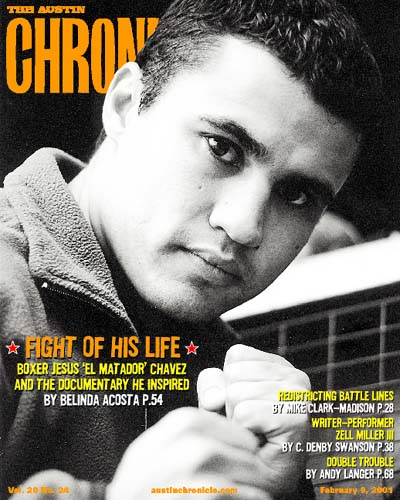 A Preview of Redistricting at the Lege

Texans for Public Justice criticizes a longstanding recruitment practice of big law firms -- paying hiring bonuses and other benefits to Supreme Court clerks who agree to join the firms after their clerkships.

Over objections from two council members, the City Council votes to reduce parkland dedication fees for the Four Seasons Residences on Town Lake, but doesn't -- as the project's developer would like -- waive the fee entirely

The New Environmental Regime; Ripping Off the Pentagon

In Texas Courtrooms, a Fair Legal Defense is Often an Empty Promise

22 is elegant in that minimalist, California sort of way, Barbara Chisholm writes. The walls are gently curved and unadorned except for their warm, soothing colors of ocher and gray. At least she thinks those are the colors; the lighting is kept very low and intimate, so it's hard to be certain.

Virginia B. Wood thought her previous column about local chef changes was pretty comprehensive until the last few days of January, when all kinds of newsworthy information began pouring in via phone, fax, and e-mail.

Where to find the fruits of the sea in Austin

On the Road Again with the King of the RV Parks.

The Austin Music Awards firm up the line-up, while Ozzy Osbourne sneaks in the SXSW back door with the film conference.

The Inspiration of Jesus Chavez

Why a top-ranked boxer, jailed once and deported twice, became the subject of a documentary and a Fighter for the American Dream

Marcy Garriott's first documentary, Split Decision, follows the vigilant struggles of Jesus "El Matador" Chavez, who continues to be punished for a crime he has already paid for. Prior to the film's release in Austin this Friday, February 9, Garriott shares her reflections on the film and on her role as a filmmaker and activist.

The Seven Wonders of Cuban Socialism

It's the Village, Idiot!

South by Southwest announces attendees, the Texas Hall of Fame releases names of first honorees, and other news and events of interest to the local film community.

Kitten With a Whip

John Waters must have loved this movie.

Like a car wreck you can't take your eyes off of.

The G-monster returns to form.

The House of Mirth

Writer and performer Zell Miller III is an incendiary device waiting for a match, and once he flicks an ember into the hidden dry undergrowth of text, there is nowhere to hide. And the good news is that he has only begun to explode.

Just when you thought that Elizabethan drama fad was fading, a slew of Shakespeares hits the scene.

Austin Musical Theatre's Oklahoma! pulses with a rousing liveliness that makes it delightfully fresh, a territory that a joy to visit.

Guy Roberts and a talented cast stage Anton Chekhov's The Seagull as a rehearsal, rather than performance, and in doing so allow the audience to watch the nuts and bolts of how a show is put together, the process of exploration, the sometimes messy, personal world of the rehearsal.

Buzz Productions' version of the cult hit Six Women With Brain Death gives it the old college try, but even a striking performance by Jo Beth Henderson can't overcome the flat mockery of trash culture that we've seen too many times before.
columns

Farewell to the Village Cinema and our own Robert Bryce.

Kudos for the Lost Austin issue, and much environmental ado.

Your pals at Pub Notes say, "Get your love on in the name of ol' Saint Valentine!" Here are some suggestions to take your lover a step or two beyond the flowers and chocolate routine and benefit a few local causes, to boot.

An icing of trivia for the cupcake of your mind.

The historic hotels of San Antonio.

The XFLdebut: It has to get better, doesn't it?.