The artist's solo show is like a large-scale, experiential temporary memorial, with fake flowers rotting in a gloomy exuberance 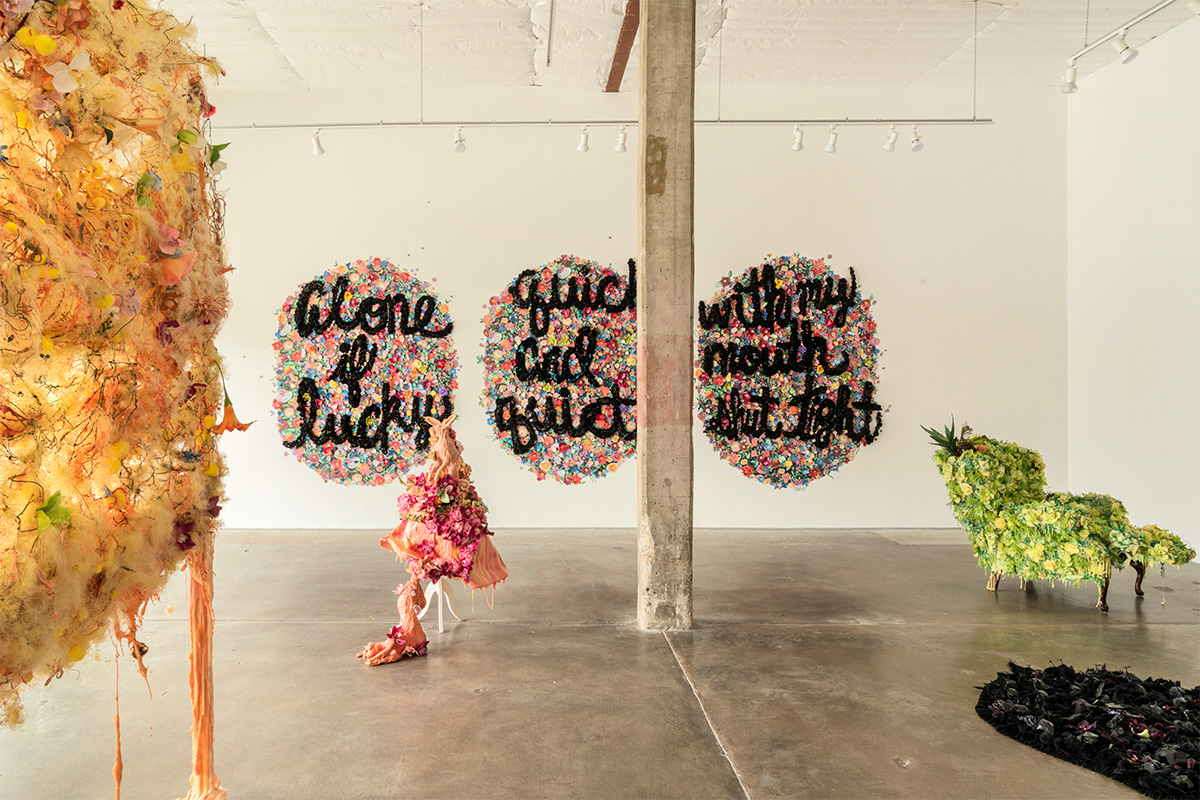 In Ann Wood's hands, the gallery space becomes a sick home, one overtaken with some kind of virus that causes an eruption of craft store goods across every surface. We are welcomed into the space by a wreath in the window, Someday This Will All Be Yours; the piece's title is a promised inheritance that manages to simultaneously feel like a threat.

Wood's solo show, "Quick and Quiet," pulls from an unforgettable moment in her life, two summers ago, when the artist's parents died within six weeks of each other. In the aftermath of those deaths, there was a lot to sort through. Things to process mentally and piles of stuff to sift through physically. Writing of that time, she says, "It was messy and gross and heart-wrenching."

The sculptural installations are instantly recognizable for those familiar with Wood's output over the past several years, but the experience of her parents' death casts her long-standing grappling with mortality and the contradictions of humanity in a more personal light. There are her familiar materials – fake flowers, pom-poms, goopy plastics, embroidery thread, foam – but their cacophony in this new context becomes a blossoming shrine, messy and gross but undeniably gorgeous. The show is like a large-scale, experiential temporary memorial, the kind that springs up organically in the aftermath of a tragedy with candles, fake flowers, and notes piled and left to the elements, rotting in a gloomy exuberance, a mutation of their designed environment.

She situates three pieces in a living room arrangement. My Father's Deathbed, a recliner sprouting sickly green fake flowers, is staged alongside Pile, a poured plastic "rug" with a thick pile of pom-poms, artificial birds, and flowers, all a sinister black. Both are set to warm before Trophy, a wildcat taxidermy form (not the carcass but the form a taxidermist would use to mold one) above an electric fireplace, emitting heat and softly shaking the citrine flowers blanketing both it and the cat. We are in a home, but nothing feels inviting. Like the hunting trophy mounted on the wall, this is a monument to death and life at the same time.

How I Hope to Die, a tripartite piece, fills a wall with the artist's preferences for her final exit in pop-up-style patterned paper and pom-poms. "Alone if possible." "Quick and quiet." "With my mouth shut tight." The words are sprawled in painstakingly push-pinned black pom-poms. "Quick and Quiet" gives us works done slow and loud, materials carefully layered and then recklessly drenched.

The tackiness is effusive and literal. Everywhere there is glue and goo dripping. Little is more visually unsettling on a purely textural level than hardened goop settled into a gunk over a soft fuzzy surface, a pom-pom, or a flower petal. The show has this phenomena in abundance. Like syrup on an angora sweater, this is femininity roughened by its own sweetness.