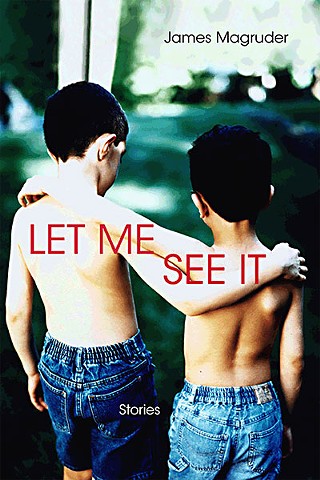 Let Me See It


Let me start this review of James Magruder's Let Me See It admitting that I would have relished reading more short stories from this collection. I suspect my desire takes its cue from the many unmet longings shared by the book's two protagonists, Tom Amelio and Elliot Biddler. As children of estranged siblings, the cousins, both gay, seek out and find each other while coming of age in Manhattan during the AIDS crisis of the Eighties. The French-speaking, erudite Elliot is a sexual and emotional seeker, a bon vivant who casts a wide but ineffectual net in his search for emotional, financial, and sexual security. Deprived of all three, he nevertheless navigates life with charm, wit, and forgiveness, maintaining close emotional ties to family and friends even as he physically distances his ailing body from them. In Elliot, the cautious Tom sees the bolder man he might have become had he grown up in a broken home, in more than one city, with siblings close in age, or had he just been willing to take risks and own up to them. The more conventionally masculine of the two, Tom offers Elliot a familial tie to a brooding, sexy Brando. On the surface, Tom's pathologies and family history appear slight compared to touching Elliot's family (religion, sex addiction, anorexia). Yet Tom's unwillingness to be clear on his feelings and his passive-aggressive attempts at Elliot's zest for living find him constantly usurping new relationships or avoiding companionship and contentedness altogether.

The 10 elegantly wrought and connected stories follow Tom and Elliot from their boyhoods to Elliot's final year in Paris, where he retreats seeking alternative treatment for AIDS and a poet's death. Each entry is a world unto itself, told variously in third and first person and offering deeper insight into a disjointed family whose whole saga remains a mystery to the final pages. A follow-up to Magruder's debut novel Sugarless (2009), Let Me See It offers a vivid snapshot of love and loss during the initial AIDS era, as well as its overlooked legacy today. The book joins a spate of plays and films that are returning to that moment, including the revival and HBO film of Larry Kramer's The Normal Heart and Terrence McNally's recent Broadway play, Mothers and Sons. Whereas each of those works also looks at the effects of AIDS in New York during that era, Magruder's stories bring geographical expansiveness and the contemplation on the life preceding that moment and still reeling in its wake.

James Magruder will read from and sign copies of Let Me See It Tuesday, July 15, 7pm, at BookPeople, 603 N. Lamar. For more information, visit www.bookpeople.com.