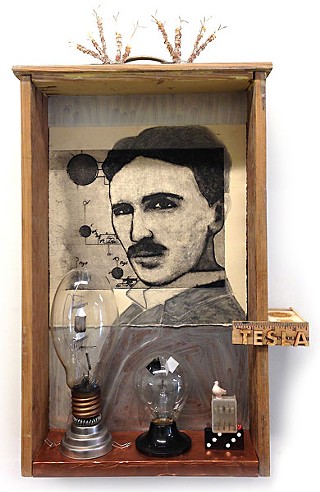 
As part of this past weekend's Tesla Project celebration, Art.Science.Gallery juried an exhibition at Invenio, the digital production studio down the hall at Big Medium's Canopy compound. There, upon the vestibule's three walls: images of that once and future genius Nikola Tesla, interspersed with related works inspired by the man and his inventions and pigeon-loving peculiarities.

Difficult, it would seem, for any artist to match the unearthly beauty of the AC induction motor conjured by that dapper Croatian engineer in years past, and yet the creatives represented here didn't strive in vain. Witness Cathy Savage's Tesla With Crooke's Radiometer, an intaglio-and-graphite portrait of Tesla forming the background within a roughhewn shadow box, relevant objects – a light bulb, a radiometer, a pair of dice (each of which displays its three-pips side), a tiny white dove – occupying the shelf overlooked by the inventor's handsome visage. Behold Tanya Davis' pair of Tesla-Punk Ducks, the cyborged waterfowl a slight tangent from her usual sculptures of clay and metal, the idea here being, the artist says, "an electric duck powered wirelessly by Tesla's coil transformer." Ponder the existential resonance of Morgan Chivers' Particulate Pulse (Inertness Is a Relative Matter), a photoprint of his sculpture in which paper-thin glass discs are suspended on a glass tube which is, in turn, suspended from loops of live wiring; this is technology in the service of art, generating both depth and aesthetic brilliance.

More, too, to be seen in this small Invenio space; meanwhile, back at Art.Science.Gallery, the reason this exhibition isn't on those walls: the "Lifecycles" show featuring the sculptures of John Self and Matt Norris. Self creates caricatures of animals with a wild variety of found objects, and his fabricated creatures range from the goofy-whimsical (that's a pig over there, right?) to the ingeniously evocative (Eden never knew such a cunning serpent as Self's vacuum-hose snake). Norris renders bicycle chain, nails, and carefully cut and polished lozenges and shields of sheet metal into stunning replicas of arthropods, his battalions of oversized ants and pill bugs swarming over the pristine walls, accompanied by the odd spider and a squadron or two of large dragonflies boasting etched-copper wings.

"What we need more of is science," as Chris Onstad's Achewood reminds us. That goes double, we suggest, when what's inspired by or created through science is as pleasing to the eye and stimulating to the mind as this fine pair of shows.