When last we saw our intrepid reporter, he was going under the knife – er, the scissors – of a pair of 10-year-olds who'd been briefly trained in the tonsorial arts for the Fusebox-presented Haircuts by Children event during the East Austin Studio Tour. (See "Shear Faith," Nov. 11.)

Well, we can see that reporter again, but much of his hair will be missing, the absent follicles further shortened to, shall we say, reinstate equilibrium after his shearing at the hands of young Mike and Mariah at the Peacock Salon last Thursday night.

But, y'know, there's a reason why stylists are trained professionals and usually steeped in years of coiffing experience. And there's evidence as to why those with somewhat less experience, who are well-meaning but well-meaning fifth-graders, might do better to heavily practice barbering via the interactive Wii before tackling actual meatspace heads of full, glorious (read partially balding) hair.

Evidence, we say? Yes. For your consideration, dear reader: The back of Brenner's manly skull-pelt, after the sharp attentions of 10-year-olds. 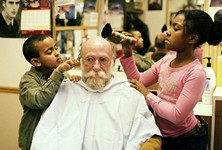