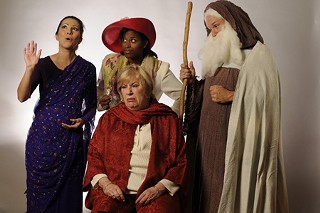 During life, we seek to understand death and, most pressingly, what happens after death. Many take comfort in reincarnation. If you screw up in this life, you can try to do better in the next. As a worm or a king. But what if you hated life on earth so thoroughly that rather than a second chance, you preferred general anesthesia? If life is living hell, why go back? Miss Witherspoon – Christopher Durang's treatment of reincarnation, suicide, and the netherworld – is at times clever, at times amusing, but it has trouble transcending its own gags in order to achieve the ethereal.

The play centers on the title character, who hated life and killed herself. Thus begins a battle of wills between Miss Witherspoon and her bemused spirit guide, Maryamma. The premise of an earthly woman residing stubbornly in the Bardo and refusing to reincarnate is full of potential. Trouble is, Durang uses it to only shallow ends, creating a series of brief scenes and running jokes. We see essentially the same scene play out over and over: The swirling lights of reincarnation turn on, and Miss Witherspoon grips her chair and shouts defiantly, trying to engage spiritual emergency brakes. Sometimes she succeeds, in which case she continues to discuss her own bad attitude. And when she doesn't and ends up back in the land of the living, she is miserable and does her best to commit suicide as soon as possible. Of all the different lives that a soul could inhabit, Durang bothered to imagine only three – and all three occur in the same limited American reality.

To stay buoyant, this material needs to be spun quickly, but Different Stages' production belabors the many minor points so that, though this is a short play, the time does not pass quickly. Jennifer Underwood inhabits the title role and is a compelling guide through Durang's repetitious brainstorm, though at times she seems underwhelmed by her material. We see Underwood's power and depth as a performer not when she is Miss Witherspoon in the Bardo but rather when she is back on earth as a suicidal two-week-old baby or a white-trash teenager or a dog. Underwood also creates a nice transition from a woman who has no hope to a woman who becomes ever so slightly engaged in life. Suzanne Balling draws the character of Maryamma with clear, sharp lines. She and Underwood make a pleasantly odd couple. Camille Latour, Derek Jones, and Patricia Robinson round out the cast and provide a series of caricatures that populate Miss Witherspoon's journey. Much like the material, the production doesn't dig too deep. It is amusing and sufficient but rarely surprising or moving.

Miss Witherspoon is an essentially pessimistic piece with some sugarcoatings of humor and optimism. Durang conceives of Jesus Christ (appearing as a black woman in a fantastic hat) and Gandalf (not the fictional character but the sage soul who inspired the fictional character) as distraught at the current state of the world. They plead with Miss Witherspoon to go back and live better. Go reteach the teachings of Christ. Go heal the political wounds. Miss Witherspoon is predictably unenthused at the prospect of doing good works, but having no choice, she requests not to be sent somewhere awful like Iraq or Syria. Gandalf and Christ relent and allow her to return to an upper-middle-class American life. Durang's Miss Witherspoon acknowledges that life can be a living hell, but it encourages us to be, to the best of our ability, pacifist Christians who work to overcome the tribal nature of modern war. And if we are lucky or stubborn, we can do our good works from a comfortable place like Connecticut.