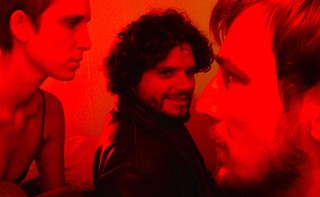 Adam Rapp is a nationally recognized and widely produced playwright. His work offers a heady mix of testosterone and vocabulary. There are lots of people who love the tortured, sensitive, intellectual guy characters who populate his works.

Red Light Winter is a script that some will defend, but it has faults that run deep. The production by Displaced Theatre Company (its first in Austin, directed by Sydney Andrews) tries, but if your blueprint is flawed, the building is still a mess.

According to Displaced Theatre's materials, the play is "fearlessly autobiographical." That's hard to believe. Two men in their late 20s, Matt (Mark Scheibmeir) and Davis (Harrison Butler), are visiting Amsterdam so Matt can receive the services of a legal prostitute. Poor Matt: He's a ball of anxious self-disgust and shame, and there's no apparent reason why he would continue to be friends with Davis, whose greatest pleasures come from causing other people pain and discomfort. Davis also stole Matt's last girlfriend more than three years ago, but that hasn't sullied the friendship either.

Then there's Christina (Jenny Connell), the pretty, sensitive, indie prostitute who's read Henry Miller and likes to sing. Dudes: Have you been to the Red Light District? Those ladies ain't pretty, and I'm almost certain they haven't read Tropic of Cancer.

All of this culminates in a strenuous mix of misogyny and illogic.

There is also nudity and sex. It is not subtle. The producers sent an e-mail the day before the performance to alert audience members that there would be nudity and that the play would be performed in close quarters. All the same, it is weird, to say the least, to be sitting in a tiny room with two completely naked actors pretending to have bad sex as the audience looks on like spectators at the seventh hole of a golf tournament.

Reviewers of other productions of Red Light Winter have dismissed the sex and nudity as incidental, which suggests to me that staging the play in an efficiency apartment was not a good choice. A traditional theatre venue, with its artificial separation between audience and performance, might have provided the space to make those voyeuristic moments something to move the play forward rather than hijack it. Certainly, some will protest that they felt perfectly at ease watching naked actors miming the sex act from eight feet away. Everybody has his or her own threshold for discomfort. Red Light Winter requires a high one.

Also, this production is not for the mobility impaired. It is site-specific and requires you to park in one location for act one and walk down a dark hill on a busy street with no sidewalks, stepping over stray wires from stomped fences. Then you drive to act two, whose location I won't betray, but it rhymes with Schmanor, and there are no elevators.

The cast does a pretty good job. They have two huge challenges: Rapp's dialogue wants to be realistic but is so overburdened with intellectual references and hefty vocabulary that it's hard to get a natural reading out. Also, in this production, the audience sits within feet of the actors in an efficiency apartment, creating a filmlike intimacy. But in film, actors get as many takes as they need. Here, staginess occasionally intrudes on three hardworking actors who have to keep it up in the audience's lap for 2½ hours.

The performances each have moments of grace. They are not enough to compensate for the producers' bad choices.