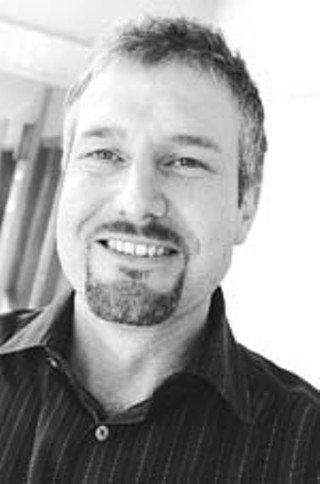 For Joe Conway, it all began with a game of basketball. A UT grad who had been teaching English at St. Stephen's private school since 1989, Conway had always liked movies, but he had never before written a screenplay. Now, his very first script, Undertow, has been directed by the hot young director David Gordon Green (George Washington, All the Real Girls), and is opening in Austin this Friday as part of a national release.

Conway recalls that one day a St. Stephen's alumnus, the legendary film director and producer Terrence Malick, called out of the blue and asked if he could join Conway's regular pickup basketball game with teachers and friends. "At the time, I didn't know who he was," Conway confesses. "It was before Thin Red Line, and I had never seen Badlands or Days of Heaven. I think I asked him what he did. He said he was a writer, not too much more than that. But over the months we played basketball, became friends, and it was only later that I went and watched Badlands because I think they were out of the video I really wanted at Blockbuster.

"Malick and Ed Pressman [a gifted and also legendary independent producer, who had executive-produced Malick's Badlands, along with 70 or so other films] had formed this company and they wanted to specifically take some people who were new to screenwriting and get them to write screenplays and build a library of really great scripts from fresh people. Even though I was a little bit older than some of the others in the group who were fresh out of film school, I hadn't written a screenplay before. So Terry asked me if I wanted to." Malick had seen a play that Conway had written for middle-school audiences and told him, "'You can write some dialogue that's good. Especially for young people.' So that's how we focused on talking about Undertow, a young person's story.

"Malick had this story idea and brought it to me and I wrote it," Conway explains. The kernel of the story came from a message left on a runaway hotline in which a teenager tells this story "about his younger brother he had to leave behind, and how he was looking for grandparents. Then he started to elaborate. There wasn't a clear sense that he was telling the truth, and maybe this was all fictionalized." In a separate conversation, Green recollects that "the interpretation was very exaggerated from the get-go. We don't know how much of it is true, ultimately, or not, because from the first telling of the story it had a lot of tall-tale elements to it. It was very unrealistic."

Yet all three men found something evocative in that runaway's plight. Conway describes it as "a new Huck Finn voice. That innocent, even hopeful voice in the face of great tragedy – the kind that would knock out most adults." Green elaborates: "It had echoes of fairy tales to me in the way a child would interpret or psychologically deal with tragic circumstances in life. I approached it as if the tragic circumstances were reality and embellished it to be more adventuresome, more something the kid was proud of than a devastating situation."

Most reviewers have described Undertow as a Southern Gothic. Green's previous two features were notable for their moody Southern locales, but Undertow adds a layer of formal narrative structure – an element that was intentionally elusive in his previous films.

For Conway, the Southern Gothic aspect came naturally. "I'm a big fan of Flannery O'Connor," he notes, "and when I was writing Undertow, she was an influence on me. I consciously wanted to mix the horror with the humor like she does. I've been teaching Flannery O'Connor for years, and there's some of Huck Finn in it, too: the young boy and his innocence in the face of this human, adult violence was really influential. The Catcher in the Rye, too. And then David brought his visual sensibility – all those movies he used to watch on TBS and elsewhere, like Macon County Line and Walking Tall. It's so funny that those movies that David saw on television in the late Eighties, early Nineties, I saw at the drive-in in the late Seventies [there's about a 12-year difference between their ages]. His retro is my youth," Conway laughs.

Once Conway's script was finished, Malick brought it to Green. "He called and said he had this script written by an Austin writer and that he was interested in developing it with me," Green recounts. "Of course, when you get a contact like that, your interest peaks, and you investigate. It ended up becoming a wonderful development process, working with Joe and Malick and Ed."

Next, the company flew Green down to Austin, where he holed up with Conway at his home for a week and worked on the script. "We worked on it together," Conway says. "We'd wake up in the morning and go out on my back patio and just start. He'd say 'You know what? I had this vision of a kid getting a nail through the foot,' and then he'd leave it to me to work it into the story or to see if it would even fit in the story. He would bring that aspect of it, and I would bring the focus on story that came from my teaching background."

That scene with the nail through the foot belongs to Undertow's opening sequence. "I had the rock through the window and the chase," Conway explains. "And then David said, 'Let's end that chase with an exclamation point.'" Green describes his punctuation as "trying to deal with the fantastic but with a very grounded execution. Trying to bury plot was a big thing for me. To play within the genre and work within clichés, but not cater to the clichés. Try to twist the clichés and redesign them and make them distinctive."

Another Green exclamation point can be seen in the evolution of the story's sickly younger brother. Conway's frail kid grew more pathological under Green's adaptation. "'Oh, he's sickly,'" Conway describes Green as saying. "'Let's give him an anxiety disorder and have him eating dirt and throwing up so we know he's a little off so we worry about him.' He's an odd little boy, and I think David was really going for that, because he had a little of that in his past. He was a kid who would think about infinity, a little bit of a loner, and I think he wanted that little boy to be him. In a way I think they're all him. Jamie Bell [the older brother] looks so much like him. It's uncanny."

Like all of Green's films so far, Undertow shares one further Austin connection: its music. "Austin musicians David Wingo and Michael Linnen have done all my stuff, even student films that I worked on," Green says. "I've known Wingo since we were about 5. We grew up together. And then we went to the University of Texas together. Wingo started hanging out with the local music scene. And Linnen is in a band called Monroe Mustang. They just kind of hit it off musically and had very similar tastes to mine. Where they favored the musical elements, I favored film, but we all were very into both. So, it's been a natural collaboration. They have a lot of resources in terms of friends and equipment and musical talent that we were able to utilize in very economical means. In a movie like this where it's really low budget, you just try to put every dollar up on the screen of course. So, it's great Wingo has that access and can make one dollar sound like a hundred dollars."

Undertow also features music contributions from Philip Glass, because "in this project, it was really important to me to have a more fanciful orchestral score and have children's choirs and strange instruments and kind of an elegance to the score that my other films hadn't had. I certainly have a lot to learn, and it's guys like him and Pressman and Malick, who bring their experience and relationships to their work, who are really helpful for young assholes like me and my crew." As well as for a first-time screenwriter named Joe Conway.