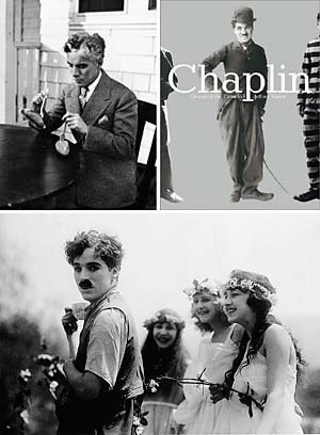 (bottom) Chaplin, holding a teacup, amuses the young women cast as the nymphs during a break in location filming for Sunnyside.

Chaplin: Genius of the Cinema

Charlie Chaplin died Christmas morning 1977, an irony the 20th century's king of comedy would have rued. The Dickensian tramp, whose impoverished London youth once included a single orange for Christmas ("for the rest of his life the holiday reminded him of his early poverty"), lived just such a life: tragic, comic, epic. It's a life scholars and biographers have spent lifetimes documenting, one that Jeffrey Vance, once a Chaplin family archivist, tells through the comedian's own medium. As Chaplin historian David Robinson is happy to report in the introduction to Chaplin: Genius of the Cinema, "the raison d'etre of this book is not so much the text as the photographs." The subject himself followed My Autobiography with My Life in Pictures, and Vance's weighty, luminous endeavor adds 500 moments in time to the public record. Photographs black as oil with milk on their whiskers: Chaplin and Buster Keaton, sharing their only scene in the twilight of their careers; Chaplin, out of costume, his wavy hair gray, practicing the "Dance of the Rolls"; Chaplin and Helen Keller; Chaplin and Gandhi; Chaplin and the Einsteins. Chaplin's self-described "little one" (the Tramp) on movie sets pantomiming for children and delighted young women. Paulette Goddard with an armful of forbidden fruit. An alternate ending for Modern Times. Vance's biography, meanwhile, holds its own on the coffeetable-tome front, encyclopedic in research and tone, with a teaspoon of tabloid. Most anecdotal exposition is excerpted from Chaplin's and those concerned parties' autobiographies. Blurbs on Chaplin's early shorts give way to chapters on his cinematic miracles (The Kid, A Woman of Paris, The Gold Rush, City Lights), alternating with entries on his romances (Pola Negri, Marion Davies, most of his co-stars) and trendsetting Hollywoodisms (inspiring Lolita, sensational star divorces, and an ugly paternity suit). Captions reveal as much as the text. Four hundred pages and not one color picture later, it's obvious why Walt Disney, Chuck Jones, Ernst Lubitsch, Billy Wilder, and generations of filmmakers and comedians worshipped (worship) Chaplin. "Tragedy is very essential to life," he explained, "and we're given humor as a defense."