"Ever since my voice changed, I wanted to be in the company of the newspaper greats," thinks investigative reporter Johnny Barrett to himself early on in Fuller's predecessor to The Naked Kiss. "And this long corridor is the magic highway to the Pulitzer Prize." 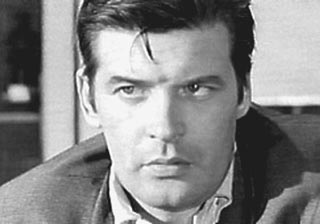 "Ever since my voice changed, I wanted to be in the company of the newspaper greats," thinks investigative reporter Johnny Barrett to himself early on in Fuller's predecessor to The Naked Kiss. "And this long corridor is the magic highway to the Pulitzer Prize." Barrett (an excellent Breck, providing a model for Alec Baldwin should he ever do McMurphy, or McMurphy should he ever do Alec Baldwin) is convinced that he'll break the story behind the murder of a mental hospital patient if only he can spend some time with the erstwhile witnesses: a former P.O.W. who thinks he's a Confederate general (Best), a James Meredith type who "failed" as the first black student at (the fictional) Southern University and now fashions KKK garb out of bedsheets (Rhodes, by far the best actor here), and a brilliant nuclear physicist whose guilt has strangled his brain into that of a 6-year-old (Evans). To reach this trio, Barrett fakes "erotic dementia," which apparently means that he wants to have sex with his sister, or at least to play with her braids a lot. With the reluctant help of his stripper girlfriend Cathy (Towers), who goes to the authorities in the guise of that sister, Barrett succeeds beyond his wildly ambitious dreams: The doctors buy it part and parcel, diagnosing the ace newspaperman with a form of delusional schizophrenic fetishism and committing him to the scene of the crime. But this is a Fuller film, and this success, of course, is doomed. As foreboding as Euripides' oft-quoted "Whom God wishes to destroy he first makes mad" that prefaces the film are Cathy's pleas to Johnny at Shock Corridor's outset: In a monologue that hop-scotches from Greek chorus to Twain to Dickens to Moses to horse racing to Hamlet and finally to Freud, she warns Johnny and his editor that the insanity in the asylum's air will "rub off" on him. She's right in a big way. While Fuller's otherwise sharp script paints the insane in wildly erratic strokes, his sensitivity toward them is unmistakable, and Shock Corridor -- a necessary American movie for many reasons -- is typical of the cult maverick's peculiar brand of melodrama mixed with allegorical social commentary and a sense of humor (Gilliam must be a fan), a cinematic protest song whistling with alternately misfired and heat-seeking lyricism. Stanley Cortez's (The Magnificent Ambersons, The Night of the Hunter) black-&-white photography only intensifies Fuller's explosions: His creepy close-ups, tight angles, and choppy, shallow shots render everything elusive, steadying his director's sermonizing with an artful hand.