Bargaining begins at largest hospital in the state to unionize 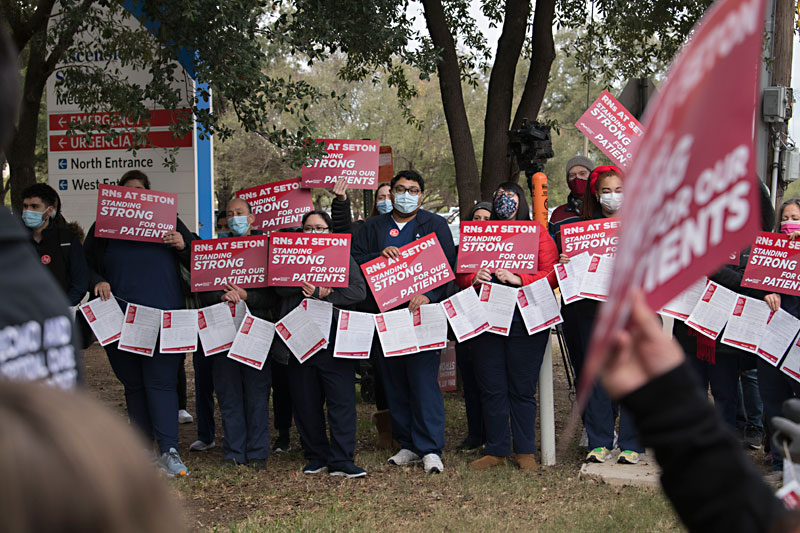 Last Thursday, Nov. 17, a crowd of more than 100 nurses rallied in front of Ascension Seton Medical Center on 38th, holding a giant banner that read: "Don't mess with Texas nurses." The rally came ahead of the first contract bargaining meeting since Seton nurses unionized in September with the National Nurses Organizing Committee/National Nurses United, which represents 3,300 nurses in Texas. The Seton facility is the largest private hospital in the state to unionize, with over 900 nurses represented.

Samantha Steel, who has worked at Seton for eight years, says the union effort was galvanized by chronic understaffing and high turnover, which led to nurses working far outside their job descriptions. "Nurses are performing more than just their nursing job. A lot of times they're having to do the clinical assistants' jobs, the janitorial jobs. The desk clerks have been reduced [and] charge nurses are having to answer phones that are ringing nonstop. Charge nurses are having to take patients because we don't have enough RNs."

Negotiations will be "mainly focused around our patient care protocols, processes, procedures," says Matthew Clark, a nurse for seven years, "as well as staffing efforts to retain the nurses that have the experience that we need as well as acquire new nurses to fill the staffing gaps." Though some of these issues were exacerbated by the pandemic – "a lot of nurses suffered a great deal of moral injury and moral fatigue," Clark says – they've been going on for years.

"We just wanted to show unity in numbers and show Ascen­sion that, you know, over half of the nurses are gathered here," says Clark. "We're hopeful that they will be amenable to our … patient-centered focus proposals that we are presenting today to them." The same day, organizing nurse Kellen Gildersleeve dropped by the Starbucks on 45th and Lamar to support their national strike, and told Defector, "A lot of our nurses probably stop by this location on the way to work, and we want to support. It's all connected."