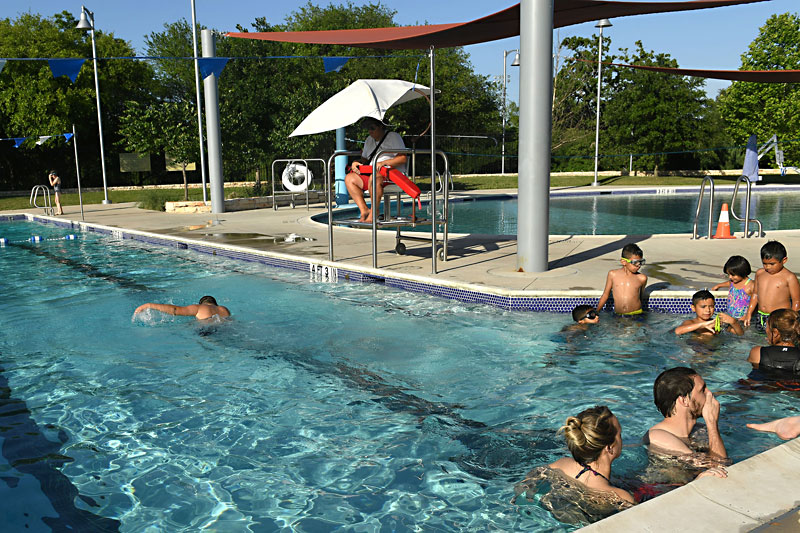 With the city of Austin facing a lifeguard shortage that has prevented it from opening more than half of its city pools at the start of the summer, a group of lifeguards is organizing for the wages and benefits it believes will alleviate the shortage. Citing the examples set by unionizing Starbucks and Ama­zon workers, Lifeguards United is pushing for a $22 per hour minimum wage and a host of other enhanced benefits including holiday pay, paid time off, and reclassification from temporary to full-time city employees.

The current shortage is significant. Accord­ing to Aaron Levine, an aquatic supervisor with the Austin Parks and Rec­re­ation Department, the city only had 237 lifeguards on its payroll as of late May, with roughly 120 more in training. It needs nearly three times as many lifeguards to fully operate all of its facilities.

"COVID killed our momentum drastically," Levine said. "We had 850 lifeguards in 2019, for that summer, and most of those were in by June, we operated no problem, it was real easy ... And it was $15 per hour. The only thing that's really changed is we stopped training in March of 2020, huge economic depression, labor shortage, people got out of the workforce." Levine also noted that it's not just PARD that has struggled to fill job openings, nor is Austin the only major city struggling to fill lifeguarding jobs this summer. Chicago, Minneapolis, and Philadelphia are all also facing shortages, with the American Lifeguard Association warning back in March that a third of U.S. public pools were in danger of not opening for the summer.

Scott Cobb, a Lifeguards United organizer who has lifeguarded at Barton Springs since 2018, said that it's not a mystery how Austin and other cities could solve the shortage. "They could have already implemented a $22 wage," he said. "That would have gotten a lot of people to come back to lifeguarding and it would have gotten a lot of new applicants, and the pools would not face being closed. It's going to be very hard on the people of Austin in June when a lot of the pools are going to stay closed."

“It’s going to be very hard on the people of Austin in June when a lot of the pools are going to stay closed.” – Lifeguards United organizer Scott Cobb

Cobb pointed to Massachusetts as an example for Austin to follow. There, the state Department of Conservation & Rec­re­ation raised lifeguard wages to between $21 and $26 per hour. Though Massachusetts is still dealing with shortages in a select number of communities, the department's commissioner told WCVB in Boston that the commonwealth is "in a much better spot this year than we were last year."

Already, Austin has bowed to external pressure to raise wages. Earlier this year, the city raised the general starting rate for lifeguards from $15 to $16 per hour, and has been offering up to $1,250 in bonuses for new recruits who sign up promptly and work the entire summer.

It has not, however, committed to the raises that lifeguards believe would end the shortage. Cobb said that his group has received support from the city Parks and Recreation Board as well as several members of City Council, but they ultimately need action from the full City Council to further raise wages.

The city has 34 lifeguarded aquatic facilities, with one closed for renovations. Just 15 of those facilities will have opened on June 6, while the others remained closed – including a number of free neighborhood pools spread throughout the city.

Lifeguard frustration with the city is not limited to wages, Cobb said. He believes he contracted COVID last winter at a department training conducted in the midst of the first Omicron surge, while the lack of holiday pay, barriers to affordable health insurance, and unpaid training have made the job less attractive to prospective applicants. "We work on Juneteenth or Memorial Day, we will not get time-and-a-half – but our managers, who are full-time employees, they will get time-and-a-half on Memorial Day," Cobb said. "And we are required to make ourselves available on holidays, because it's a busy day at the pool. So we can't just say we don't want to work on holidays ... but we're not paid time-and-a-half."

“COVID killed our momentum drastically. ... The only thing that’s really changed is we stopped training in March of 2020, huge economic depression, labor shortage, people got out of the workforce.” – PARD’s Aaron Levine

Levine, noting that many of the city's lifeguards are high school and college students who are only available for seasonal work to begin with, argued that the job is already well-suited to meet its employees' needs. "It's lots of fun, it's flexible, we're outdoors, [and] $16 is great pay for a temporary, seasonal job."

Indeed, Austin's payscale for lifeguards is among the highest in the state, but it has nevertheless failed to keep up with inflation and cost-of-living increases since the onset of the pandemic. "We should have a core group of lifeguards who are full-time city employees with full pay and benefits to reflect that," Council Member Chito Vela, a former Barton Springs lifeguard, said at a Council meeting in March. "It's always been strange to me that we don't."

Cobb said that if Lifeguards United and its allies are unsuccessful in their push for a $22 per hour wage, they'll consider launching a unionization campaign. He sees the organizing effort as something that will ultimately benefit not just lifeguards, but the entire city.

"We're going to continue to push for 22, so there is not a lifeguard shortage next spring," Cobb said. 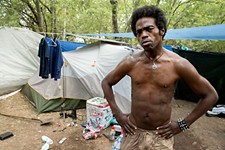 Neighbors With and Without Homes Collide at Roy Guerrero Park
“But then where?”