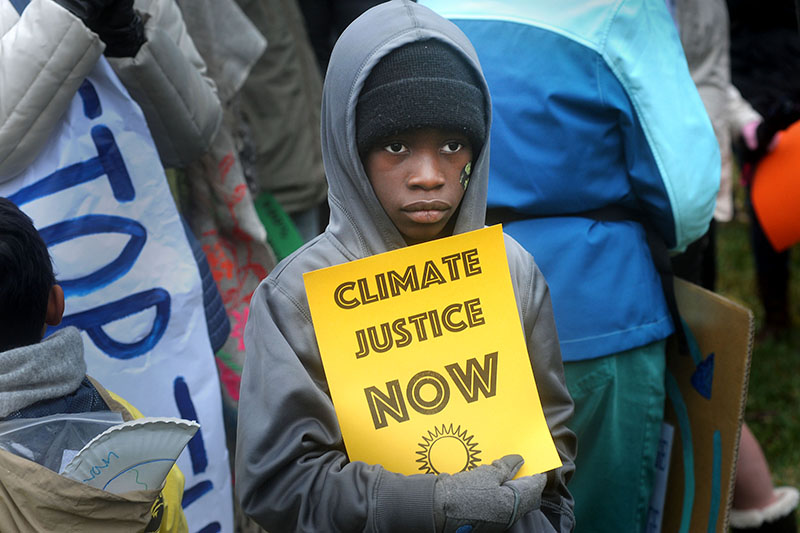 The Sunday after Thanksgiving, nearly 1,000 people gathered at the Texas State Capitol to gather support for the Global Climate Movement. The rally came a day before the Paris Climate Conference, where President Obama said any agreement to lower carbon emissions should be transparent and "legally binding." (Photo by John Anderson)

Construction on the bike-and-pedestrian bridge set to run alongside MoPac over Barton Creek is experiencing another round of delays this week – and could be shelved for the next month, or maybe more. On Monday, the Statesman reported that a "paperwork glitch" was to blame for the holdup, citing a spokesman for the Texas Department of Transportation who said TxDOT staff had no completed review of a work plan submitted by the contractor.

Travis County Commissioners unanimously approved an application Tuesday from the Sheriff's Office to get the ball rolling on implementing body-worn cameras on officers throughout the county. No timetable is set, but expect a pilot program first – one that Judge Sarah Eckhardt envisioned would look a lot like APD's (barring any glaring inefficiencies on that department's part). The initial $100,000 budget will help outfit roughly 50 officers. See "Citizens Voice Concern Over Body-Cam Accountability," p.24.

A Monday afternoon shooting outside of the Austin Resource Center for the Homeless (ARCH) has left Westly Adams Barnes on $150,000 bond in Travis County Jail on charges of aggravated assault with a deadly weapon. Police reports list Antuwan Dwayne Mims as the victim. He was taken to Brackenridge Hospital with what were considered life-threatening injuries.

Travis County Constable Sally Her­nan­dez is hosting a get-together at the El Mercado on Lavaca Street this afternoon (Thursday) to announce whether or not she plans to run for Travis County Sheriff. Which direction she goes is anybody's guess (wink, wink), but the Chronicle notes that Hernandez has been one of the most vocal candidates for the position without officially being in the race.

No campus carry at Rice University: On Nov. 30, President David Leebron announced his university will follow Texas Christian University and use the opt-out clause open to private schools from the law passed last session. Public universities such as UT-Austin are still discussing how much of their campuses they can keep gun-free.

Sen. Ted Cruz's grandstanding pays off as he, surgeon Ben Carson, and Florida Sen. Marco Rubio tie for second in the latest Quinnipiac GOP primary poll. However, the numbers show Donald Trump further extending his lead, and both Hillary Clinton and Bernie Sanders would crush Cruz in the general election.