Stone Deaf Forever! (Sanctuary) Killer. Three decades of Lemmy crammed into a 5-CD cardboard box. It's almost too much rock to stomach. Beginning with Lemmy's previous band Hawkwind's 1975 version of "Motörhead," disc one of SDF rips through 22 lo-fi tracks from the band's toddler years, plus previously unreleased recordings from 1978's John Peel sessions. Yet it's the second disc, sandwiched by "Ace of Spades" and "Dr Rock" from a BBC Friday Rock Show recording, that really greases the gears. The third and fourth CDs follow the Londoners through forays into rockabilly (1989's "Black Leather Jacket"), Zippo rockers ("I Ain't No Nice Guy" with Ozzy and Slash), and a couple of embarrassing Nineties ballads that rank with Whitesnake's and Guns n' Roses'. The fifth disc brings whiskey-drenched bootlegs, rarities, and hits off Motörhead's No. 1 live album, No Sleep 'Til Hammersmith, recorded the way Motörhead should be: fast, heavy, and fucking loud. Pair these five full-tilt discs, which include 20 unreleased tracks and three versions of "Orgasmatron," with an extensive 58-page booklet and a show poster, and you have one hell of a box set for fans and completists alike. Motörhead rocks harder than a Mack truck driving through a hurricane, and Stone Deaf Forever! proves it. -- Darcie Stevens

Music to Crash Your Car To, Volume 1 (Hip-O) Funny, that doesn't look like a '72 Ford Pantera on the cover. That's what Crüe singer Vince Neil manslaughtered Hanoi Rocks drummer Razzle in one debauched night 1983. Twenty years later, on the eve of another reunion, L.A.'s updated answer to Kiss continues its car-crash career. Marrying the Ramones' three-chord monte with metal's bombast, MTCYCT piles up the Crüe's first four albums, but leaves the initial Vince era hanging with the exclusion of Dr. Feelgood (two more 4-CD volumes are due). Most of the nearly two dozen bonus tracks appeared on the catalog's recent reissues, with Japanese extras like "Tommy's Drum Piece" lacking only "of Crap" to be aptly titled. Even then, this accident demands a certain amount of aural gawking. The group's debut, 1981's Too Fast for Love, represented here with both the indie "Leathür" mix and the subsequent Elektra version (digital technology has rendered the difference mostly moot), maintains a scrawny, Fifties drag race down the Sunset strip feel. Commercial checkered flag, '83's Shout at the Devil, remains a classic hairpiece, runty pop fed through a shredder (Mick Marrs). Theatre of Pain ('85) has aged better than it deserves despite its Poisonous spew (the demos best the album in chunky goodness), but Bic Hall of Famers "Home Sweet Home" and an update of Brownsville Station's "Smokin' in the Boys Room" forgive all. Girls, Girls, Girls ('87) had its moments ("Wild Side"), but mostly the Crüe was already preoccupied with behavior to crash their lives by. -- Raoul Hernandez 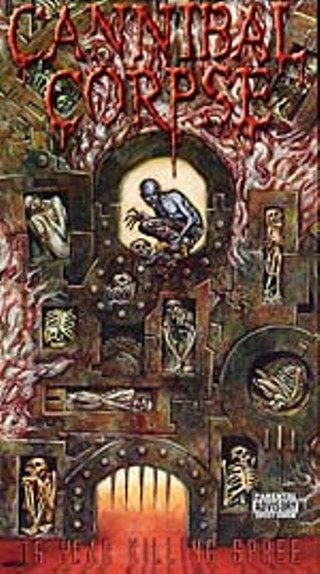 There are only two reasons why Cannibal Corpse has survived the last 15 years without changing their style: 15-year-old loners and 30-year-old speed freaks. Not to say that extreme death metal with amazingly lurid, indecipherable lyrics and lots of hair-thrashing doesn't hold its rightful place in music history, but Jesus, do we really need to relive it? This 4-disc set -- creepy cover art and Vince Locke zombie comic aside -- deserves nothing more than a burial. Eaten Back to Life (1990), Butchered at Birth ('91), and Vile ('96) represent the majority of the first two discs along with the worst Black Sabbath cover ever in "Zero the Hero." The third CD is "unreleased" material, which consists of the band's first demo and studio tracks that were redone for Vile and '98's Gallery of Suicide with a couple of true unheard head-spinners thrown in for good measure. The DVD isn't only extremely poor camera quality and distorted sound, it's also unbearable to sit through. How long can one watch an out-of-focus Chris Barnes whip his head around while shredding his vocal cords and standing stock still on a charmer like "Entrails Ripped From a Virgin's Cunt"? Which brings up another point. Cannibal Corpse's song titles are enough to make a riot grrrl blush: "Addicted to Vaginal Skin," "Stripped, Raped and Strangled," "Fucked With a Knife." And the censors are worried about Marilyn Manson. Does Tipper Gore know about this? -- Darcie Stevens

Soundtrack to the Apocalypse (American) Formed in L.A. 20 years ago with the goal of being "the fastest, heaviest band on the planet" (achieved according to Kerrang! in 1996), Slayer fuses sinister lyrics with dual battle-axe guitars and teeth-jarring rhythms. The 4-disc Soundtrack to the Apocalypse is nothing less than the heaviest metal history, then, from Slayer's early wood-shedding to last summer's European tour; all the faves are here: "Necrophiliac," "Sex.Murder.Art," "Dead Skin Mask," and "Jesus Saves." The first two discs hold the band's most well-known cuts, including collaborations with Ice-T and Atari Teenage Riot, while the third and fourth house unreleased audio and video material, respectively. If you had to pick one, it'd be disc three, with live cuts, demos, and rehearsals. The DVD has early footage of the band, but since the sound quality is piss poor, it's more archival than anything else. Footage of the band playing live in Japan, as well as performing "Bloodline" on ESPN, is a keeper. Along with liner notes, the Soundtrack ammo box holds an enlarged version of the liner notes (with better pictures), the notorious Seasons in the Abyss blood pack, a band laminate, and a Slayer logo wall hanging. The uninitiated -- or just plain frightened -- will abhor Soundtrack to the Apocalypse, but die-hards will kill for it. -- David Lynch