Death and community explored in this skateboard short 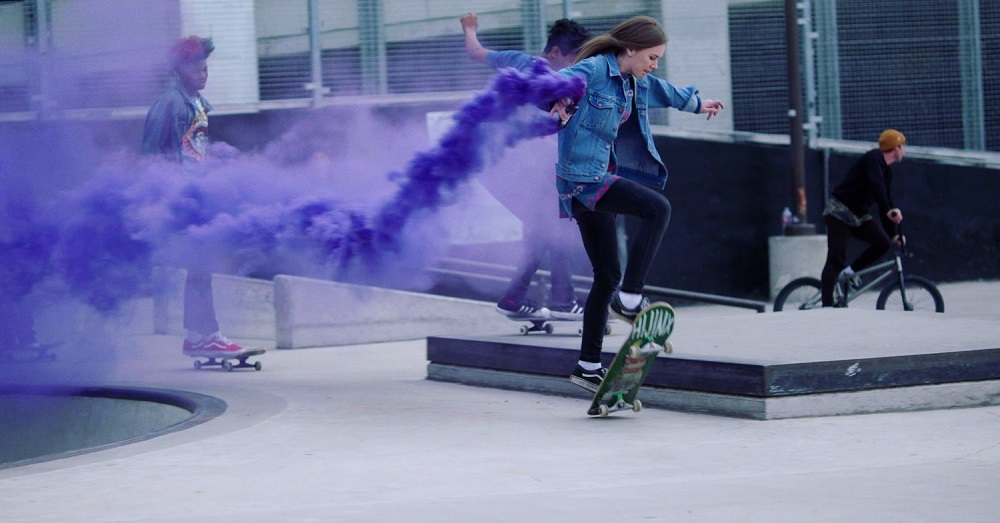 Gone in a flash: Skate culture and loss in Katherine Propper's "Street Flame."

Welcome to Now Streaming in Austin, highlighting locally made titles to watch while self-quarantining.
An accident. A death. Mourning. Skating. All part of Katherine Propper's short film about how teens tackle grief and loss, "Street Flame."

Propper, currently taking her MFA in Production at UT Austin, made the film as her second year project, and drew deeply on Austin's skate culture (with pivotal scenes at the city's Heath Eiland and Morgan Moss BMX Skate Park at North Lamar and Shoal Creek) for the story. However, it's also a more universal examination of loss, and how we process it.

After a successful and award-winning run on the festival circuit in 2019, it is now available on YouTube through short curators Omeleto. The filmmaker talked to us about how personal experiences shaped the story, how people can be present even in their most final absence, and the unique elements that made this a distinctly Austin film.

Austin Chronicle: As a culture, we're very bad about talking about death and grief: what made you want to tackle it head-on here, especially with how it affects teenagers?

Katherine Propper: When I was in high school, there was a time I lived itinerantly at friends’ houses. During that time, I remember feeling the intensity of the friendships I had... "Street Flame" reflects on these kinds of friendships that become akin to family, especially for kids who are on more unconventional paths.

From spending time with the group of friends who the film is based on, I was struck by how much compassion and care these teenage boys have for each other and how so many of them had already experienced the loss of peers at a young age. From hearing their stories, I knew I wanted to make a film that was about the close bonds of their community, but also about their rituals and the way they approach life and death despite tough circumstances. I think invincibility is something that teenagers are more likely to feel, and the characters in "Street Flame" are confronted with their own mortality, which can often be at odds with their lifestyle.

At the same time, these characters are deeply concerned with legacy, and a lot of their time is spent leaving their mark on things – like in repurposing a cement tunnel or even with tattoos. On another note, I am personally interested in the way any human being faces the reality of their own impermanence.

AC: There's something akin to Sofia Coppola's The Virgin Suicides here, with young men stumbling through the emotional fallout of a young woman's death. What was the writing process for making Jinx a presence through her absence?

KP: During the writing process, I was thinking about visual motifs and objects that can symbolize or reflect a person’s spirit. Jinx is only physically present in the film briefly, but the things she left behind — her graffiti, her pictures, her skateboard, her shoes, and friends — these things all attest to her life and memory. A lot of my attention in the development stage was placed on setting up these details and writing them into the story as symbols that hopefully add meaning in the rituals they are depicted in. Also, I’m definitely an admirer of Sofia Coppola’s work.

AC: There's a very specific piece of Austin geography in here, with the skate park being so close to House Park, that adds a certain local eloquence to the credit scene. Was that always in there, or was that part of the filming itself?

KP: That scene in the credits, filmed at House Park, was actually scripted for the film, along with another scene which ended up being cut in the editing process. I really loved those scenes and thought I’d use one of them during the credits. The circumstances of the scene were written in the script, but the actors improvised their actions and words. It was also convenient for filming that House Park neighbors the skate park. The other deleted scene took place nearby at Thundercloud Subs and was shot the same day.

AC: It can be tough to get a short seen after its festival run: what was the process of getting curated by Omeleto?

KP: One of the lead’s in the film, Isaiah Shepard, who is a Youtuber himself, recommended Omeleto to me and suggested I submit the film to them. They have an open submission online for short films, which is where I submitted. Omeleto is great because they have a large Youtube subscriber base which loves short films.