The Film After the Fire

Richard Linklater talks about giving back to Bastrop this weekend

Richard Linklater on Bernie: "Every time you see a pine tree, that's the Bastrop area." (Photo by Richard Whittaker)

Richard Linklater was hoping to have a nice, quiet private screening of his upcoming film Bernie on Sunday: As he announced yesterday, he and his stars have turned it into a major fundraiser for victims of the Bastrop fires. Linklater said. "That's one thing we know how to do – put on a show."

Bernie, which Linklater called "My Jack Black black comedy," will be released early 2012, so the Sunday screening was originally supposed to be a private event for the cast and crew. However, when the fires started Linklater, producer Ginger Sledge, stars Black and Matthew McConaughey, and sponsors including MPS Cameras and the Intercontinental Stephen F. Austin decided to throw open the doors and make it a charity event. "It seemed obvious. We did a film there, so how could we help?" Linklater said.

A part-time resident of Bastrop himself, Linklater said that Bernie would not have existed without the community: "We were pretty high profile last fall. When Shirley MacLaine, Matthew McConaughey and Jack Black are in your community, it gets people's attention," he said. "We had a scene we shot at the old junior high, but we just had every high school who wanted to could show up. Hundreds turned up for one little scene, just to shoot a scene with Jack."

The distinctive and sadly now flame-licked woods of Bastrop are as much a star of the film as any actor: In fact, they are why Linklater was able to shoot so close to home. He said, "The film is set in East Texas, which is defined by pine trees. So the Bastrop look of the Lost Pines worked perfectly." Without them, the crew would have had to spend more time either near the state line or in Louisiana. "We filmed a little bit there, but every time you see a pine tree, that's the Bastrop area."

Aside from raising funds for the victims of the blaze with the screening, Linklater hopes to see some locals there, and has even set up online sales so donors can buy extra tickets for Bastrop residents. Eventually, he also hopes to have some community screenings of Bernie for his neighbors. "We'll gladly take it out there there for those that want to see it," he said. "This is a film from their community."

Linklater was actually evacuated during the blaze, and was only allowed back on Monday. While he lost buildings on his property, all of his adjoining neighbors lost their houses. With over 1,550 homes destroyed, Linklater said, "In a small community, that's a large percentage homelessness. Everyone I talk to has been affected, and it's a real jolt to someone's life." That made it particularly important to him that the Heart of the Pines Volunteer Fire Department be one one of the event's beneficiaries. "I'm really proud we could help them," he said. "They fought the fires while their own homes burned." Linklater also had particular kind words for how effective FEMA has been in putting a temporary roof over people's heads but, long term, "the goal will always be that people don't just leave the community, that they find a way to stay there and rebuild."

Richard Linklater's Bastrop fire relief screening of Bernie at the Paramount, Sept. 18, 3pm. Tickets $100-$250. Special sponsorship package of $2,500 gets six tickets plus access to a pre-show reception with cast and crew. Tickets on sale now. 100% of all proceeds go to charities including the Friends of the Lost Pines State Parks, Bastrop County Emergency Food Pantry, and the Heart of the Pines Volunteer Fire Department. 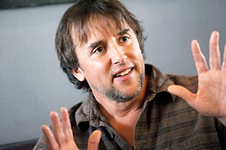 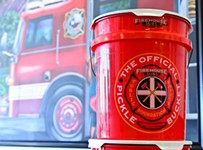 Peter Piper Picked a Peck of Pickled... Firefighting Gear?
Firehouse Subs has a unique plan to save the environment and your house