New condiments for the best flavors in your kitchen

First – because, in our fantasies, we like to be thought of as a source for canny stock market tips – have you noticed how the McCormick spice company’s been acquiring all the best-beloved hot sauces in the last few years?

Srsly: Frank’s Red Hot, the iconic Buffalo Wings heat source? McCormick’s bought that in 2017. Cholula, the restaurant tabletop rival of Tabasco? McC’s grabbed that, too, just last year. It begins to resemble the peppery version of a winning Risk campaign to us, and you might wanna look into buying some McCormick shares while they’re still barely affordable, we’re just saying …

For instance, tahini. It’s that sort of thin but rich paste made from toasted sesame seeds, right? Maybe you’ve tried it; and, if you’ve lived anywhere in the Middle East, you’ve certainly tried it; and, if so, you know how delicious and distinct a flavor the stuff has. Kind of like peanut butter, right, except it’s sesame? And lends itself to mixing with all number of sweet or savory spices? In any place, in any language, we’d say that that directly translates to yum. And tahini is taking a lot of forms in the modern marketplace. Let’s look at a few of them now … 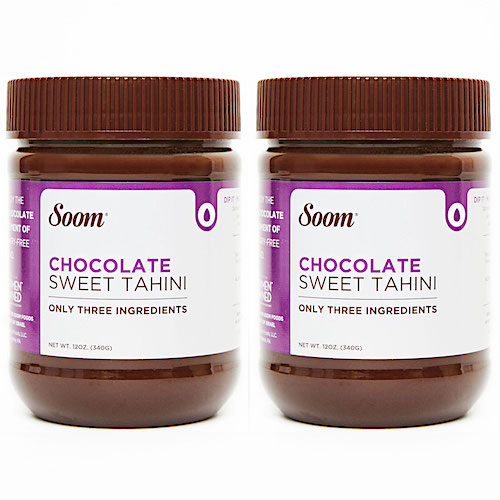 SOOM As a wise man once put it: “You can fuel Soom of the people Soom of the time …” No – we jest, of course. But Amy Zitelman and her sisters up there in Philly aren’t messing around when it comes to tahini: Their premium brand is made from roasted, pressed Ethiopian sesame seeds and nothing else. Soom produces jars of the straight-up, single-sourced origin stuff and (brace yourself) Chocolate Sweet Tahini. (Yes, you can make a sandwich with that choco-spread. Yes, you can also eat it right out of the jar with a big ol’ spoon. Yes, it tastes like Reese’s Cups had better watch their ass, because this Soom stuff is in town and it knows the kind of chocolatey goodness people crave.) And what else, you wonder? Would you believe … date syrup? That’s right: Silan. That’s syrup, as in putting-it-on-your-pancakes-or-waffles-or-ice-cream syrup, that’s made from nothing but steamed and pressed dates. It’s as sweet as you please, oh yes, but has less sugar than honey, agave, or maple syrup – naturally. So maybe what our imaginary wise man (or woman) really said was: If you want some tasty tahini or silan to fuel your day with, you can get it now – and Soom is better than later. 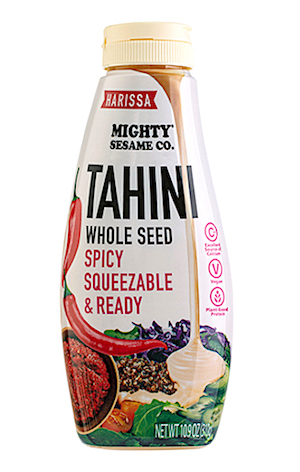 MIGHTY SESAME CO. The folks behind Mighty Sesame Co. want you to put tahini on everything. Well, of course they do – just as the United Poultry Farmers of America would like you to eat chicken for every meal. We’re not going to amplify that idea – the universal application of either tahini or chicken – but we will say that Mighty Sesame’s Harissa Tahini in (nota bene) its convenient squeeze bottle is adding a welcome pizzazz to our salads lately. Especially if there’s some fresh sliced tomatos in the salad, because that flavor combination is *chef’s kiss*. And – we mentioned Buffalo Wings above? Try dipping those wings, next time you have a pile, in some of this Mighty Sesame harissa sauce instead of the usual bleu cheese and see if your taste buds aren’t like, “Whoa – thanks, friend!” Of course, Mighty Sesame offers a plethora of other goodnesses, too, and you know where to click. 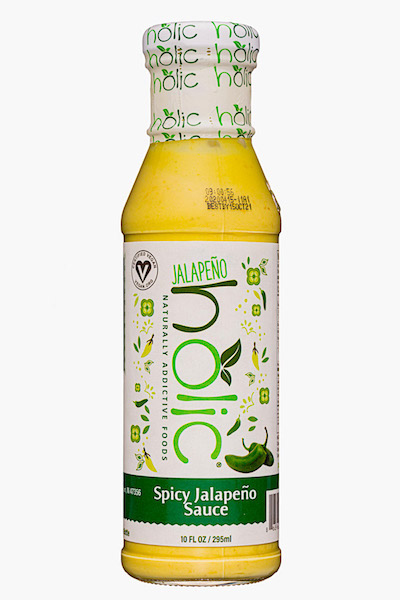 HOLIC You might not think a sauce out of Indiana would be spicy enough for you, but you’d be wrong. Frances and Tonio Torres’ brand of sauces – further stretching the etymology of the wacky “-holic” suffix until it snaps, here, into its own standalone noun – is called Holic, see; and this particular Torres family is based up there in the heart of Hoosier territory; and what they’ve concocted for supercharging your salads and your marinades with is, oh, definitely spicy enough. The superstar (and instigating product) of the Holic team is Jalapeñoholic, and it’s a condiment that’s powerful enough that it wouldn’t seem out of place among, say, this family of heatmongers. Holic has a Honey Aleppo and a (surprise!) Tahini version, too … but it’s this Jalapeñoholic, we reckon, that will be most sought after here in the breakfast-taco-loving ATX. And here’s how you know it’s sufficiently powerful for even the capsaicin-craving daredevils out there: The main fluid vehicle for these Holic sauces is canola oil, right? Yes. But that canola oil is, by volume, the second ingredient. And the first ingredient? Well, if you guessed “jalapeños,” then you’re much smarter than I look. Verdict: Get you some.

Okay, that’s three on the tahini tip. Now, how about a couple condiments that have nothing to do with sesame seeds? 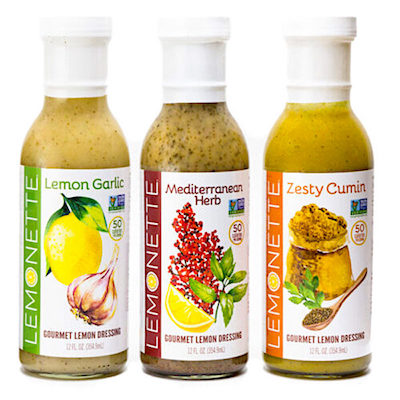 LEMONETTE This is what they call a no-brainer. Because you always see health experts and personal trainers going on about “Don’t drown your healthy salads in that goddam Ranch all the time! Just use lemon juice!” Well, sure, pal; but lemon juice all by itself does not a dressing make. [Note: fight me.] But, Lemonette, this women-owned company out in California, uses lemon juice as just the basis for their dressings … and those dressings are superb. Rather intensely superb, tbh. We’ve tried their Lemon Garlic and their Zesty Cumin, and the flavor was fresh and bright but also nigh on overwhelming. Lemonette doesn’t hold back on the spices, which is laudable, but that makes us (with our possibly mild-ass Yankee culinary habits) think it’s more of a dressing concentrate sort of deal. That makes us suggest this – which we found unmatchable, condimentwise: Mix any Lemonette dressing with some of that ubiquitous Ranch (or with sour cream or yogurt) until its intensity is what your own palate enjoys, and you’ll be glad the bottle lasts longer that way – because you’ll be wanting more as soon as it’s gone. Also, the intense flavor? Makes Lemonette perfect as a marinade for all kinds of meat. We’re looking at you, Zesty Cumin x Tandoori Chicken, and we’re already drooling in anticipation. 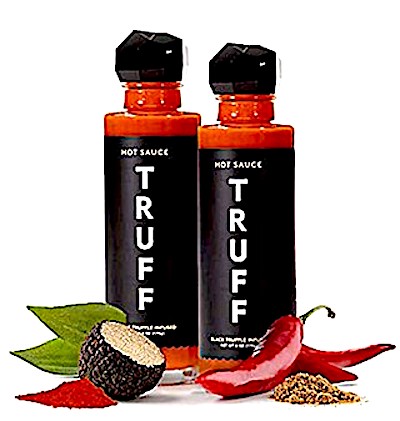 TRUFF Yeah, don’t get us started. In the world of foodie hipster cred, as if that were a thing for anyone who’s other than pathetic, we were in on the proverbial ground floor with this one, this truffle-infused hot sauce with the fancy almost-like-a-perfume-bottle packaging. Look, we blogged about it here, a while ago, okay? And now of course Truff has, like, exploded across the national and international marketplace, and even added a pasta sauce variation to their line, and yadda-yadda-yadda. Thing is, this shit is goooooooood. And you wouldn’t not like something just because it’s so popular, right? Like, water is popular, but that doesn’t stop you from, you know, drinking it – right? So we wouldn’t feel legit if we left Truff off any list of “Tastiest Sauces and Dressings and Marinades” that we’re bringing your attention to right now.

No, really, so many of these products are muy delicioso …