Another week with no freeze! 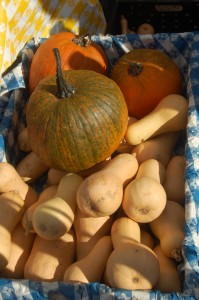 Butternuts and Pumpkins at the Sunset Valley Markets
Unsettling as it is to say, we have reached the first of December without having a freeze, at least in the vicinity of Austin. (My basil is still looking just fine.)

But it simply can’t go on much longer, so if you haven’t stocked up on nightshades (tomatoes, peppers, hot peppers, and eggplants) this weekend is the time. I mean, I think! There still isn’t a freeze in the 8-day forecast – we could get one more pre-freeze market, but I wouldn’t count on it.

Cucumbers are pretty much over, though, except for the greenhouse English ones, which can be found at Flint Rock Farm’s stand at Sunset Valley.

But what do we have plenty of? Greens, greens, greens! Especially the really good ones, like turnip greens and Swiss chard and spinach and kale. And they are all still young and tender; over the summer I really start to pine for greens, and now they are all available just about everywhere. Another item everyone’s got in spades is cilantro. It’s cheaper and leafier at the farmers market than it ever is in the grocery stores; right now is the perfect time to make your own salsa! It is that magic time of year that only happens in the late fall and the late spring, when tomatoes, peppers, onions, and cilantro can all be purchased (or harvested from the home garden) at the same time. I have made two batches so far from my garden’s late cherry tomatoes and poblanos, and I recommend you do the same. The board from K & S Seafood last week

It’s also cool enough for oysters!! (I know October and September have “R”s in them, but I think it is wiser to wait until it is actually cool outside before buying Gulf oysters.) K & S Seafood has, not only pints of shelled oysters that are mind-blowingly fresh, but you may also order oysters in their shells for pick-up the following week. I have been consuming so much poultry lately, between two Thanksgiving turkey dinners, a whole chicken, and the soups made from their remains, that I am really feeling like splurging at the K & S stand. I might even buy oysters and fish. (K & S is at Barton Creek and Cedar Park Markets)

In case you haven’t heard the Headline-Worthy news that Pate Letelier has made it onto my grocery list, I really love their pates (a few of which are vegetarian; I highly recommend the mushroom pate, it is divine). In any case, I noticed last week that they are also selling White Wine Jelly (with Citrus) and Red Wine Jelly (with Currants) (both $6). I have only read about wine jelly in books (it is a very 19th Century item) but it does sound like a real holiday treat, very European. If it is anything like their pates, it is going to be fabulous. I shall update you, for I intend to pick some up this weekend! 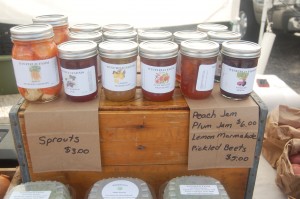 Lemon Marmalade sounds VERY intriguing...
Speaking of jellies, Winfield Farm has got some lovely varieties: Peach jam, plum jam, and lemon marmalade (as well as pickled beets and spicy pickled carrots). Plum jam is probably the best jam in the world, when it’s made from sour Texas red plums. There’s nothing like a jar of jam for a hostess gift, going into this season of parties! Oh that reminds me, Confituras will have their Tipsy Cranberry Pecan Sauce again this Saturday (they sold out for a while there) as well as their cranberry cinnamon jam, pear jam with sage and honey, and one of their hugest bestsellers: Suenos marmalade (it’s made with tangerines). I think that name means "dream marmalade". Bounty from Hairston Creek Farm at the Downtown SFC Market

Dai Due News: This Sunday they will be able to serve hot food at the Mueller Market on Sunday as well as at the Downtown SFC Market on Saturday. This week's menu:

In abundance: greens of all types, squash both winter and summer, potatoes and onions, and let's not forget: pecans! Also carrots, radishes, broccoli, cauliflower, cabbages, tangerines, and possibly grapefruits. Cilantro and parsley.

Held over from summer: tomatoes, peppers, eggplants and basil. Also okra, though it is getting scarce. There may be a few persimmons left, and possibly Caeda Farms might have a few late figs.