Sunshine (State) on My Shoulder, Part 1

A deeper look at the work of Florida's ragtag art collective, The Highwaymen.

Recently, I immersed in a few coffeetable books covering subjects relating to my home state, Florida. In the intro of the review, I said, "In the post-Postmodern re-embrace of Modernism, few rearview mirrors serve as well as Florida. As 'back to the future' glimpses into the past's vision of today and beyond, the cultural movements of the Sunshine State cast a curious glow, reflecting post-war hopes and dreams of many who flocked there throughout her various land booms."

Aspects of a 'Florida aesthetic,' if you will, have had a great influence on design – interior, architectural, visceral. What's always fascinated me about Florida is its utter sense of self. It is a state self-possessed the way Texas is self-possessed, very conscious of its own image and place in the scheme of the world. Now, while Florida may not be quite as enamored and deluded as the Lone Star State (You won't see half as many businesses, for example, bearing the shape of the state or the image of the state flag in their logos…), its hubris is honed enough to know to keep a keen eye on what is reflected back and adjust accordingly. In the past two decades, the state (and its official entities, government and educational) has become much more invested in the parts of Florida culture that were disappearing in the glut of progress and the decimation of development. These books, published by University Press of Florida demonstrate some appreciation for preserving and protecting even some of the state's kitschier elements.

Throughout the holiday season, I hope you'll indulge me as I post to Chronique some of my notes, thoughts, research, and feelings related to these and other issues that these books instigated. (Plus, these books, if not great holiday gifts in and of themselves, might also spark some fun holiday ideas for y'all, too.)

This first bloggity is about the two books from UPF I reviewed related to the outsider art group, The Highwaymen.

"Who are you to write a book about the Highwaymen?" the unidentified caller asked. The phone call came out of the blue early one morning as photographer-turned-author Gary Monroe was gathering research for his treatise on this ragtag alliance of mid-20th-century, African-American artists known for producing archetypal electricolor dreamscapes with oil on Upson board, unwittingly adding definition to an already established Florida mythology. Lilting palms, Spanish moss, rumbling thunderheads, raging surf, lonely roads – these are all elements contributing to the lore of primeval Florida, and all subjects of these artists' work.

So-called for their spontaneous sales routes informally set up along the highways and byways of burgeoning boomtown Florida, the Highwaymen became known, beloved, even, across the Sunshine State (especially on the East Coast, between Daytona Beach and Fort Lauderdale), selling their evocative scenics for $10-35 a pop out of the trunks of their cars to bankers, real estate agents, interior designers, and mostly middle class and blue collar types wishing to decorate their homes and offices in accordance with their perceived exotic surroundings. The roughly defined 'group' was named posthumously, some 20 years after the fact, by aficionados rediscovering the art in attics and thrift stores across the state.

In his first book, Highwaymen, Florida's African-American Landscape Painters, Monroe not only provides a healthy and myth-busting bio for the hard-to-trace art movement, but also lays out his thesis : that the value of their work is not so much in the strength of technique or lofty art precepts – although some mastered their craft and became important artists in their own right – but in their unique and often slapdash interpretations of their environs and in their passion to use art as a means to escape the limits of black American life in the 1950s-80s South. (A story in and of itself worthy of further research, as all of the principals in this book attest that despite the time, they operated without the fears that hindsight might assume of black artists traveling the highways and making a living from white culture in the very racist deep South.)

The story of artist Alfred Hair – the beating heart of the group, the propulsive ringleader, who encouraged his friends and peers to join him in slapping out a living on canvas – emerges as the main character, a metaphor of sorts, in this first volume. The loosely knit group of friends had no mission, no political agenda other than to make a dignified living. Charismatic Hair's ultimate goal was to be a millionaire before the age of 35 and to acquire a brand new Cadillac long before then. He learned at the brush of popular Florida scenic painter A.E. "Beanie" Backus, who became a mentor to not only Hair, but through Hair's enthusiasm and ability to cheerlead and rally the troops, as it were, the entire clan of outsider artists. Hair studied Backus's work but developed his own speedy technique that allowed him to pump out dozens of paintings in a day. His goal was efficiency, to become a self-styled conveyor belt of product. Unbeknownst to him, with his style, with his slash and churn stokes, came an inadvertent new art.

In the same way that noted and similarly underappreciated Floridian son Harry Crews "longed and lusted for an unlimited supply of books" in his quest to teach himself how to write, the Highwaymen, this odd mix of South Florida artists clamored for found supplies and mentors to teach themselves how to paint and, more to the point, how to make a living selling their paintings.

Monroe's narrative is the foundational first 26 pages of the book, broken into subheadings, for the most part, chronological, detailing the sketchy history of what became a viable Florida art movement despite all odds and itself.

If Hair was the group's heart, the subject of Monroe's second book, Harold Newton, The Original Highwayman, was its soul. Heralded as the finest artist of the group, Newton was admired by peers, customers, and mentors alike. His story is pieced together by Monroe with the help of Newton's loved ones and friends, who sometimes differ on their takes on history.

Monroe's writings are engaging and informative, but the real treat lies in the body of each book, the vividly reproduced plates, which make up the bulk of the invigorating coffee table tomes. "Other-worldly" and "unearthly" are qualities often ascribed to Florida landscapes, especially the skies and how the light plays against vivid verdant backdrops. Shown here en masse, these temporal landscapes are but blinks of an eye, flashes of impossible color, capturing the fleeting nature of nature in the southern peninsula.

Monroe's final installment of the Highwaymen trilogy will be interviews with Highwayman Al Black and plates of his later work: prison murals he painted as an inmate. Al is due out in 2008, and the book before then.

Check Chronique in the next day or so for Part 2 of this series, an examination hopefully answering the question posed at the top of this review: Why author/photographer/art professor Gary Monroe was a natural pick to author this project. 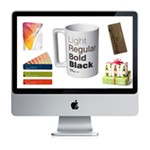