Avant Glam Into the Future 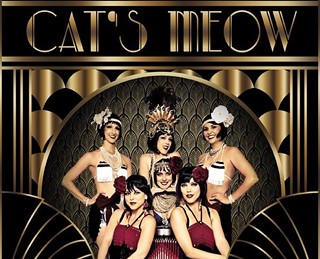 Sassy Delure (center) on the debut show from Austin's newest burlesque troupe, Avant Glam Cabaret: "The whole thing is going to relate to the vintage age of burlesque."

When burlesque siren Sassy Delure put out the call that she was putting a new troupe together, she knew they'd grab their sequins and come a'runnin to form Avant Glam Cabaret. But it wasn't a sudden urge that made Delure want to get the gang together for the first time.

This weekend, Delure and her fellow minx Roxie Moxie are teaming up with their third twin Frannie Brown, plus Miss Lady Luck, Lilly LaFleur, and Serese Brown, for the new troupe's first exposure to the Austin crowd. This isn't just a case of 'bring what ya got and show 'em what yer mama gave ya.' Delure said, "The whole thing is going to relate to the vintage age of burlesque. It's pretty much split between smoking hot dance numbers, vintage burlesque and belly dance."

Her idea is to produce a show that felt really cohesive as an idea: More of a single creation than the glorious patchwork of vaudeville. Delure called it "the most thorough show we have put together." She choreographed all the group numbers and multi-dance routines, while all the solos have been workshopped within the group. The music, the sets and the costumes have all been designed with a singular aesthetic in mind, and there will even be a pre-recorded host, she said, "so they will weave together through the show."

She and Roxie Moxie had been working on the idea for their own troupe for quite a while, but there were a couple of delays. Firstly Delure has added another member to her cheering section: A little over three months ago, she became a mother, and pregnancy can put a little bit of a cramp on the shimmying and shaking. However, it gave them a little more time to really think through what they wanted the show to be, and they quickly realized that "in order to do that, we realized that we had to put a group together that we could work with regularly."

But the other challenge was finding the right venue. She and Moxie used to hold their Lowbrow at the Highball nights at the old Highball. She said, "The Highball recognized that burlesque was a great addition to their itinerary," but with that bar closed and relocating as part of the Lamar Plaza renovations, they had to look for a new home. That's not as easy as it sounds, but finally they settled on the velvet curtains and Weimar charm of the Spiderhouse Ballroom. Delure said "Spiderhouse is really cool. Since I came to town, they've done some revamping of the place, and it caters to cabaret more so than it did." But for Delure, who sees a variety explosion in Austin, it's frustrating to see a lack of stages open. "There are not enough venues for cabaret," she said. "Cabaret and burlesque in Austin, because it doesn't get a lot of press, it's still underground, and so there's a lot of venues that are missing out."

Before moving to Austin, Delure was star of the Seattle burlesque scene, which has really been one of the cutting edge capitals of the bump and grind revival. By comparison, for years Austin was seen as the stage-shy ingenue, but that's changing. There are multiple troupes, as well as award-winning performers and regular shows. "The Austin scene is growing, and it's a really healthy thing for everyone to be pushing the envelope," said Delure.

Just as importantly, national-level performers like Miss Indigo Blue and Catherine D'Lish are making stops here on their tour itinerary. According to Delure, that is not just a sign that Austin is a real burlesque town, but it also drives the local scene to more daring acts. "Everyone wants to creatively be in a place where the bigger performers want to come to perform," she said. The creativity is there, the drive is there, and now all that's really needed is the right stages. Then, she said, "We'll be able to catch up with the bigger cities." 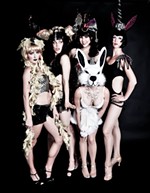