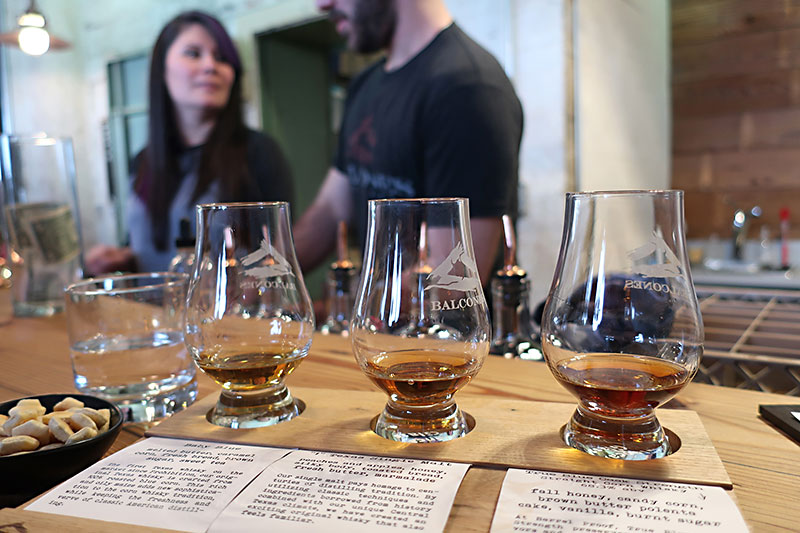 Balcones Distilling in Waco has a tasting room that could double as a neighborhood bar. The small space in the corner of the massive distillery is cozy and noisy with room for about 50 patrons, but the imbibers cycle through the room fairly quickly.

The tastings are a lot of fun. Part of the entertainment is listening to your neighbors describe their opinions of the Texas-made whiskey while forming your own descriptions. The flight of three glasses of the distillery's products is just enough to capture the essences of the spirits without getting tipsy. The tasting room barkeeps will also handcraft a signature cocktail or pour a full shot using their products. The weekly flights rotate between the distillery's 13 labels and special releases. A typical trio includes Baby Blue, the distillery's original corn whiskey first released in 2009 and the first Waco-made whiskey* since Prohibition; Texas Single Malt, a Scotch-style whiskey that is the standout among the three; and True Blue Cask, a mature version of Baby Blue with a higher alcohol content.

What added to my experience was the tasting room staff's passion for the product. They added a sample of Rumble, Balcones' unique take on rum, just for the fun of it. The Waco distillery was founded by Chip Tate, who lost the business to investors in 2014. After an acrimonious split, he's working to open Tate & Company Distillery in the coming year.

Editor's note: This story originally stated that Balcones Distilling produces "the first Texas-made whiskey since Prohibition." In fact, Hye's Garrison Brothers Distillery owns that distinction, and has the trademark – “Texas First and Oldest Legal Whiskey Distillery" – to prove it. The Chronicle regrets the error.

1,382nd in a series. Follow “Day Trips & Beyond,” a travel blog, at austinchronicle.com/daily/travel.