Andrew Porter talks about his debut novel, 'In Between Days,' and his mysterious creative process 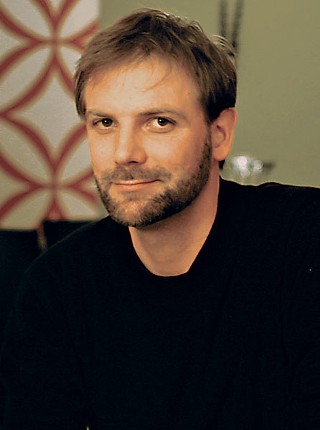 Andrew Porter does not write about himself. And, given that his latest book includes a scummy slew of academics and torn-up alkies engaged in upper middle-class angst, this must be very reassuring news to his family and co-workers.

His debut novel In Between Days (Knopf) is deep, dark stuff, a striking assemblage of generational disintegration and distress. It takes its title from an uncharacteristically upbeat Cure song and deals with a midlife crisis amid the inherent entropy of the modern family unit. Porter, who directs the creative writing program at San Antonio's Trinity University, claims to identify with none of the characters detailed within; in fact, he says that everything that happens to these messed up people came as a total surprise to him.

And Porter likes it that way: "I always talk to my students about Flannery O'Connor's belief that writing should be an 'act of discovery,' something she writes about at length in her book Mystery and Manners," he explains. "I tell them how O'Connor herself never actually knew where her stories were going as she was writing them, how she simply started them with a single sentence – usually a sentence that introduced a character, or characters – and then just allowed her characters to determine where the story was going."

The author, whose short stories often owe more to Wild Strawberries than to Raymond Carver, started out as an aspiring filmmaker, and the real mystery is perhaps how a guy so smitten with cinema switched to writing. "When I first encountered film," he says, "I think what I loved about it most was the fact that you could incorporate all of these different art forms into a single story. You had visual imagery in the cinematography, language in the dialogue, music in the score or soundtrack, and so forth." Film seemed to Porter like a perfect combination of all of the forms of artistic impression he'd loved growing up.

"The only reason I ultimately decided to abandon film was that filmmaking is such a collaborative process, and I've always enjoyed the creative process much more when I've been able to work on my own," he says.

It was, judging by the critical reception his short stories have received, the right move; he won the Flannery O'Connor Award for his debut collection The Theory of Light and Matter. So, does he have any concerns about making the switch to novel writing?

"There were definitely a lot of new challenges," says Porter, whose novel charts the eroding relationships of a failed architect, a New Age-y divorcée, a reluctant writer, and an expelled coed. "I've always thought of a short story as kind of a brief glimpse into a single character's life, and so the plots of my stories have never been particularly elaborate – or at least, I find myself thinking much more about the characters in my stories than I do about the plot. With a novel," Porter notes with the calm of an artist ever embracing the unknown, "you don't have that type of luxury."

What hasn't changed for the author? His thrill at the spooky aspect of storytelling: Flannery O'Connor's "act of discovery" or, in Porter's own words, "that feeling of wonder when you see a person, see what they look like, and don't know how they got here, what brought them before you. That mystery that just happens organically when you try to tell a story."

Andrew Porter will read and sign copies of In Between Days on Monday, Sept. 10, 7pm, at BookPeople, 603 N. Lamar.