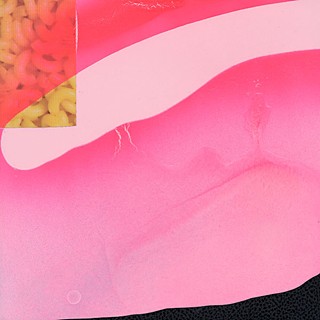 Untitled from Taboo Pleasures and Potent Desires by Tsz Kam

"Up + Up" showcases work from a number of artists that are visually punching above their weight, but the show is surprisingly tame for a student exhibition. A well-behaved formalism seems to be valued by the graduating class (or is it their instructors?) above conceptual concerns and risk. The vast majority of the work appears more concerned with visual appeal than exploration of concept, and the show is organized with the most immediately eye-catching works close to the entrance of the gallery and works that are less successful in this regard tucked away in the back. Using these works as a guide, one can guess at the attitudes of the department toward conceptually geared art, which is found packed in among the less-than-perfect formalist pieces. There's a whiff of the historical Academic Hierarchy of Genres ranking system in the air at the VAC.

Up front, polished formal works take center stage, works like: Tsz Kam's Taboo Pleasures and Potent Desires, a series of small abstract paintings in neon pink, dusty periwinkle, and black rising up in a tall oval configuration above a fluorescent light positioned on the floor; Ryan Robbins' Interdependence II, a large work on creased Yupo which first reads as a delicately shaded painting or deftly rendered work in graphite, but on closer inspection reveals itself as simply catching the light differently on its slightly re-angled facets, then reveals a white drawing shining through those distractions; Cameron Coffman's ELL, a welded steel and laminated wood construct toying with the ideas of balance in much the same way as Arlene Shechet's abstract ceramics (currently on view at Lora Reynolds Gallery); and Kate Wilson's Icarus, a low-relief glossy wall sculpture whose own shadow plays an important compositional role.

The professionalism and craft of these works is impressive given the artists' young careers, but I'm almost more moved by their peers, few though they may be, who tried to tackle something less conceptually light. That takes bravery given the value structure suggested by the exhibition: form valued well above content. These works, which look to have been pushed deeper into the gallery by their more buttoned-up counterparts, accompany a second string of art again concerned chiefly with formal considerations. Conceptual works are refreshing in this show regardless of their level of success: Carina Guevara's Ya Me Canse, a series of repeated text and images bearing a sense of rebellion, resistance, fatigue, and faltering memory; Amber Scanio's Sister series, a pair of photographs dealing with self-image, dress-up, and the sexualization of youth; and Mehregan Pezeshki's video performance Hijab, which addresses in a somewhat violent fashion the subject of its title.

The most compelling works, however, straddle the fence that the rest of the exhibition creates. I've been thinking about Vanessa Ayala's Christine ever since I left the gallery. This simple washed-out portrait implements the attractive formal qualities of the works from the vaulted portion of the gallery while still offering something to chew on: memory, intimacy, and the mechanics of mental projection to fill in missing information. Sofia Maria Proffit's Defacement, a noir experimental monoprint, addresses the same through a darker, more cinematic lens. Even Cody Bubenik's simple lithograph Printed Machine brings up interesting concerns with technology and history without sacrificing visual draw to those ends.

For a student show, this one is peculiar. One would expect overly bold, in-your-face works from a graduating class – the sort of rebellious, shocking attitudes that mellow out a few years after school. The class of 2015 does not have that stereotypical problem, but they may well have one on the opposite end of the polite-confrontational spectrum.