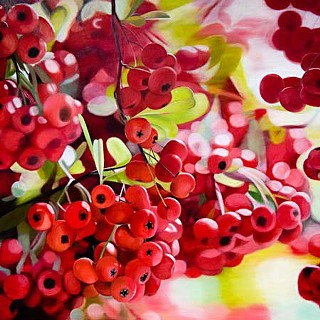 What's alive? A plant, a person. A city, a system. A thing that changes to display, over time, reactions to the other living things in the world around it.

Observe what's alive, snap a photo with your mind's sharpest Hasselblad, and transfer that image via precise brushes and well-orchestrated pigments to a surface of two lucky dimensions. They're very lucky, those dimensions, if the artists doing the painting are the ones featured at Davis Gallery's current exhibition, because those artists are Stella Alesi, Miranda Gray, and David Leonard.

Alesi's new works expand her past mastery of living flora and bring, in canvas after canvas, a splendor of photo-real foliage most often heralded by a profusion of fiery pyracantha berries (although the sweet green of occasional loquats serves to cool that incarnadine blaze). A diversity of sizes makes up this latest Alesi selection, each painting seeming a vibrant square carved directly from the air in which the artist experienced it. 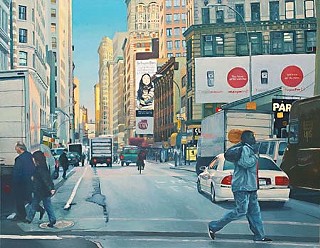 'All the Time' by David Leonard

Leonard's large scenes eschew the arboreal completely, his deft brush instead capturing the human-built magnificence and constrained chaos of the modern city. New York, Austin, and ... is that San Francisco? The metropolitan densities, the peopled and vehicled hub-urbs captured with their guards down, their ineluctable structures rising to occlude an ever-shrinking sky. What pyracantha could hope to contest the argument of a traffic light whose most urgent red can nonetheless never halt the growth of the concrete (and steel and glass) jungle that surrounds it?

Gray's an atomy compared to the bigness of her co-exhibitors, working in tricky egg tempera to create images no less realistic yet consistently much smaller – tinier than this tabloid page – and sometimes arranged with a personal, cryptic purpose in mind. Even her straightforward portraits of people or their pets, her depictions of objects tangential to them, are framed by meticulously rendered patterns of ornamental intricacy. And when those human portraits have their heads replaced (as they do in several depictions) by a set of crafting tools or a cactus or an array of graphic novels, what are we to think? We might think – noting that the foremost of the graphic novels in the portrait called Fractal is Brian K. Vaughan and artist Pia Guerra's Y: The Last Man – about what it means to be the last man alive and about what it means to be alive at all, among the living, among those creatures fortunate enough to spend time in this ceaseless world and in a venue that holds such two-dimensional delights as the Davis Gallery does right now.