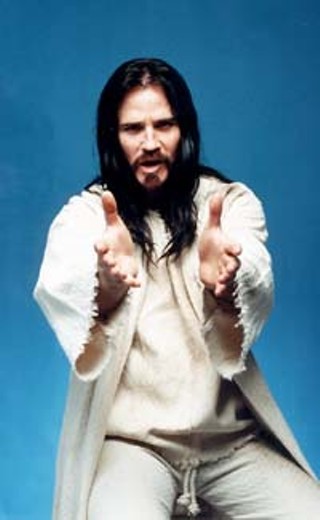 The front curtain shimmers; jagged laser lights and a guitar solo suggest the opening of a Metallica concert. And really, that's not far off, because Austin Musical Theatre's version of Jesus Christ Superstar, as directed by Scott Thompson, owes much to our beloved 1980s, including a Judas who looks (and sings) like he just stepped out of an MTV hair band video.

And when it's not 1983, it's all over the place: 1970s America (natch), but also 1700s France (Herod's scene), 1940s Germany (Pilate's scene), and everything in between. From our decade, there are even slinky S&M devil-dancers. It's a veritable survey of our soon-to-close millennium set to rockin' renditions of Andrew Lloyd Webber's score. The set is done up in scaffolding and tiles and intended to look something like an archeological site, though it tends to resemble more closely a cross between a cluttered rock concert stage and a busy Jerusalem street.

Mona Caywood, who plays Mary Magdalene, has a voice that is consistently elegant. Her warm, blues-singer aesthetic makes her an imposing and womanly presence. James Beeks is terrific as Simon, and he rocks down the song "Simon Zealotes." (Never was the ellipsis held longer in: "You got the power ... man.") But the most compelling characters here are the most evil. Oscar Wilde used to say, "Wickedness is the term virtuous people use for the curious attractiveness of others," and in this case, wickedness and attractiveness do indeed go hand in hand. All the priests, but particularly Caiaphas -- the established Richard Kinsey -- and Annas -- the up-and-coming Jessie Galvan -- are deliciously menacing. Greg Holt's Pontius Pilate oozes charisma and sympathy (which is a little twisted because it makes him seem like a warm and fuzzy fascist). And the Roman soldiers are just way hot.

The main characters on the other hand ... Judas (Danny Zolli) feels really, really bad about having Jesus killed. Really bad. But in the whole Eighties camouflage/chains regalia, this Judas' confusion has about the same emotional impact as Axl Rose searching for misplaced drugs. Hitting the high notes seems more on his mind than the Son of God's imminent death. And, except for the beautifully staged crucifixion scene, Sean McDermott's Jesus is about as docile and unstarlike as one can get. Jesus' "Get out!" in the Temple is an annoyed whine more than a dramatic call to reform.

But the shrill moments are, oddly, to the show's credit. In this day and age, Jesus Christ Superstar's novelty chips are long-since cashed in. What remains is the camp factor, and this production has that going on in spades. With lyrics such as "I always thought that I'd be an a-post-le ... " or Jesus' understated lament in the Garden of Gethsemane: "Then I was inspired; now I'm sad and tired," it's hard not to get caught up in the outrageous cheekiness of the Bible-as-musical. (Think Mel Brooks' brilliant "Springtime for Hitler" number in The Producers.) And it's hard to deny -- the songs are catchy. Just try to keep "What's the Buzz" from getting stuck in your head. After all, when you get 50 people of all ages in tie-dye onstage waving palm leaves and singing "Hosanna" at the top of their lungs, it can't be good, exactly. But it can be at once awful and great. And it is both.