Other Worlds Boards the Flight of the Navigator 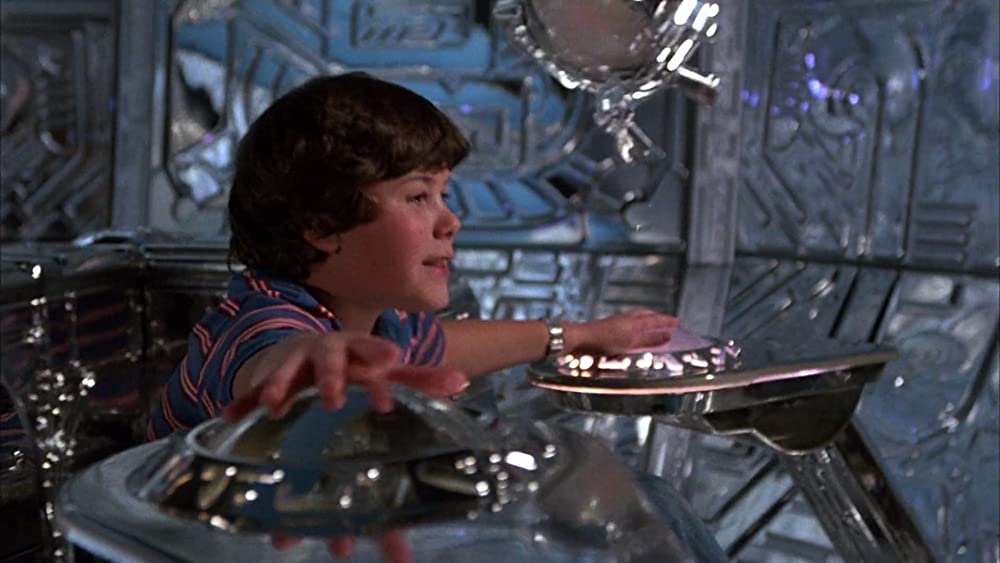 Flight of the Navigator: Director Randal Kleiser will be this year's recipient of the Other Worlds Film Festival's Defender of the Universe award

Other Worlds Film Festival, Austin's celebration of science fiction cinema and bleeding edge horror, breaks back into reality tomorrow with its return to the Galaxy Highland, and the special announcement that beloved 1980s kids' space romp Flight of the Navigator will be this year's Defender of the Universe screening.

The year the honor goes to director Randal Kleiser who followed up his box office successes of Grease and The Blue Lagoon with the story of a young boy (Joey Cramer) who experiences an interstellar adventure with an aline ship (its robotic commander voiced by Paul Rueubens, with whom Kleiser would g on to make Big Top Pee Wee two years later).

A moderate success at the time, it's gone on to become an adored cult throwback, with multiple rumored remakes attempted. It's also still regarded as groundbreaking in the film industry as one of the first films to make heavy use of CGI effects. Kleiser has continued to pioneer filmmaking technology, and is now working heavily in VR and AR, having won a Lumiere award from the Advanced Imaging Society for his Augmented Reality take on "You're the One that I Want" from Grease.

Other Worlds creative director Bears Rebecca Fonté explained that, after the last 20 months of lockdown and fear, it was time for "something fun and uplifting." The team started looking for films celebrating anniversaries, and with Flight of the Navigator now 35 years old, it seemed a natural fit. Fonté said, "I have such a vivid memory of seeing it in the movie theatre, and I think I may have been the same age as the kid in the movie."

For more about this year's festival (running Dec. 2-5 in person and 6-12 online), pick up this week's issue (plus you can read about the first round of films here). Now here's the final list of movies added to the 2021 lineup:

DEFENDER OF THE UNIVERSE SCREENING

Flight of the Navigator
D: Randal Kleiser
Knocked out in the forest near his home, twelve-year-old David awakens to find his family has moved and eight years have passed. Perplexed that he hasn’t aged, David’s family brings him for testing, only to catch the attention of NASA, who have their own seemingly unrelated mystery to deal with, a floating driverless space pod.

Sight Extended
D: Daniel Lazo, Eran May-Raz
In a future dominated by augmented-reality eyepieces, an agoraphobic young man experiences an unlikely transformation when he comes across a mysterious app that gamifies every facet of his life (US, World Premiere)

Dark Cloud
D: Jay Ness
In the aftermath of a horrific accident, Chloe volunteers to try a new rehabilitation process, using artificial intelligence. The smart-house-system, known as AIDA, will do anything to keep Chloe safe. After all, this is her new home… (US, North American Premiere)

Residents of Arcadia
D: Dom Cutrupi
Two social media influencers and entrepreneurs have their perfect lives disrupted when a man breaks into their backyard. As a mysterious countdown appears on screens and mirrors throughout their home, the ideal couple struggles to maintain their ideal life (Canada, US Premiere)

The Alternate
D: Alrik Bursell
Struggling fimmaker Jake investigates a glitch in his footage, only to find a portal to a parallel dimension, one in which he has the fame, fortune and family he has always wanted (US, Texas Premiere).

Boy #5
D: Eric Steele
A social worker whose last charge committed suicide takes a withdrawn homeless boy into her care, not suspecting that he is a vampire (UK, North American Premiere)

Esluna: The Crown of Babylon
D: Denver Jackson
After her mentor is abducted by a renegade monk, a relic hunter and her crew must find the Crown of Babylon, an ancient artifact rumored to have the power to bring back the dead (Canada, Texas Premiere).

Homebody: The Haunt of Guy Withers
D: Zachary Endres
When Guy retreats into the apartment he runs as a shared short-term rental, he finds himself at the mercy of a world that doesn't even notice he is gone, and haunted by the prospect of what lies past his door (US, World Premiere).

Keeping Company
D: Josh Wallace
A fateful chain of events begins to unravel after two brash insurance salesmen go knocking on the wrong door, only to find themselves selling to a serial killer (US, Texas Premiere).

Minor Premise
D: Eric Schultz
Attempting to surpass his father's legacy, a reclusive neuroscientist runs a risky experiment on himself. Only able to remember a fraction of each hour, Ethan locks himself in his home with his ex-girlfriend asking her to dive headfirst into the uncharted equations of his brain (2020 Reprise screening).

Nova
D: Dana Cowden
On a mission to establish an outpost on Mars, Android Officer Nova finds herself caught between her human crew-mates and her own kind in the wake of erupting onboard android mutiny (US, World Premiere).

Red Snow
D: Sean Nichols Lynch
A struggling romance novelist who has read the Twilight series a few too many times discovers a vampire hiding in her Lake Tahoe garage. As he heals, he agrees to help her with her own vamp-lit novel, at least until his vampire friends show up and ruin their meet-cute (US, Texas Premiere).

Tune into the Future
D: Eric Schockmel
One hundred years before the internet, a self-declared tech guru preached the future to a flock of outsiders, predicting Skype, jetpacks, space mining and drones. Despite his 80 patents and friendship with Edison and Tesla, Hugo Gernsback is barely even remembered for his most important invention, Science Fiction (Luxembourg, Texas Premiere).

Turn of the Screw
D: Alex Galvin
Julia -- a last minute replacement for another actress -- arrives the night before open and is thrust immediately onstage to act the lead role in an evening of terror. Cast as the governess in a stage adaptation of Henry James’ Turn of the Screw, Julia, just like her character, begins to suspect that not just the fictitious house is haunted, but also the stage where she stands (New Zealand, Texas Premiere).

Ultrasound
D: Rob Schroeder
After a strange sexual encounter, Glen and Cyndi become unwitting test subjects in a mind control experiment. They search for answers as their own memories become tools for manipulation. Based on the graphic novel Generous Bosom by Conor Stechschulte (US, Texas Premiere).

Other Worlds, Other Worlds 2021, Online Film Festival, Defender of the Universe