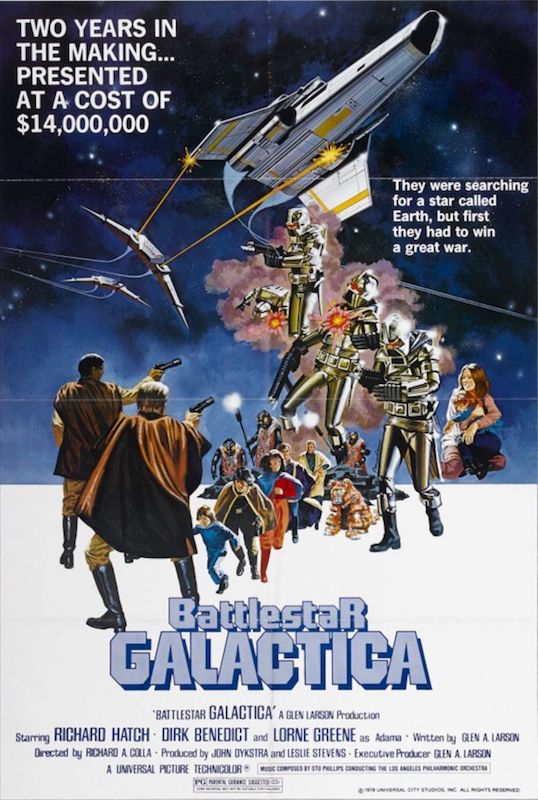 Forget the reboot: the original 1978 Battlestar Galactica rewrote the rules for epic TV science fiction. Now Alan Levi, the uncredited show's director of the pilot and many other classic TV shows, will be this year’s recipient of the Other Worlds Austin SciFi Film Festival's Defender of the Universe award.

For most American audiences, the pilot episode of Battlestar Galactica, titled “Saga of a Star World,” lived in grainy 525 line broadcast TV. But the massively ambitious show was so expensive that the producers recut it in widescreen, and released it theatrically internationally. But while Richard Colla was credited as director, he’d fallen out with the producers, and was replaced by Levi, who finished the shoot, and then directed the next big two-parter, "The Gun on Ice Planet Zero."

Levi will be the third recipient of the festival's Defender of the Universe award, joining legendary genre actress Sybil Danning, and The Black Hole director Gary Nelson. As part of the celebration of Levi’s legacy, the festival will show one of the first theatrical screenings of the feature version of the pilot in four decades. OWA founder and artistic director Bears Rebecca Fonté described those episodes as “some of the best sci-fi television ever made," adding that the show “grabbed [the] zeitgeist of the late seventies and bottled it for the small screen, but it was always more than a television show, as the original theatrical cut of the pilot proves.” With this screening and the award, Fonté said, "I am excited to talk with [Levi] about his career.”

And it’s quite a career. Levi directed or produced over 350 hours of prime time TV, including (deep breath) Gemini Man, Lois & Clark: The New Adventures of Superman, The Bionic Woman, The Six Million Dollar Man, The Incredible Hulk, Buffy the Vampie Slayer, Tales of the Gold Monkey, Quantum Leap, and Misfits of Science.

But Levi’s award is not the only announcement today. OWA has unveiled two titles for the festival, starting with the world premiere of Artist Depiction, celebrating a very different legacy – that of the NASA concept artists who created the visuals to explain space to the eager public. It's a return to the festival for director Brett Ryan Bonowicz, who explored the impact of futurist Arthur Radebaugh in 2017's Closer Than We Think, and this time he used new scans of rarely-seen art in the NASA Ames Research Center to show how art represented science.

Also joining the roster is the North American premiere of Precognition, a dark future tech story where an app is given far too much power in people’s lives. Fonté, who signed it up after its world premiere at SciFi London, called it “the sort of sweeping scifi world-building that gets me excited. … We find a future created by ‘advances’ toward a utopia, which should always be suspect.”

Other Worlds Austin runs Dec. 6-9 at Flix Brewhouse. Info and tickets at www.otherworldsaustin.com.