It's Gonna Get Pitch Black at Other Worlds

David Twohy named this year's Defender of the Universe 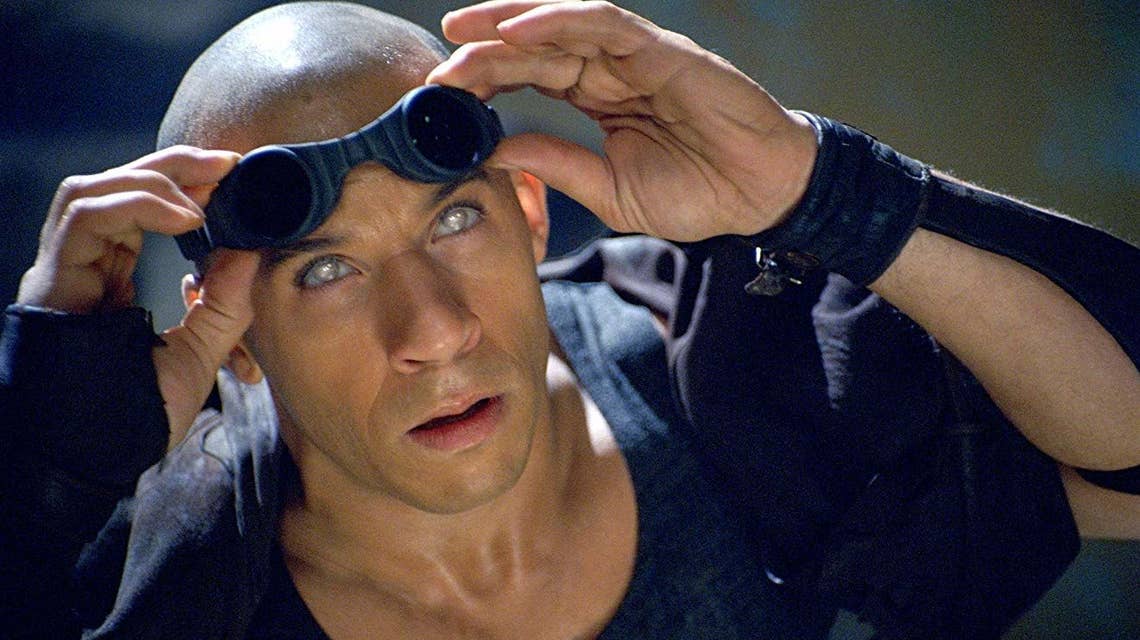 Vin Diesel as intergalactic killer and unlikely antihero Riddick. Writer/director David Twohy, who created and oversaw the character's adventures over three movies and promises a fourth, is this year's inductee into the Other Worlds Film Festival's ranks of the Defenders of the Universe.

The filmmaker will be inducted as part a special 20th anniversary celebration of his SF gamechanger on Friday, Dec. 6, as confirmed in the newly-announced schedule for the 2020 online version of the SF fest with a horror streak.

Twohy was already confirmed as a genre favorite for Critters 2 and Warlock, and became a Hollywood player with The Fugitive and G.I. Jane. However, he'll forever be an SF legend for his triple-bill of interstellar horror madness-turned-space-opera-turned-gritty-action franchise with Vin Diesel, the Riddick Chronicles (and, yes, volume four, Furya has been scripted and is in Diesel's hands right now).

Other Worlds isn't just about celebrating the greats of the genre. Last week it dropped its feature and shorts lineup of the best in upcoming SF, as well as its taste for terror in the Under Worlds strand, and also adding the Weirder Worlds selection (find the full lineup here. Today the final piece of film programming locked into place with Brazlian techno-thriller Tales of Tomorrrow, which will be the closing night film.

However, that's not the only addition to the schedule. Other Worlds has always emphasized the social aspect of the future, and has added conversations, lectures, and special events over the years. This time, even though the gathering is virtual, is no exception, including one retro event that SF fans and scriptwriters will not want to miss: A special reading of the "lost" Dan O'Bannon script for Total Recall. The Alien writer's widow, Diane, has become a loyal friend to the festival, and she has hunted down her husband's 1983 draft of the Philip K. Dick story, from seven years and 46 rewrites before the Paul Verhoeven/Arnold Schwarzenegger version finally made it to screens.

That's just the beginning. Other Worlds Film Festival Founder, Bears Rebecca Fonté saud, “I am excited this year to introduce a podcast series, a conversation series, as well as amazing live events such as a SciFi edition of The Big Quiz Thing and the comedy gameshow Part 2: Unnecessary Sequels. Did I mention a theremin concert?!?”

Other Worlds 2020 virtual edition runs Dec. 1-6. Passes and info (including nominees for the Mary Shelley prize for female voices working in the genre field, and the screenplay competition) at http://otherworldsfilmfest.com.

DEFENDER OF THE UNIVERSE SCREENING

PITCH BLACK
D: David Twohy
USA, 112 min, 20th Anniversary Screening
When a meteor storm strikes down a space transport, the eleven marooned survivors discover their barren and hot desert-scape fills with flesh-eating reptiles when engulfed in darkness. Their best chance for survival, a man with surgically enhanced eyes that allow him to see in the dark, Riddick (Vin Diesel), also happens to be an escaped convict. And every twenty-two years, all three suns go down for a month-long eclipse.

TALES OF TOMORROW (CONTOS DO AMANHÃ)
D: Pedro de Lima Marques
Brazil, 85 min
In 2165, Michele's kidnapping drops the city-state of Porto 01, the last stronghold of human civilization, under a state of war. Resembling an elaborate movie plot, Porto’s discord comes to the attention of a 1999 high school student in a package of downloaded files. When they begin to disappear off his computer and his best friend goes missing, Jefferson finds his and Porto’s fates intertwined. A coming of age of Matrix with less combat and more awkward teen romance.

AMONG US Launch Party
One of your crew has been replaced by a parasitic shapeshifter. Vote the imposter off the ship before everyone is killed. The online party game everyone can play (and meet each other). Or just hang out a chat in the Galactic Lounge. Thur., Dec. 3, 10:15pm (Supernova passholders).

2020: A Brunch Odyssey
It may be Sunday morning, but we’ve got Saturday Morning Cartoons followed by your chance to sit at a couple virtual tables and meet this year’s filmmakers. In between, we’ll have our closing Keynote from Noël Wells, University of Texas at Austin (Radio-Television-Film) graduate and Star Trek: Lower Decks voice star (Orion Starfleet Ensign D’Vana Tendi). Sun., Dec. 6, 11am (Supernova passholders).

Soundscape Escape to Other Worlds: A Theremin Live Performance w/ Carolina Eyck
Invented in 1919 by a Russian physicist, the electronic musical instrument the theremin is unique in that is played without being touched. In the 1950s, it became forever identified with Science Fiction by being used in the score of films like The Day the Earth Stood Still and The Thing from Another World. German-Sorbian musician and composer Carolina Eyck has taken the instrument to new heights. Join us for a demonstration, history lesson, and private concert unlike any other. Sun., Dec. 6, 2pm.

The Big Quiz Thing: SciFi TRIVIA Party
Finish the Festival with The Big Quiz Thing. Hosted by America’s premier live quizmaster and the BQT’s founder, Noah Tarnow, The Big Quiz Thing is way more than a bar quiz: it’s a full interactive quiz spectacular, with video and audio puzzles, the Lightning Round, the Buzzertastic Finale, and Smart-Ass Points for wrong, but funny answers. Assemble a team or play alone. Sun., Dec. 6, 10pm.

What Survives a Dan O’Bannon Script w/ Matt Lohr
This year marks the 35th Anniversary of The Return of the Living Dead and Lifeforce, 30th Anniversary of Total Recall, and 25th Anniversary of Screamers. Dan O’Bannon famously adapted works by Philip K. Dick, H.P. Lovecraft, Colin Wilson, and others, and was rewritten long after his original scripts sold. So, what makes a script Dan’s? Hear from the man with the ‘with’ credit on Dan O’Bannon’s Guide to Screenplay Structure. Thur., Dec. 3, 6pm.

Paradise is One’s Own Place w/ Jamie Broadnax
The founder of Black Girl Nerds Jamie Broadnax lays some ‘Black to the Future’ knowledge on us about how Pop Culture shapes our perceptions of race. What is the long-term impact of Black Panther on breaking down stereotypes in genre film? Lovecraft Country? A Black stormtrooper? Why does SciFi have to be so damn white? Fri., Dec. 4 | 6:00 pm CST

The Female Gaze in Horror
It’s time to subvert the bros’ favorite genre and Bears Rebecca has gathered some of the most inspiring female filmmakers working today to tell us how we do it. Jill Gevargizian (The Stylist), Lola Blanc (The Fatale Collective) and Amelia Moses (Bleed with Me). Sat., Dec. 5, 6pm.

Shape of Things to Come w/ Steve McLean
2020 is the 125th Anniversary of H.G. Wells’ original novel The Time Machine and the 60th Anniversary of the George Pal film. HANKUK University Professor of Foreign Studies Steve McLean, author of The Early Fiction of H. G. Wells: Fantasies of Science, discusses the work’s legacy and whether we are on the path to being Eloi or Morlocks. Sun., Dec. 6, 6pm.

The Lobby” Meet and Greets
After many live Q&As and Conversations, guests will hang out in a virtual Zoom ‘Lobby’ to meet attendees (Supernova passholders).

Attack of the Robots: OW’s own podcast with Bears Rebecca and Chris Lambert world premieres (Dec. 1).

I Don’t Get It: Two middle-aged white guys (including Triviamaster Noah Tarnow) admit their own unhipness (Dec. 2).

The Mary Sue Game: Contestants recite self-insert fanfiction with a surprise added trope to appease the judges and win the title (Dec. 4).