The homegrown horror of The Wild Man of the Navidad 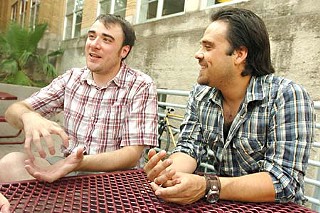 The novice in search of enlightenment studies at the feet of the master. The wannabe horror filmmaker goes to Kim Henkel. That was exactly the path that led Austin's Duane Graves and Justin Meeks to make The Wild Man of the Navidad, a Texas bigfoot tale that arrives in Austin for Fantastic Fest, perhaps its perfect venue. The two met up in a screenwriting class that Henkel, co-writer of the original The Texas Chain Saw Massacre, taught at Texas A&M-Corpus Christi, and he soon was their guru of gore. "We learned from him how to take criticism," Meeks says. "We came to expect a lot of marks. He wasn't into sugarcoating, which makes you perfect your script."

The resulting film is pure Seventies drive-in nostalgia in the vein of American International Pictures, with hints of a slightly less bloody/suspenseful Dario Argento. Graves' camerawork is pleasingly murky, the feel ominous. Craggy locals of Whitsett, a small town 15 miles north of Three Rivers in South Texas, make up most of the cast and lend an odd authenticity that reflects another major influence, Charles B. Pierce's 1972 documentary-style The Legend of Boggy Creek (the co-directors also cite such varied influences as Eraserhead and The Last House on the Left). They even contacted Pierce about offering guidance, but "if he's not running the show, he's not interested," Graves says.

Henkel, who co-produced the film, also taught Graves and Meeks about showmanship and the hazy mix of truth and fiction that the makers of Chain Saw and its sequels used to full advantage. Yes, there is a Texas legend of the Wild Man – J. Frank Dobie actually talks of the Wild Woman of the Navidad in Tales of Old-Time Texas – and, yes, it does center on the ironically named Sublime, Texas. But the filmmaking duo took that story and commingled it with one they say they heard from a guy named Dale S. Rogers at Red's, a bar in Sublime. "He was passionate and interesting," Graves says. "He would have made a great documentary subject." Meeks adds, "He was a smart individual." Graves: "But disturbed." Meeks: "But not in a way that's dangerous."

In the film, Meeks, gregarious in person, portrays Rogers as, well, meek. It's a strong performance on which the film's success hangs. Rogers lives with his wheelchair-bound wife and her lecherous and shirtless aide in isolated squalor. Rogers offers, as his daddy and granddaddy did before him, a meaty offering each night to keep at bay the creature roaming the back 40. When Rogers loses his welding job, the only solution is to open the land to hunters whose fates are summarily sealed as squishy bits of their guts fly hither and yon. Add a lot of moonshine and pickup trucks, and you have a beastly, backwoods showdown on the horizon.

Henkel may be their mentor, but the late Robert Burns, art director on the original Chain Saw, would certainly smile at the Wild Man as created by Meeks, who haunted a butcher shop to collect skins of everything from deer to coyotes to hogs and then tanned them in his back yard to the total fright of meter readers. He attached them to an overcoat found at a Goodwill store to create the monstrous, saggy beast. "If we put in CGI in this, it would go totally against what we were trying to do," Graves says of the costume.

Or perhaps the pair could be compared to Robert Rodriguez, times two. They shared as many hats as possible – writers, directors, editors, actors, camera jockeys – on the low-budget film, which was shot over six months of weekends on land owned by Meeks' father. After another year editing, they premiered the film at the Tribeca Film Festival. Next comes release as video on demand by IFC through its Festival Direct program, which recently also released brothers David and Nathan Zellner's Goliath (Meeks and Graves joke that they've considered officially becoming filmmaking brothers as well: "I'm the nerd, and he's the hand shaker," Graves says). The future looks bright for the duo, who are on the verge of signing a deal to shoot a Western in Texas. "You have to always put the movie first," Meeks says of their continued collaboration. "It's not about Duane; it's not about me. It's about the movie."

The Wild Man of the Navidad screens as part of Fantastic Fest at the Alamo South Lamar on Sunday, Sept. 21, and Thursday, Sept. 25. Filmmakers Duane Graves and Justin Meeks will be in attendance, along with select cast members. For more info, visit www.fantasticfest.com and www.wildmanofthenavidad.com. 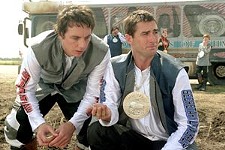