En Garde and Armed With Latex and Brushes

When Michael Faust walked onto the set of Face Off, he was in for a surprise. The Austin native thought he knew a lot about SyFy's makeup effects reality competition show: After all, his brother, Matt Valentine, had been one of the stand-out contestants of the second season. As he introduced himself to the rest of the Season 4 cast, he heard some familiar accents. He said, "'I'm Michael Faust. What's your name?' 'Eric Zapata.' 'Where are you from?' 'I'm from Austin.' 'Hey, I'm from Austin.' And then you hear Jenna [Green] say, 'Hey, I'm from Austin, too.' 'Holy crap, we've got an Austin crew here!'" That's right: Central Texas has a triple shot at winning the show. 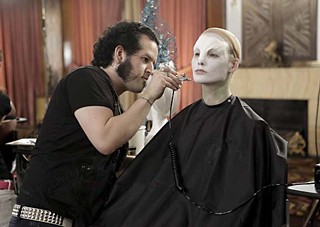 For Faust, it was a chance to work alongside new homegrown talents. He and his brother have always been a team, from their respective roles as general operations and artistic directors at the nationally acclaimed House of Torment haunted attraction to their FX company Global Fear Enterprises. Even though the show has boosted Valentine's career to new heights, Faust saw it as a great opportunity to get a win for the family. Valentine walked him through what to expect on set, giving him "a cheat manual that I could pull out of my head." However, Faust said, "I wasn't trying to impress anybody but myself, and really just compete against myself." While Valentine was always the 'high art' creator, influenced by Francis Bacon and Joel-Peter Witkin, Faust concentrates on the performance side and is as used to being under latex as he is to shaping it. "I would apply it the way I would want to wear it," Faust said. "I know how it's going to affect the model, so I apply it in a way that they're going to be able to breathe or run."

He wasn't the only Austinite with the inside scoop: Zapata attended the Tom Savini Special FX School in Pittsburgh with Season 2 runner-up Ian Cromer. Zapata said, "We were inseparable, and we taught each other a lot of what we both know now." Now Cromer is working on major projects like Danny DeVito's upcoming apocalyptic horror, St. Sebastian. "I was so jealous," Zapata said. "I told him, 'You got to work with the Penguin? That's so cool.'" Not that Zapata sat on his hands, post-graduation. After working at industry legend Robert Kurtzman's Precinct 13 effects shop in Ohio, he and other Savini alums moved to Austin to found their own production company, Archimedes Media Lab. They are currently working on the sci-fi comedy short, "Point of Interest." Yet as much as Face Off spotlights fantastical designs, Zapata says his work is heavily influenced by Dick Smith and Greg Cannom, who made their reputations with subtler brush strokes. Zapata said, "If you look at my portfolio, you won't see many creatures. You'll find a lot of old-age makeup, a lot of character makeup."

If the show is the next step for Faust and Zapata, then for Green it's a return to the art form she loves. Like Faust, she was self-taught from a young age, using her mother's eye shadow to simulate bruises. Then horror movies changed her life. She said, "I didn't have a problem being afraid of them, because I knew it was all fake, but I remember being totally mystified because I couldn't believe how cool characters like Linda Blair in The Exorcist were." Her tutors were makeup books, and she experimented to create her own tool kit. She said, "I used to play around with things that weren't conventionally used as makeup, like pastels, glue, all kinds of different things I would co-opt to make bruises or scars." She cut her practical FX teeth at Halloween, making ghouls for the old Haunted Trails at Wild Basin before providing practical effects for local independent features. Four years ago, she was hit with a triple blow: She got divorced, lost her job, and was diagnosed with ovarian cancer. She put her creative ambitions on hold until last year. Green recalled the turning point: "And then one day I was watching TV and saw a commercial for Face Off. ... I thought, I can so do this."

Season 4 of Face Off premieres Tuesday, Jan. 15, 8pm, on SyFy. Weekly recaps can be found at austinchronicle.com/blogs/screens.