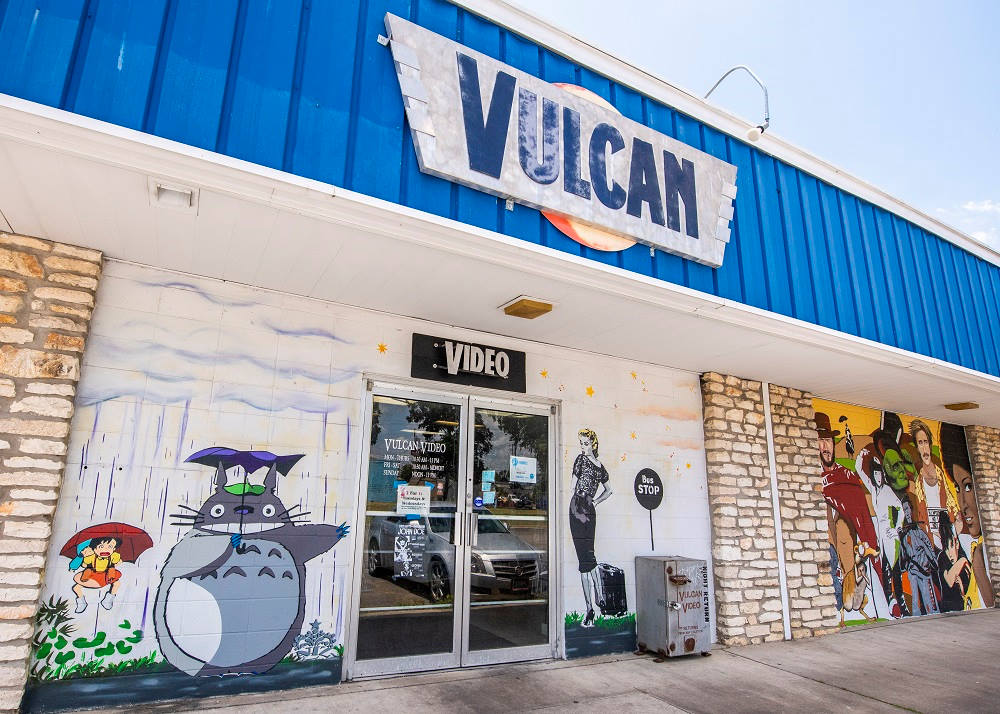 Vulcan Video, one of the last remaining video rental stores in America, has closed its doors for the last time (Photo by David Brendan Hall)

A sad day for the Austin film scene as staff broke the news via Twitter that Vulcan Video, the long-lived and beloved video rental store on Ben White, has closed permanently.

Vulcan's place in Austin's film history is undeniable. Founded in 1985, it was part of the explosion of small VHS rental stores: However, most of those rental outlets were taken down by rising costs, the rise of streaming platforms, and the market dominance of Blockbuster. Sadly, while Vulcan survived for decades longer than most of its competitors (and even outlasted the big rental chains), now it joins other lost independent video stores like Pedazo Chunk, Encore, and the Movie Store on Guadalupe.

Like other businesses, it had struggled to deal with the impact of the coronavirus, offering extended rentals and phone ordering before closing the store and suspending late fees on March 24. However, the store was already in financial difficulties before the current lockdown. The last few years had seen multiple changes in location due to rent increases, and a consolidation from two sites down to one – the final location on Ben White. Last May, the management launched a GoFundMe campaign to help cover operating expenses. Operations Manager Matt Taylor told the Chronicle at the time, “At this point, the place is practically a nonprofit in everything but official registration; a public service we provide that also doubles as a community center and time capsule of sorts.”

That's why the closure will hurt so many Austinites. In its old West Campus and Elizabeth Street locations, Vulcan played a pivotal role in the film education of generations of cineastes and movie enthusiasts (including many Chronicle staff members). The combination of classic and grindhouse, imports and underground titles – many of which have never been available in streaming formats – on its shelves has been an essential archive. Every generation of new movie-watching technology has seen films be lost, as studios let VHS releases languish and never make it to DVD, never mind Blu-ray. Vulcan's position as an archive is immeasurable, not only locally but nationally as the video store industry stands at a fraction of its former size. There are still some independents, while Alamo Drafthouse got into the VHS game with its Video Vortex store in Raleigh, N.C., and there's still the Family Video chain throughout the Midwest.

However, the catalogs of other stores are a separate issue, because Vulcan didn't just archive movies. It's also opened its doors to up-and-coming filmmakers as a shooting location: in the last two years alone, both upcoming horror-comedy anthology Scare Package and in-production relationship drama Millennium Bugs shot there.

The most undefinable impact will be the loss to the community. Vulcan was a hub for those who loved to hang out and talk movies. Even in what turned out to be the store's twilight months, the staff launched the Taps and Tapes series of rare and obscure titles. While Austin will still retain a connection to rental history with the other long-term survivor, I Luv Video on Airport, still open, the loss of Vulcan Video leaves a gap that will never be filled, and memories of a true institution.

After 35 years we are closing the doors at Vulcan Video.

We opened when VHS was becoming a thing and we wanted an art house equivalent of Blockbuster. As lifetime movie lovers, this was a career that actually looked fun.

The first years of Vulcan we were actually a part of a poster store, Movie Art. After two years we became Vulcan Video on 29th Street, near the campus. To make a (very) long story short, it was great. Our second greatness was in South Austin at Elizabeth. Lovely. And now at Russell Drive, we come to this. High rent, online video, and then Corona Virus. Sounds like a movie villainess. Kind of is.

We simply cannot support extending our business into an uncertain future, even of several months.

Thanks to you, all our dear customers who literally made it possible, and to the Chronicle and the Statesman for your loving support, and to the many staffs over these years who have unselfishly shared their vast movie love on the front lines.

If you currently have movies rented from us stay posted on where to return them once it is safe to do so.

Bless you all and stay safe,
Vulcan Video