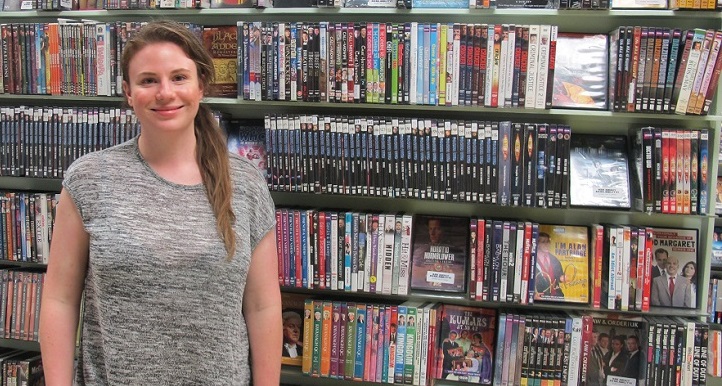 Who said video rental stores are dead? Turns out, in Austin they're just migrating to where the renters are. Walking through the packed shelves of the new Vulcan Video, relocated from South Congress to South Manchaca, general manager Kristen Ellisor said, "No one's where they were 10 years ago."

It's been a tumultuous few years for video rental stores in Austin, and it's nothing to do with Netflix. First Vulcan moved from its old UT location at 29th and Gudalupe, up to North Loop. Then beloved rivals I Luv Video closed their own UT site and re-engineered their Airport store into what they proudly boast is the largest video rental store remaining in America.

Now, after a six-month hiatus, the new Vulcan south is open, after being pushed out of its old location on Elizabeth Street. The old space is being redeveloped by Güero's Taco Bar owner Rob Lippincott as a mixed-use project, and while there was talk of Vulcan moving into the new structure, the collection has relocated just south of Ben White, into a new neighborhood home with plenty of parking.

Of course, closing for six months was a risky move, but after only four days open, there are already a mix of loyalists, old members that followed them, and a new cadre of renters who are checking out the store for the first time. There have also been some unexpected returns. Ellisor said, "On day one, we had a guy come in who hadn't been into the store since 2004, because he moved out of that SoCo area to here, and it was a pain going down to South Congress. 'Why do I want to sit in festival-of-the-week traffic? But you're in my neighborhood now, so let's reactivate.'"

Vulcan has taken over three-fourths of the new property (the blue-and-white livery outside gives it away as a former Glidden paint store) and are still hoping for another tenant to take over the remaining quarter. In the meantime, there's plenty of work to be done on their own side of the site. The old shelves from Elizabeth Street (which spent the last few months in owner Dian Donnell's backyard) have been spruced up with a lick of new paint, with a few extras shipped in from 29th and Guadalupe.

At 3,300 square feet, it's larger than any of their previous sites, which means more space for discs. That's essential, since the team is still processing the last six months of releases ("Only slightly daunting," said Ellisor). It also means there's more shelf space to put covers facing forward, so fans have even more chances to appreciate the glory of box art. "That makes such a difference," Ellisor said, "Because it makes it so much more appealing to look at, get excited about, and grab things."

The space also allows them to keep their commitment to reflect the fact that, far from being a dying medium, DVD is still vibrant. New films, and new editions of old titles, are still regularly released, and even if it's a title that's already on the shelves, then a new cut or a new edition with real added value is a must-have. Ellisor said, "There's lots more TV and TV comedy room, and all the foreign titles are in this L, which is nice because it gives us space to grow." It also gives them the flexibility to reflect the changes in the market. Ellisor said, "We started the comic book exploitation section as a joke, because that's the kind of joke that video store clerks make, and then two years passed and every movie that's coming out is a comic book movie. So now we can have an entire half wall."

There's a lot of thought put into where everything goes. Like any store, layout is everything. So while the casual movie fan might expect the new releases to be located right opposite the front desk, it's the anime section. Ellisor has a one-word explanation of why: "Miyazaki. Studio Ghibli is such a huge deal to everybody in the world. It was the thought of being able to point from the counter, right there. 'Where's My Neighbor Totoro?' Right there. 'Where's Spirited Away?' Right there."

Not every film or show has that immediate connection with audiences, but Ellisor sees the value in Vulcan playing the long game, and acquiring and retaining titles that might take a while to find an audience. "We buy it, we put it on the shelf, and it doesn't necessarily have to make money in that first year. But every time there's the Tarantino movie, every one of those movies that's in that genre block, all of a sudden it's a hotter commodity, and people are interested in it. There's this connection, because we already have them on the shelves. You don't have to play catch-up."

And, yes, there's still a VHS section, and there are still people renting. Who are these mysterious analog activists? Ellisor said, "The two people who rent VHS are aggressive cinephiles who know, 'Oh, I can't get this any other way'; or aggressive film fans who go, 'Oh, I really need this one movie. You have it on that?' It's worth going to Goodwill for an $8 VCR for this one movie that I've been talking to my kids about for the last 30 years." Are You the Jerk Vulcan Video Wants Arrested?
If so, stop it