Singing the praises of State of Play and Vulcan Video 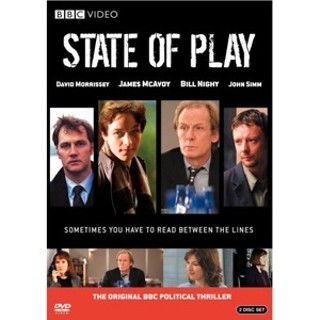 This BBC miniseries is crazy good. They have it at Vulcan Video.

Continuing an informal series in odes to local video stores, count this one as a shoutout to Vulcan Video. But we’ll get to that.

First: I should have been British. I hold this truth to be as self-evident as the restorative powers of a half-pint of Tamale House hot sauce. Granted, I tried living in England once, a brief summer blip interning for what would eventually be known as the house that built Harry Potter (the movie), Heyman Films, and what I took away from those few months, aside from the added pub weight, was the realization that I, like Jo from Little Women, am not fashionable enough for London. And yet, I stand resolved: There’s a tavern in some sleepy burg, where everyone is plumpish and bad-toothed, and in that tavern there is a pint, forever full and frothy, with my name on it.

How do I know this? Let me count the ways. It started with an early, unhealthy obsession with the British royalty and their yen for dismantling a head from a body. Eventually, I maturated to a love affair with Brit film – especially Winterbottom – and all things BBC. The comedies – like the original, impossibly squirming Office (as much as I love Pam and Jim, until their affair plays out to Yaz, they’ll never hold a candle) and Spaced, which finally gets a DVD release in July (watch this space) – and the dramas: glorious corseted stuff by way of Austen and Trollope. And then the mysteries. I’ll run screaming from any hint of real horror (case in point: I quivered through a mere half-hour of next week’s release The Strangers before I bolted for the exit), but give me a fuddy-wuddy Marple Mystery or cool-cat Inspector Lynley and I’m a happy camper.

Before I fully paint myself as irredeemably unhip, consider this: There is a certain kind of political thriller that the Brits do better than anyone else. Heirs to the 70s heyday of Serpico and Three Days of the Condor, these sprawling British miniseries – like The State Within and State of Play – examine and challenge our current geopolitical clusterfuck in a way American television has yet to. But you can be sure America’s taking notes – filming just wrapped on an American feature adaptation of State of Play starring Russell Crowe and Ben Affleck. While I firmly believe that no-way, no-how can the original series be topped, I am curious – and if ever there were a nation that needed to address head-on the oil crisis and its attendant corruption, Amurrrica’s it, for sure.

But back to the original BBC 2003 series, which was only just released on DVD in the States at the end of February, at which point it wallowed on "long wait" at the top of my Netflix queue. From director David Yates (who made the first truly kickass Harry Potter adaptation, The Order of the Phoenix), State of Play splits time between a Parliament scandal and the newspaper team assigned to investigate (led by Bill Nighy at the top of his craggy-bastard game). What initially seems like another boilerplate sex scandal story unravels to encompass investigative journalism, class clashes, cheating husbands, and the long arm of Big Oil. Smart, savvy, terrifically acted and utterly addictive, State of Play is the kind of deeply satisfying, adrenalined entertainment that actually made me fist-pump the air repeatedly.

I inhaled the first three-hour disc from Netflix in one sitting. Like a junkie coming down and desperate to reup, I hit the phone. Vulcan Video saved me – the only local store in stone’s throw distance that had what I was looking for. Honestly, I felt humbled, and a little caddish: They didn’t give me shit for being a fair-weather friend, didn’t even mention what I’m pretty sure are 3-year-old late fees. I neglected them, and in my hour of need, Vulcan was there, and didn’t ask any questions.

When I inhaled the last three hours of State of Play in one sitting, I fist-pumped at least three times more. Vulcan, don't think those fist-pumps weren't meant for you, too.