Jonah Hill Goes Back to the Mid90s

Director's debut is a film he can stand by 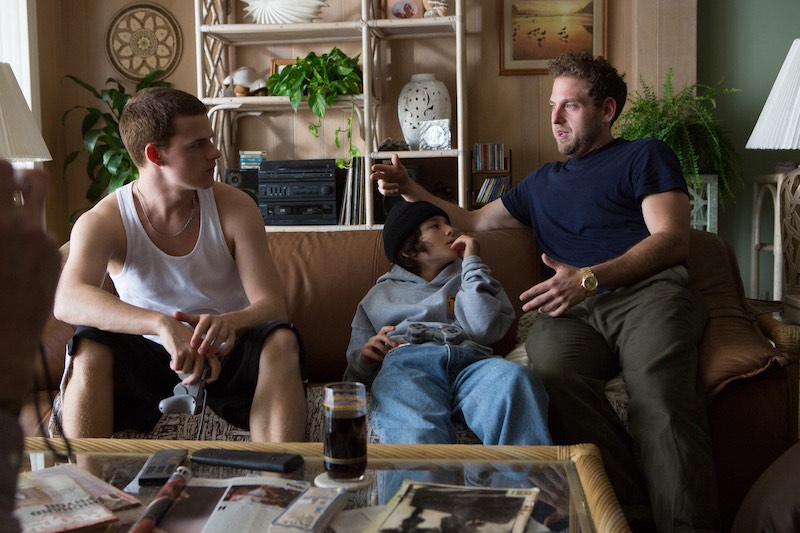 Lucas Hedges, Sunny Suljic, and Jonah Hill on the set of Mid90s (Photo courtesy of Neon)

In one of the karaoke rooms at the Highball during Fantastic Fest last month, there's a quick discussion between Hill and his actors about the difference between the more West Coast breakfast burrito and the Texan breakfast taco. The consensus seems to lean towards the Lone Star's contribution to morning cuisine. It's the kind of freeflowing chat, about everything and nothing that defines Hill's debut feature behind the lens is a flashback to pre-millennium Los Angeles, where Stevie (Sunny Suljic, The Killing of a Sacred Deer) is the little brother in a dysfunctional family, who finds a new home among a crowd of skateboarders: Some, like Ray (rapper and pro boarder Na-kel Smith) dream of making skating their living; Some, like Fuckshit (Olan Prenatt) just like to hang and party; And some, like Ruben (Gio Galicia) skate because it's better to be there than at home.

The press tour for the film was both a reunion with the cast (some professionals, some first time actors), and a chance for Hill to look back. "It's been a fun year," he said, "getting to make projects that you care about."

Mid90s follows from two of the best reviewed performances in Hill's career: His leading role in Netflix's Maniac series, and his supporting role in Gus Van Sant's Don't Worry, He Won't Get Far on Foot, playing Donnie, AA sponsor to paraplegic cartoonist John Callahan (Joaquin Phoenix). "Gus is the best," said Hill. "And Joaquin's the best. he loves this movie. He came and saw one of the first cuts of the movie, and he loves this film. He's been really supportive."

Austin Chronicle: When you're working on a passion project like this, where you're acting and directing and writing, how does it feel like it's finally out there in the world, and not just the perfect film in your head?

Jonah Hill: All that matters is that I stand by it. It's exactly what I wanted to make. It couldn't be more literally what was in my head, and then these amazing artists brought it to life.

For me, it was always this private thing, where if I was angry or lonely I could go to my room and work on Mid90s, and that was my special thing. And then getting to make such special friends and bring other people on the journey, and have them work so hard to make this thing come to life, it was the most moving experience of my life. I just miss being there, but now I love that we all get to be together, and celebrate what we worked hard on.

AC: When did this start asa project for you? Because if this has been in the background, where did it coe from in tehg first place

JH: I've been doing this for 15 years in the film business, and just been getting a masters in filmmaking, because that's always what I wanted to do. I've gotten to work with all my heroes, and to me it was always just about at what point do I make my first film. What I learned from all the masters is that it has to mean something to you. Those are the ones that you remember and you stand by later on.

I was writing a play with Spike Jonze, and we were talking about what we were both writing on the screenplay side of things. I was walking through what I was thinking was going to be my first film, it was something totally different, and it kept flashing back to when the main character was 12, skating with his friends. [Jonze] said, 'you really light up when you talk about the flashbacks, and you seem more interested in that than the a-story. Why don't you just film that?' So four years later, here we are, sitting in Austin with characters that were in my head now brought to life by these young men. It's pretty surreal.

AC: Mid90s feels very timely because there's a lot of discussions at the moment about male relationships and friendships, and what works and what doesn't.

“The best directors I’ve work with are able to say the least, and get exactly what they want. I would always be surprised how little Martin Scorsese would talk to me - not just me, any of the actors. He wouldn’t come up and be like, blah blah blah, like this, this, this this. It was, ‘can you create that with the environment?’ and let the actors go there on their own.”
JH: I just wanted to tell an animal kingdom story about how someone works their way up. That framework of skateboarding was my version of the animal kingdom, because even though this wasn't a biopic or about my life, it was how I learned to maneuver - hanging out with older people, maneuvering into a friend group - which is what people seem to connect to the most, whether they skateboarded or not. It's just, wow, I remember having to work my way into a friend group. Everyone understands that.

The best directors I've work with are able to say the least, and get exactly what they want. I would always be surprised how little Martin Scorsese would talk to me - not just me, any of the actors. He wouldn't come up and be like, blah blah blah, like this, this, this this. It was, ‘can you create that with the environment, and let the actors go there on their own. I loved watching [the cast] get to the place get to the place you want them to get to, but to get there using their own minds, as opposed to me forcing them into that corner. I love that. That's the coolest part about directing, for sure.

And these guys would work so hard. Each day you'd see them getting boundlessly better at becoming actors. It's so amazing.

AC: So how much was the final result shaped by the original script, and how much by finding cast members who you went, OK, there's something they're naturally going to bring to this>

JH: I spent three years on the screen play, so I was willing to throw it all away if I wasn't able to find actors who were able to inhabit these characters. But they didn't want to improvise much. They were interested in becoming these characters, and learning this dialogue, and doing all this stuff, so that's the road we ended up going down.

The only rewriting we had to do based on casting was when we met (Olan Prenatt as Fuckshit), because he was so funny. The character wasn't as funny, and Olan was hysterical, so I was like, of course I'm not going to suppress this. This guy would walk in and lit up the room, so I'm going to lean into his natural light. So I had him and Na-kel (Smith as Ray) switch characters, and rewrote for his amazingness. He's one of a kind, and I struck gold. And Na-kel has a real heaviness to him. Even when he's being light, he can have a weight to him that's beautiful, and I wanted to utilize that as well.

AC: One of the best moments is when Ray's building the deck for Stevie. It's such a wonderful relationship beat, but it's so quiet.

JH: But even something like that, Sunny and I will talk for a long time about what that means to him, what that is about, and then he doesn't have to say anything. He can just know what it is in his head, and if we talk about it enough then that just comes out in his eyes. Whether you skate or not, it's about someone who is older teaching you a routine that you will do the rest of your life. You never forget stuff like that.

Mid90s opens this weekend in Austin. For review and showtimes, visit our listings page.