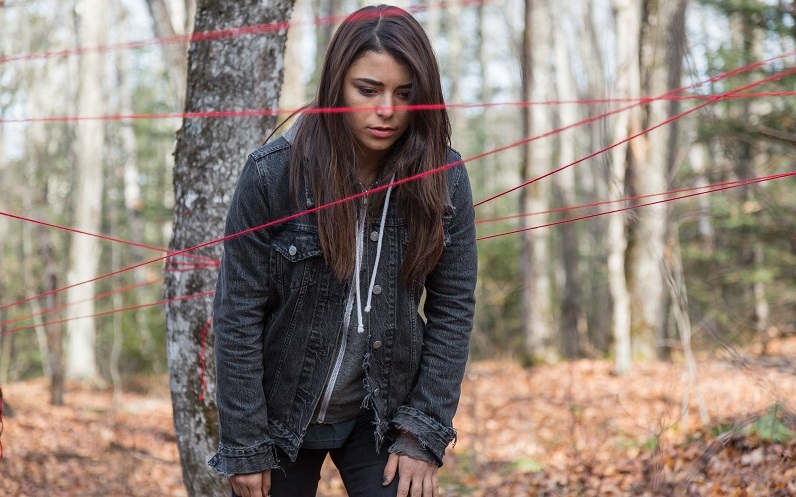 The woods are unlovely, but still dark and deep in Pyewacket (Image courtesy of IFC Midnight)

When Witchfinder General Matthew Hopkins brought his reign of madness to the English village of Manningtree in 1644, he claimed that one of the familiars summoned by a local witch was an imp called Pyewacket. It seems that time and ocean are no barrier to the evil creature's deceptive machinations.

Canadian writer/director Adam MacDonald's follow-up to his grisly, gritty survival horror Backcountry is a tale of small-town Goths and how prepared they are to dance with the devil. Leah Reyes (Nicole Muñoz) and her friends talk a big game about playing with sorcery and conjuration, but most of them know when to back away. Not Leah, who tells the author of a book about witchcraft that they didn't include enough about ceremony. Her boiling frustrations at her mother (The Walking Dead's Laurie Holden), who can't get over her husband's death, turns into out-of-control teen fury, and that's a toxic combination with her own off-kilter interest in the occult.

Don't worry, this isn't a Tom Hanks Mazes and Monsters attack on brooding teens and black clothing. Instead, it's about Leah cracking the door open to something that has always been scratching at the outside. When her mother tells her she's moving them to the ass-crack middle of nowhere, her cold fury is too much, and it's this heady mix of survivor guilt, loss, and intergenerational tension that provides the real drama.

It's not that MacDonald is rewriting the spell book on this kind of teen witch terror: Every beat, jump scare, and convention you would expect (including Bitten's Rowan Dove as the black magic expert on hand for timely warnings) is woven into the blanket of fear. However, like The Witch or The Blackcoat's Daughter (aka February), Pyewacket's strength is not purely in innovation but execution. As Leah's grasp on reality is pulled away, finger by finger, and Pyewacket insinuates itself into her world, slowly, menacingly (a task carried greatly by a switchback performance from Holden), it's a preordained path to damnation.

The looming inevitability is a strength, not a weakness. The idea that Pyewacket, once summoned, will manipulate through the most plausible of deceits, is what provides the most chills. Christian Bielz's tight, hand-held cinematography gives an intimacy and immediacy in these grey, tree-lined barrens, while MacDonald holds Lee Malia's brittle string score at bay until it serves as a spark to an incendiary resolution.

Pyewacket is available on VOD from IFC Midnight now. Also out now:

IFC's other big upcoming horror release, Wildling, will be released on April 13. For an interview with director Fritz Böhm about finding a new space in the teen wolf canon, and bringing lycanthropy back into the daylight, read Nurture vs Bloody Nature

Behind the Mask: The Rise of Leslie Vernon stands with The Poughkeepsie Tapes and JT Petty's S&Man on the list of "great horror films from 2006-7 that never got the release or reception they deserved." Now a sumptuous Blu-ray re-release from Scream! Factory, over a decade after its first screenings, means that the revisionist deconstructionist slasher flick gets the treatment it deserves. Half Scream, half Man Bites Dog, the tale of a slasher who lets a TV crew follow him on a killing spree both cherishes and dismantles the tropes of the genre with a rare lightness of touch. Vernon (Nathan Baesal) does not simply reference the conventions of survivor girls, and the legacy of Freddie, Jason, and Michael, but gives them a twisted logic. His wiry, gymnastic performance – as caught in both perfectly executed mockumentary and classic Nineties glossy horror executions – is a masterclass in having your indie cake and eating it.