Sometimes a missing movie turns up, and the mythology that grew up around its absence eclipses the film itself. It's rare that one can ever live up to the shadow it casts. The Poughkeepsie Tapes is one of those rarities, a mockumentary that is as scarring and brutal as its legend suggests.

Make no mistake: This is one of the most unrelenting low-budget horrors of the last 20 years. It is as disturbing, shocking, and graphic as anything produced under the banner of the New French Extremity, melded with a lo-fi aesthetic that strips away any of the distancing veneer of beauty that the scene's glossy/grisly aesthetic provided.

Consider that your warning.

The disappearance of The Poughkeepsie Tapes has led to speculation that it was that rare creature, a horror too extreme for audiences, but that's not quite the story. After a brief festival run in 2007, MGM had it lined up for a wide release, springboarding off the recent and unexpected success of Paranormal Activity. At the last minute, it was inexplicably pulled, and aside from a bizarrely brief 2014 VOD release, it has been invisible for a decade. Yet now Scream! Factory has given it the home release horror hounds have craved.

How long has this film been missing? So long that director John Erick Dowdle made 2008's U.S. remake of Rec., Quarantine, plus 2010's Devil, 2014's As Above, So Below, and 2015's No Escape while it has awaited a release. None of them even came close to its taboo-busting brilliance.

This is not a found-footage film: This is a fake documentary about a stack of found footage. A serial killer has been operating, undetected, in and around Poughkeepsie, New York. The first solid evidence that a string of seemingly unrelated deaths and disappearances are the work of one murderer is when police uncover boxes and boxes of videotapes. Filmed by the killer – known only as Ed – they chronicle his bloody deviancy.

Imagine an extra-long rough cut of a true crime TV show, just before standards and practices swoops in and screams "There is no way that hits the air!" It's a kick in the face to the post-Silence of the Lambs serial killer tropes, where serial killers are all charming geniuses, Road Runners surrounded by Wile E. Coyotes. Ed is smart but malevolent, and the malevolent is always to the fore.

Nothing about this film is easy to watch. Take out the more conventional and graphic horror elements, and this is still an insanely harsh drama about how the trail of carnage left by a serial killer devastates everyone. The families, the victims, the police officers, the FBI profilers, and it is all exacerbated by the knowledge that Ed is quite simply just fucking with them. The tapes themselves are just another twist of the knife.

Then there is the footage from the tapes, and Dowdle and his co-writer/producer/brother Drew have crafted some of the most disturbing images of contemporary low-budget horror. Some are simple, some are florid, some are just plain disturbing. They are a record of sadism, and they are intended to be upsetting. Anyone expecting simple jump scares, move on, because this is somewhere between the unrelenting intellectual assault of a Michael Haneke, and the graphic extremes of a Toetag Pictures gorefest.

The Poughkeepsie Tapes (Scream! Factory) is available in a DVD/Blu-ray combo pack now. Also out now: If there's a message to be taken away from Bushwick (RLJ Entertainment), it's "Don't trust Texas separatists."

The script for this gritty action flick by Nick Damici (Stakeland, Late Phases) and go-to genre sound designer/composer Graham Reznick occasionally has the feel of a video game – most particularly, a brutal DLC for a post-apocalyptic, politically tinged first-person-shooter, of the Get Even/Wolfenstein II ilk. That the opening half hour is shot in one long take, following Lucy (Brittany Snow, Pitch Perfect) as the city goes to hell, even has the feel of a game intro.

She's clearly going to last about 20 minutes on the streets of her home borough of Bushwick, as there's a full-bore war going on. Her first suspicion is another 9/11, but then she's semi-accidentally rescued by Stupe (Dave Bautista), a former military medic with a vague clue about what's going on.

For much of the duration, knowing why takes a second place to just surviving. When the slower moments of discussion come – still often at gunpoint – it's an intimate retelling of a modern civil war, one that is clearly not falling for any "states' rights" revisionism. New York is invaded by a bunch of racists seeking to destabilize the Union who get exactly the welcome they deserve.

Shot two years ago, this has been released due to Bautista's ascendance as a high-profile actor. It's a long way from his big, boisterous performance as Drax in the Guardians of the Galaxy franchise, and much closer to his Blade Runner 2049 portrayal of Sapper, the slave turned warrior turned healer turned farmer. Coda: Bautista had his previous career as a professional wrestler held against him, but anyone who followed his career in the squared circle will know he always strove for a grasp of character and narrative. His use of his physicality here is something to note and absorb.

Grinding and oddly hypnotic, this is a very different take on New York Strong. While not in the same league as the leviathan The Purge franchise, there's more than a passing relationship to the political bleakness of street-level sociological thriller Parasites (a film far beneath most audiences' radar, but well worth watching for fans of mercilessly subversive cinema). Plus, watching four Hasidic Jews treat some numbnut neo-Confederates to a Molotov cocktail is well worth the price of admission. 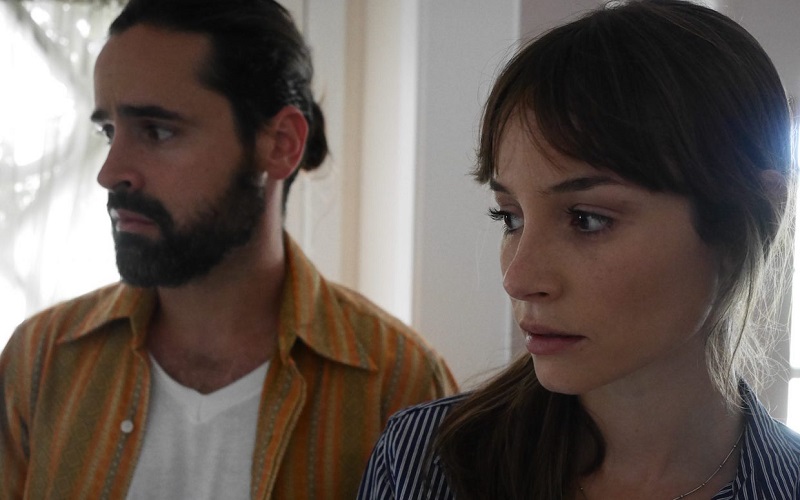 Invasive evil of another kind in Dead Awake, the fourth feature from Austin director Phillip Guzman. The script by Final Destination creator Jeffrey Reddick goes to the same source material as Wes Craven did for A Nightmare on Elm Street – the idea that a dream can be so scary that it will actually kill you. Here, it's the Night Hag, a hideous witch that throttles sleepers, only for their death to be written off as sleep paralysis.

This lo-fi horror (currently available on Blu-Ray and DVD, and streaming on Netflix), does not break much new ground. While the Nightmare comparison is only superficial, this is undoubtedly in the post-Ring/Ju-On mold of cursed victims unpacking what menaces them. However, Guzman lifts the story above the pack with his cast: smart indie horror mainstays Brea Grant (Applecart) and Jocelin Donahue (The House of the Devil, The Frontier), who pulls double duty as identical twins afraid of slumber. And finally on dedicated horror streaming site Shudder, one of the most eagerly awaited scarers to have come out of Austin a year after its local debut at Austin Film Festival, Found Footage 3D. The film balances the comedy with a wry sprinkling of self-awareness, without ever undercutting the genuine scares. Read our set visit report here, and our interview with writer/director Steven DeGennaro here.