“It stopped me in my tracks,” the musician and visual artist recalls to Qmmunity during a drive home from Pasadena. “I got an email from Curran and he was like, ‘Wow, we would really love to have you do this, and by the way, let’s give you the Legacy Award, too.’” 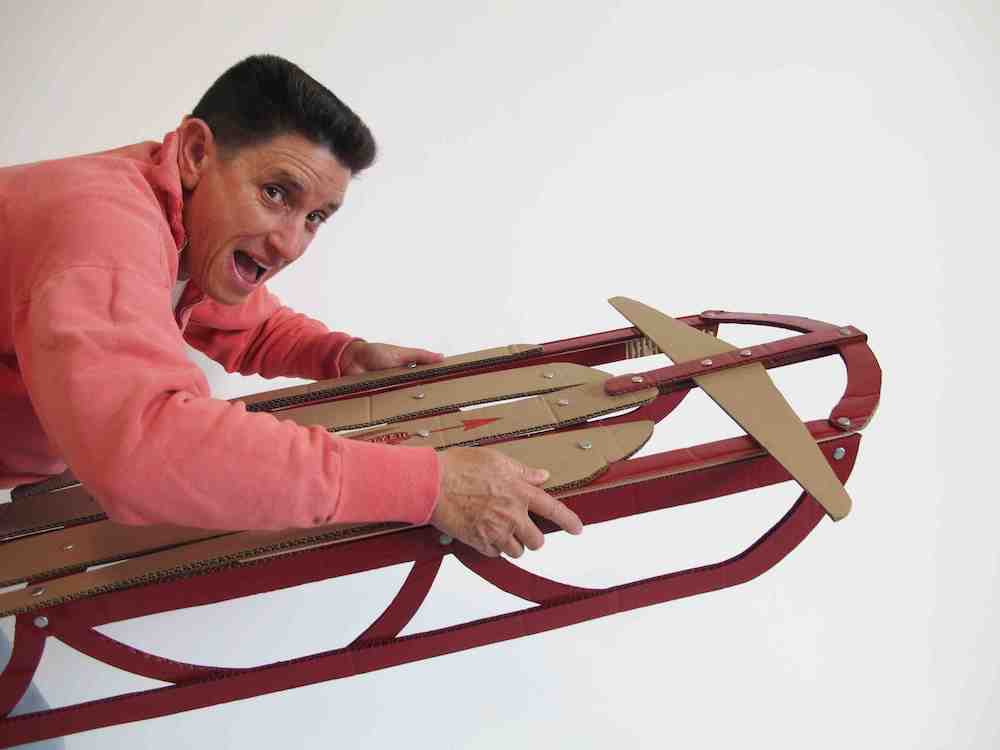 Operating under double monikers (“The All-American Jewish Lesbian Folk Singer” and “The Cardboard Cobbler”), Phranc put the “butch” in folk long before Canadian crooner k.d. Lang and paved the path for Queercore, all before transitioning to a successful career as a visual artist. When choosing the fest’s Legacy Award recipient, Nault says he’s always looking for an OUTsider in all senses of the word: “An artist who was ‘OUT and proud’ at a time when it was (even more) risky to be openly LGBTQ,” but also an “OUTlaw,” he says. “A misfit, a queerdo, someone on the margins of the margins.” For Nault, Phranc embodies both of these requirements. “She’s an icon of outness, with her long legacy of explicitly queer songs that never minced words.” Nault adds, “And she’s a badass weirdo who makes hilarious and heartfelt music and art that is as provocative as it is poignant.”

Born and raised in the California beachfront city (where she still resides today), Phranc spent her teenage years playing folk guitar on the boardwalk before enrolling at the now-closed Feminist Studio Workshop, a nonprofit arts and education center in L.A. lauded for its role in the feminist art movement. After completing two years at the center, Phranc set her eyes on what she hoped would be the queer meccas of all meccas: the City by the Bay. “I went up to San Francisco to find some more women, and I found punk rock,” says Phranc. Immediately, she fell in love with the hyper-political punk subculture of the late Seventies, becoming fast friends with groups like one-time Sex Pistols openers the Avengers. “Everybody was my age and angry and were political and wanted to sing about stuff that mattered.”

Only able to find work nude modeling at the Art Institute in San Francisco, Phranc, sporting her now signature short, flat-top haircut, returned to L.A., this time in search of more punk rock, where she drifted – mostly alone – between shows. Then came that fateful Avengers show. “I was leaning up against a wall, not knowing a soul. This guy just came up to me and went, ‘Do you want to be in a band?’ You know, not ‘Can you play an instrument?’ Just based on how I looked, and he went, ‘Great. It’s called Nervous Gender.’”

Nervous Gender, which Phranc describes as a “very experimental, electronic, synthesizer-based punk band” comprising her and three gay men, proved foundational to the subcultural queer punk movement known as Queercore. “Phranc was not only queercore before such a thing existed, she was already punk before the concept had fully formed,” says Nault. “Bands like Nervous Gender pushed buttons – in terms of lyrics, demeanor, and dress – that are still taboo today.” (Years later, Phranc inspired Nineties queer punksters Team Dresch’s classic ode “Uncle Phranc.”)

Along with Nervous Gender, Phranc lent her axe-grinding skills to Catholic Discipline (featured in the seminal L.A. punk doc The Decline of Western Civilization beside Black Flag and the Circle Jerks) and played in the all-girl feminist punk band Castration Squad. But for Phranc, something was still missing. “I always loved punk rock, but I could never really hear the words,” she admits. As a reaction to the white supremacy then entrenched in some circles of the punk scene, Phranc penned “Take Off Your Swastikas,” performing it on acoustic guitar “so you could hear the words.” The sonic call-to-action signaled the advent of Phranc’s solo folk career as “The All-American Jewish Lesbian Folk Singer.” She still performs the song, which remains all too relevant, today. “There are some songs that unfortunately don’t need to be rewritten,” she reflects, nearly 40 years later.

Following the death of her brother in the early Nineties, Phranc retreated from performing for several years and focused on her visual arts career, including her drag king impression of Neil Diamond, Hot August Phranc, to which she explains: “I could get onstage because I wasn’t me.” She also started exploring work with cardboard as a medium to create visual art. “The Cardboard Cobbler,” as she calls herself, fashions the paper product into everyday objects, harkening back to her punk days when she would scrounge alleys for free boxes. She advocates, “It’s an equal opportunity medium. Anyone can find a cardboard box.”

For Phranc, OUTsider Fest is “a manifestation of everything I have visualized and hoped for my whole life.” The by-queers, for-queers festival is not only an opportunity to receive feedback on her work-in-progress but a crucial reminder of the importance of LGBTQmmunity. “Without community, I would not be here,” she offers. “I love the fact that there is this queer community that is committed to creating and [to] supporting each other.”

OUTsider Festival hosts Phranc’s performance Fri., Feb. 22, 7pm, at the Vortex. The Legacy Award presentation and an afterparty follow. Badges are available online. Individual tickets are issued 10 minutes before the show after badge holders have been seated. For more on the fest, see our Chron Events listing.