Now, with his first book, Queercore: Queer Punk Media Subculture, Nault returns to the subcultural and radical movement that ignited his passion for queer art in the first place. Nault credits two underground artists in Toronto – Bruce LaBruce and G.B. Jones – with the creation of Queercore in the Eighties. Their zine J.D.’s was a direct, confrontational attack on the sexism, homophobia, and transphobia that ran rampant in the punk scene, while the dominant lesbian and gay cultures moved toward a more conservative mainstream. The two diverging issues inspired a radical multimedia movement of queer and punk artists. By making space for queer folks who’d been rejected by the lesbian and gay and punk communities, Queercore provided a platform in which misfit queers could explore and express their lived experiences.

Nault first discovered Queercore while rifling through records and video stores in the small Massachusetts town where he grew up – searching for anything with a cover that offered a reflection of himself: a young, queer teenager who felt like an outsider. Experiencing “backlash and getting beaten up” for being queer, Nault identified with and felt empowered by the combative nature of the movement.

“[Queercore] was really foundational to my identity and the work got me really excited – not only was it queer but it was also very confrontational,” Nault told Gay Place. “It gave me a sense of boldness and bravery and excitement and a connection to politics.” This passion led Nault to dig into the foundation of Queercore during his graduate studies. A retooling of his dissertation, Nault’s book draws from interviews with national and local queer and punk influencers (including former Chronicle editor and Gay Place creator Kate Messer).

Drawing attention to the symbiotic relationship of queerness and punk at the epicenter of Queercore was one of Nault’s main goals while writing. “What punk was trying to do and what queerness is trying to do is … similar in a lot of ways,” says Nault. He believes both the punk and queer movements are about “being in your face, about bucking the system, and about questioning gender norms.” Through Nault’s analysis, his book reminds readers of the inherently political and radical nature of queerness.

Previous scholarship on radical queer culture from an arts perspective, according to Nault, has largely ignored Queercore due to its underground and controversial nature. His book, however, aims to fill this historical gap, which he hopes will illuminate the work of others in the movement. In fact, he’s already been contacted by several Queercore scholars and artists alike. He hopes this is the “beginning of more” on the movement.

Though many would say the height of Queercore occurred some 30 years ago, it remains culturally and politically relevant today. In particular, bands like Against Me! use their music as a platform to discuss the unique challenges of transgender and genderqueer folks. As Nault explains, “Queercore has a kind of resilience where it can be taken up by the next set of people who feel like they’re on the outside or have something to yell about or something to protest.” 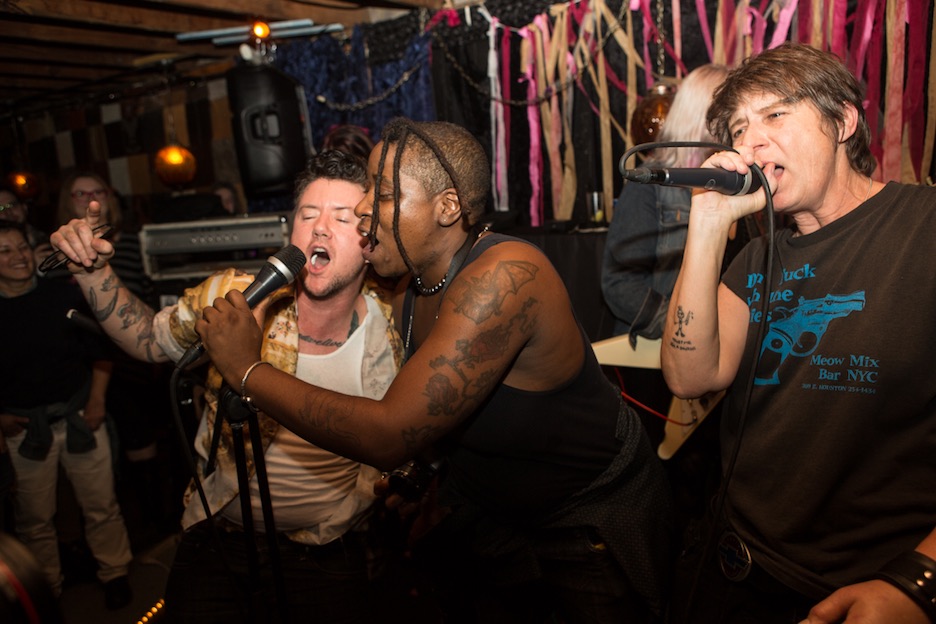 To commemorate the book’s publication, Nault is hosting an event at Cheer Up Charlies tomorrow (Oct. 4), but he says it’s less of a formal release party and more of a celebration. Besides learning more about Queercore, the event features an special performance by the Homomobiles, featuring Lynee Breedlove of the influential Queercore band Tribe 8, and an appearance by the “Qween of the Austin Queer Music Scene,” Gretchen Phillips. Keeping in the pro-accessibility spirit of Queercore, the event is free and open to the public to create an opportunity for the LGBTQ community to come together and experience Queercore the way it’s meant to be. For queers “our relationship is not about money, it’s about common experience [and] goals,” says Nault. “That’s something Queercore holds up for us."

Qmmunity: An Ode to Janna Zumbrun
In praise of our queer elders