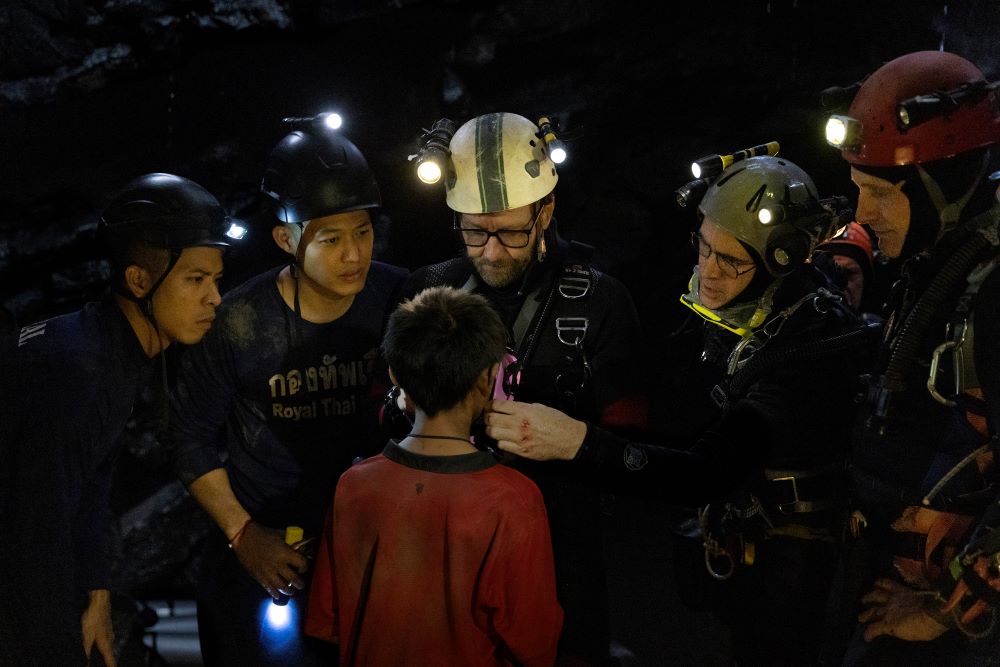 It's not hard to see why Ron Howard would want to direct Thirteen Lives, the ripped-form-the-headlines true adventure of the band of cave divers who volunteered to rescue the Wild Boar football team and their coach from the Tham Luang Nang Non cave in Thailand in 2018. The story undoubtedly resonates with arguably his greatest cinematic success, 1995's space mission drama Apollo 13. Both are stories about calm, quiet men trying to solve a problem upon which lives depend - lives at a distance that is both oddly close and yet impossibly far.

In the case of the Tham Luang cave rescue, the distance is only a few miles, but it's through a flooded, unmapped cave complex. Equally vast is the number of people involved in the rescue, so (in no small part due to the complex rights issues surrounding real life events) for narrative convenience Thirteen Lives settles towards the grumpy realist Richard Stanton (Mortensen) and the gentler if no less clear-eyed John Volanthen (Farrell). Two of the first rescue divers on the scene, they're treated with a degree of suspicion on arrival: after all, if the entire Thai nation can't get 13 kids out of a flooded cave, what do these two pale, soft-spoken foreigners think they can do? Well, as events turned out, rescue all 12 teams members and their coach. This is what they do: upend their very average lives to fly around the world and risk their lives in cave complexes to save people.

What may be most astounding about Thirteen Lives is that it feels like a nail-biting 90 minutes, not the gently flowing two and a half hours it is. This isn't simply brisk, it's non-stop. And there's nothing self-indulgent about it. Instead, Howard (pardon the double oxygen and confinement pun) gives everyone's story space to breathe. That's how he avoids this becoming a white savior narrative about a bunch of British and Australian dudes bravely risking their lives to save these Thai boys: although ultimately that is exactly what happened - the international team kept diving after the Thai SEALs were called off. But this isn't some testosterone fantasy. The SEALs stopped diving because they were not the right divers for this, and had lost one of their own in the caves, and the pain in their eyes as they are forced to step aside is obvious. (Howard makes sure to dedicate the film to both Saman Kunan, the retired SEAL who drowned, and a second SEAL, Beirut Pakbara, who died of an infection acquired in the cave two years later.) Outside, the families are given time, as is the incredible work of Thanet Natisri (Boonya), the water engineer from Chicago who just happened to be in Bangkok and ended up running a massive operation that diverted tens of millions of gallons of water from the hillside onto nearby farmland. Howard even gives tribute to the farmers that agreed to let their fields be flooded.

Like Apollo 13, Thirteen Lives is a rejection of the myth of the rugged individual. Instead, it's about people working in interlocking isolation to the same goal, and it is a good goal, and it's not about praise or recognition. That's why the divers are the perfect Ron Howard heroes - because they'd shuffle their feet at that honorific. They're a bunch of lanky, skinny guys who are all quiet business in public and exhausted in private, making the casting of Farrell and Mortensen - two of the softest-spoken leading men working today - all the more perfect. They're just blokes who happen to be very good at diving in caves, who know other blokes who are very good at diving in caves (including Edgerton as Harry Harris, the Australian doctor who helped formulate the crazed plan that ultimately saved all the boys).

But it's in those caves that Howard really shows what an astonishing filmmaker he remains. Most diving films are set in the open sea because, well, that's where most diving happens, and it's a lot simpler to film in a million gallon tank than in a recreated narrow, rocky passage with stalactites and stalagmites (although neither is what anyone would call "easy"). Howard and and cinematographer Sayombhu Mukdeeprom (Uncle Boonmee Who Can Recall His Past Lives, , the Suspiria remake) recreate the sense of confinement and sheer grueling physicality of six hour dives into blackness.

It's the noise of it that makes Thirteen Lives so brilliantly tense. Kudos to sound designer Michael Fentum, supervising sound editors Oliver Tarney and Rachael Tate, and their team for making every rushing current, every clanging tank, every escaping air bubble only increase the intensity of the experience.

But what makes that nail-biting drama all so special is that contrasts with the simple mundanity of the men. Anyone who has seen Elizabeth Chai Vasarhelyi and Jimmy Chin's excellent documentary on the rescue, The Rescue, will go in to Thirteen Lives expecting them to be low-key, and Farrell, Mortensen et al keep them that way without the ensemble ever becoming a morass of interchangeable hollow men. Instead, it captures how they have no room for macho braggadocio. They posture, they die, or the kids die. As the impossibility of the situation becomes clearer, and their plan becomes even more daring, the calmer they must remain. The only expression of emotion comes after the rescue, in a scene of sheer relief and release. They did their part, which took other people doing their part, and Thirteen Lives is a beautiful depiction of the power of working together for hope. All too often, in life and in cinema, systems are shown as working simply to oppress: Thirteen Lives reminds us that communal acts can be what literally save us.