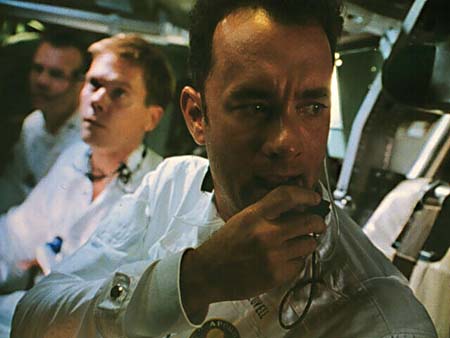 Ron Howard's take on the ill-fated 1970 moon shot is a big step forward from his previous two films -- Backdraft and The Paper -- which seemed to get lost in a variety of non-user-friendly subplots and were generally muddled exercises in how an excellent filmmaker can get lost in his own story. Apollo 13 has no such problems, and as such, it's a riveting, nail-biting, two-buckets-of-popcorn return to form for Howard, filled with the almost unassailable heroics of the United States space program and the genuine urgency of history. Leads Hanks, Paxton, and Bacon, as astronauts Jim Lovell, Fred Haise, and Jim Swigert, respectively, are all excellent, as is Harris as Mission Control leader Gene Kranz. The story, by Texans William Broyles, Jr. and Al Reinert, is equally compelling, playing up the interesting notion that by the time this third moon shot came around, not even the media was very interested in the space race anymore (an estimated 3 million fewer viewers watched the Cape Canaveral lift-off than the previous moon launch) until something went awry. That something was an explosion in one of the ship's heating coils that sent the ship into an uncontrolled roll and left the astronauts, who were three-quarters of the way to the moon, with a rapidly dwindling supply of both oxygen and power. Howard pulls out all the stops on this one, pumping up the audience's emotions with help from James Horner's well-placed, not-quite-as-over-the-top-as-you'd-think score and the astronauts' red-white-and-blue courage in the face of danger. It's almost a valentine to NASA, but without the celestial mythologizing of films like The Right Stuff. From Quinlan's take as Jim Lovell's long-suffering and supportive wife to a thoroughly unexpected cameo from B-movie king Roger Corman as a congressman, Apollo 13 is filled with finely nuanced performances. For once, Kevin Bacon's characterization doesn't seem to be crying out “Remember me? I was in Footloose!” Oddly, some of the integral special effects in the film -- and they are integral -- seem less than perfect. One shot of Sinise -- as astronaut Ken Mattingly, who was bumped from the Apollo 13 mission just two days before launch -- watching the Canaveral blast off from afar seems especially contrived, but these are really minor quibbles. Apollo 13 succeeds on its own merits and may be the only summer adventure blockbuster without bullets or warheads. At the risk of sounding like Michael Medved, that's a welcome change of pace.