Death By Festival Counts Down to 10/31 Halloween is nearly here, and new hybrid heavy metal/horror film gathering Death By Festival is getting in the seasonal mood by announcing the first screening ever of new anthology horror 10/31.

This is the latest in the current wave of anthology horrors produced by P.J. Starks, who already worked with Seaman and Holt on 2016's Volumes of Blood: Horror Stories, and is currently shooting Cryptids with Holt, Seaman, DeJager, and Kuhn, plus Zane and Adam Hershberger.

That's not the end of this announcement, with 14 shorts (including the Texas premiere of "Fish" starring horror icon Bill Moseley of The Texas Chainsaw Massacre 2) joining the world premiere of twisted Brazilian shocker Coffin Joe’s Heart of Darkness and Texas debut for gory nightmare American Guinea Pig: The Song of Solomon. Plus, after the screenings, there will be a night of heavy and hard music, including necroclassicist Goatcraft, Texas metalcore crew Shattered Sun, and David Vincent of Morbid Angel.

Tickets for the epic 14-hour show on Oct. 28 are on sale now ($20 for music only, $30 for music and film, $65 VIP) at eventbrite.com. Further information at www.deathbyfestival.com. 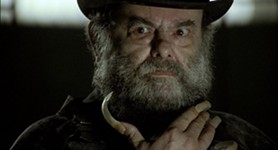 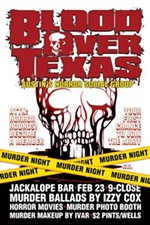 You're Going to Get Red On You...
Blood Over Texas holds debut meet up