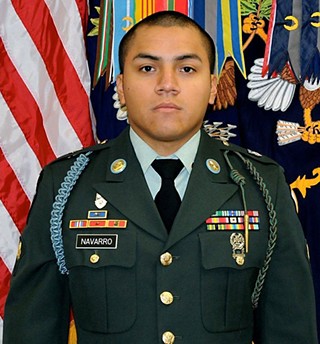 The Austin ISD Board of Trustees voted on Monday night to change the name of Sidney Lanier Early College High School to Juan Navarro ECHS, after a former student and veteran who died in action in 2012. The new name will become final "contingent upon the name-clearing criteria in Austin ISD policy," per a district official – that is, after the district conducts a background check.

The 5-2-1 vote followed a motion to drop just "Sidney" from the school's name – presented by the trustee whose district includes the school, Ann Teich – which failed on a 4-4 vote (at-large Trustee Cindy Anderson was absent due to a family emergency), prompting what Teich called her "Plan B." From the dais, Teich reiterated her stance that the majority of the Lanier community preferred to just drop "Sidney," and that she was concerned about the costs associated with renaming the school. But, as Teich told the Chronicle on Tuesday, she had a sense that her fellow trustees would neither support just "Lanier" as a new name nor postpone the decision yet again, so she decided to put forth U.S. Army Sgt. Juan P. Navarro's name – in part because there was some community consensus around that choice. "It was the only choice I was left with that I felt comfortable with," Teich told us. "When the trustees put my back up against the wall, I had to do what was best with what was available."

Navarro grew up in the Rundberg area and graduated from Lanier in 2007; his friend Manuel Muñoz, a local leader in the League of United Latin American Citizens, helped organize a petition of more than 900 signatures calling on the board to name Lanier for Navarro. In 2012, AISD considered naming what is now Guerrero-Thompson Elementary after Navarro, but the district's policy mandates that school namesakes, if not living, be deceased at least 12 months. (The policy now allows for an exception to this rule if the honoree is killed in the line of duty.)

The Navarro alternative, which was not one of the three recommended by the school's campus advisory council, appeared to catch some trustees off guard. After a period of confusion, Teich's motion prevailed, but without the support of trustees Amber Elenz and Jayme Mathias. The latter has clashed publicly with Teich as the board has implemented its 2017 decision to rename schools whose namesakes served the Confederacy; Mathias voted against the new name in protest of what he saw as a rushed and nontransparent process.

On Tuesday, Board President Geronimo Rodriguez reflected on the vote, telling the Chronicle he was "proud of the civil, respectful" way in which the board debated the issue. Rodriguez said he felt comfortable voting for Navarro as the school's new namesake because "of the contingent nature of the vote," applauded Teich's willingness to present an alternative, and was glad to rename Lanier for someone who would "reflect the community they represent." (The school is more than 80% Hispanic.)

With Lanier done, the district has officially renamed all but one of the facilities identified by the board in 2015; a decision on Eastside Memorial ECHS at the Johnston Campus has been postponed until the school completes its move to the Old Anderson campus on Thompson Street in 2021. Both Mathias and Teich on Monday called for AISD to consider renaming other schools – primarily in West Austin – whose namesakes were slaveholders, such as Austin High, Bowie High, and Lamar Middle School, so these debates are likely not over.