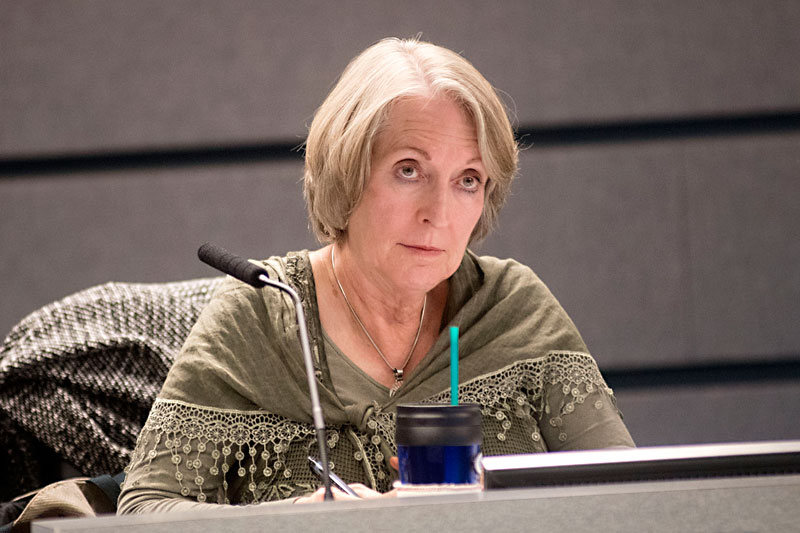 AISD Trustee Ann Teich won't act until she knows "what the faculty and students at Lanier want me to do." (Photo by John Anderson)

Following a contentious discussion about renaming Lanier High School at the March 5 Austin ISD Board of Trustees meeting, several trustees met with teachers and students on Monday, March 11, to hear arguments for and against renaming the North Austin campus. The meeting was organized by District 3 Trustee Ann Teich, who represents Lanier, as a "listening session" for her colleagues to hear the skepticism that she and the school community have shared since the Confederate names controversy hit the district in 2015.

Trustees Amber Elenz, Kristin Ashy, Arati Singh, and Cindy Anderson heard from staff and students, a majority of whom favor simply dropping "Sidney" from the school's almost-never-used-anyway full name that honors the "poet laureate of the Confederacy," and thus saving the cost of a name change. Pointing to needs such as missing doors in the boys' bathroom stalls, they told the trustees they'd rather direct spending there; while the district has estimated a $77,000 cost for renaming a high school, others have suggested it will be much higher. To alleviate those concerns, the school board has asked the Austin Ed Fund to accept restricted donations to help pay for campus name changes.

One student who attended the meeting, Sandy Romero, said AISD "should be focused" on investing in resources that "could make the school better," and implied the district may have over­reacted to the nationwide movement to remove Confederate monuments from public spaces. Lanier's student council president, Litzy Rodriguez, echoed others who noted students don't identify with the school's namesake, but with the school community. "We are not represented by Sidney Lanier; we represent us," Rodriguez said. "We are not him, we are us."

There appear to be enough votes on the board to rename Lanier (previous renamings passed easily), but trustees would like to abide by their unwritten rule that items exclusively affecting one campus be brought forward by the trustee representing that school. And Teich reiterated her refusal to do so until she knows "what the faculty and students at Lanier want me to do." Interviews with several trustees reflect exasperation over the lengthy process, but they recognize the sensitivity of the issue and are following Teich's lead, waiting for consensus from the Lanier community.

But District 7 Trustee Yasmin Wagner did not mince words in expressing her frustration at the March 5 meeting, saying she was "sitting with an intense feeling of disappointment with this board." Wagner pointed out that a supermajority of the board had voted to rename five other AISD schools, yet "we sit wringing our hands, wanting to go back and rehash the same conversations ... in hopes of getting a different result. It is intensely unfair to the Lanier community that we have been sitting on this for 13 months."

A version of this article appeared in print on March 15, 2019 with the headline: Skepticism Remains on Lanier Renaming