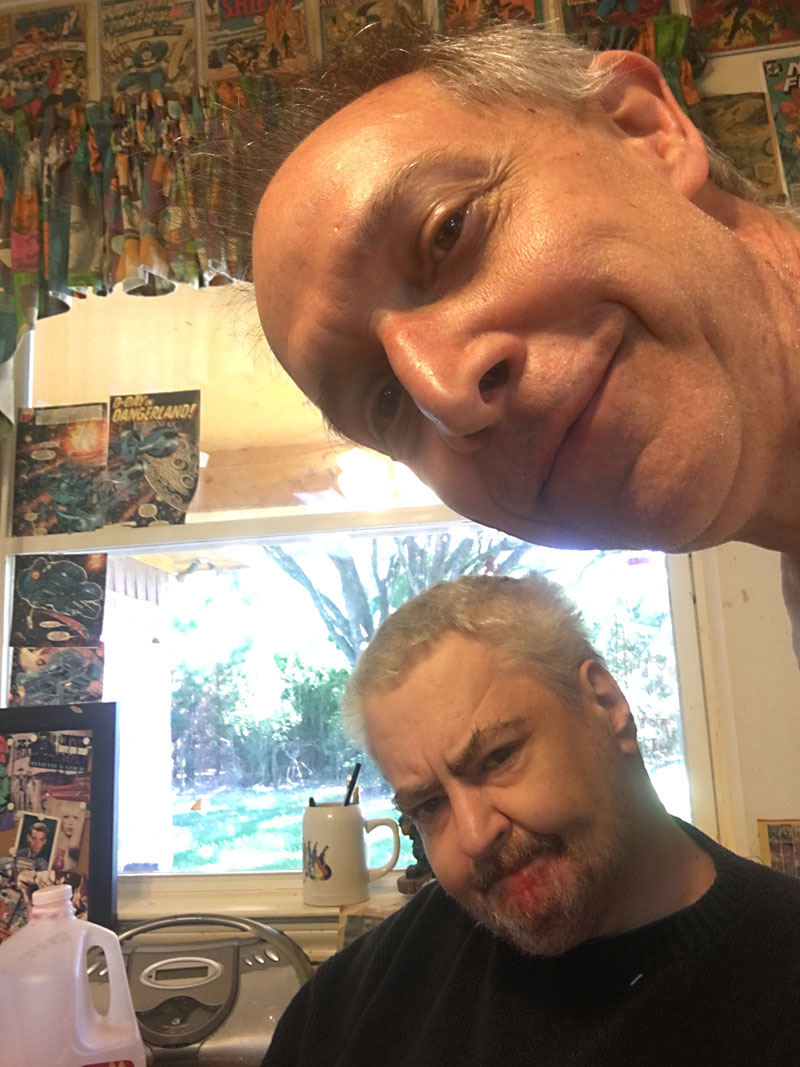 Brian Beattie's selfie of him and Daniel Johnston (l) in Waller, Oct. 2017. "He has a soul patch of a red juice stain on his chin," writes the producer. (Courtesy of Brian Beattie)

In January 2018, Chronicle writer Kevin Curtin spoke with cult legend Daniel Johnston ahead of Austin's inaugural Hi, How Are You Day concert. The outsider artist's performance at the show wound up being his last before passing on Sept. 11, 2019. In what became his final published interview, Johnston offered a reveal:

"I've been working on a new album with Brian Beattie for years, and I hope it comes out real soon."

The LP pulls from sessions spanning 1996-2003, during which the duo also recorded Rejected Unknown and Lost and Found. Johnston's spur-of-the-moment recording requests met their creative match in Beattie, who the Chronicle dubbed a "Mad Scientist on Wheels" in 1996 based on his transportable rig. The producer's frequent trips to Waller ended due to disapproval from Johnston's father.

Following an urging call from Johnston in 2017, Beattie transferred the old files and began assembling the 14-track collection, including theatrical spoken interludes on the B-side. Beattie distinctly recalls the last of many trips to collect feedback on the mixes. Johnston wanted to go to Buc-ee's first.

"He had already planned out whatever big, weird plate of fried shit he was going to get," adds Beattie. "He started talking to me in this deep, spiritual, business contract [manner]. He said, 'Brian, for all those recordings we've done, never ever put anything out that's just me playing by myself. It can't be that way. You have to produce it.'"

Where the enthusiastic producer hears an album, complete with instrumental additions by himself and other musicians, Johnston's longtime manager Tom Gimbel, also general manager of the Austin City Limits TV series and co-founder of the nonprofit Hi, How Are You Project, characterizes If as "outtakes from other sessions."

"There was really never a project that Daniel would say no to," adds Gimbel, who cites other obstacles to releasing the material. "It's a combination of trying to put out the best representation of Dan's work, and the family needing to be able to make some money off of this music." Designer Tina Rataj-Berard of TNT Creative Services dreamt up this tribute, which Reagan Outdoor Advertising will bounce around unoccupied billboards throughout Austin for the rest of 2019. (Photo by Jana Birchum)

Last year, both sides lawyered up in unsettled efforts to release If on Johnston's own Eternal Yip Eye imprint. Gimbel says the fee requested by Beattie was too high to recoup expenses. Beattie also wanted to press a vinyl version with another label.

On point with his offbeat antics, Beattie set up on South Congress during South by Southwest with a laptop, headphones, and a sign reading, "Ask me about the new Daniel Johnston record!" He says listener feedback confirmed that he wasn't the only fan of the unearthed material. Along with his writings on If, Texas Highways editor Michael Hoinski posted a bootleg version of album opener "Without Love" on Twitter earlier this year.

The track captures Johnston's untamed piano lines and bittersweet musings on his supreme songwriting subject, the overwhelming power and futility of human connection. Daniel's edition of love is splattered all over the album, most succinctly in another song's inquiry: "Love was like a piece of cheese with a hook on it ... You really thought that I would fall for it?"

Hoinski also unleashed a seven-minute cover of Carole King's "You've Got a Friend," with a completely unrehearsed ensemble including Butthole Surfers guitarist Paul Leary. Although he doesn't remember the particular 1996 session, Leary can relate to Beattie's adventures recording the schizophrenic and manic-depressive Johnston in his parent's garage. Both producers landed on the description "surreal" in our interviews.

"There was a lot of weird stuff I was in love with, but Yves was concerned it would come off like we were taking advantage of a crazy person," Leary says. "We ended up trying to make a standard set of songs, and I don't know if anybody was really happy at the end of the day."

Earlier this month, during a tribute at the Mohawk, the singer's brother Dick Johnston announced a new screenplay of his brother's life with Jason Nodler, creator of the Speeding Motorcycle rock opera. In 2010, cinema duo David & Jordan Miller publicized their own work on a movie about the local oddball. The Johnstons exited that deal a year ago due to lack of progress.

Gimbel hopes to put out a covers album in 2020, with famous Johnston fans taking on the artist's unreleased home recordings or song ideas. Jason Falkner is interested in producing the project, and Dick is at work sorting through over 1,000 archival cassettes.

"Now, all the work with Daniel's catalog, his art, his merchandise – it absolutely continues," emphasizes the business lead, whose ads for a $60 Hi, How Are You doormat have been popping up on my Instagram feed. "If anything, it increases in terms of the energy and focus."

Despite the uncertainty of If, Beattie plans to blaze forward with his own recordings of Johnston. He estimates that in 30 unused hours from their various sessions, there are at least two more full albums to be made.

"I have a responsibility to Daniel," shares Beattie from his South Austin studio, situated next to his cozy home. "I never did anything but follow his instructions, and he wanted to see it come out." Early voting is now open for the Nov. 5 election. The Chronicle editorial board advises voting against Prop B, echoed by music advocates in the Red River Cultural District including Empire, Mohawk, Stubb's, and others. Revisit "Historic Approval of City Tax Fund for Local Music" (Sept. 27) and "Music Advocates Say Convention Center Expansion Key to Unlocking City Funds" (July 5) for more on the musical side of the Convention Center debate.

Drummer Kevin Bybee, 42, died Oct. 2. Friends gathered last Sunday at Kinda Tropical to celebrate the prolific artist, who played in Austin acts the Arm and This Microwave World, among many others. Friend/bandmate Sean O'Neal remembers Bybee as "a steadying presence in every band he played in ... a constant and reliable backbeat."

SouthPop becomes AusPop: The South Austin Museum of Popular Culture migrates north up Lamar Boulevard on Sunday to its new location behind Threadgill's Old No. 1, where it will rebrand as Austin Popular Culture Museum. "The Ballad of Jim Franklin: Old, New and Weird" christens the new locale with a 2-6pm members-only event and membership drive. Sign up now to access the artist meet and greet, music from the Austin Pop All Stars, and more: www.southpop.org.