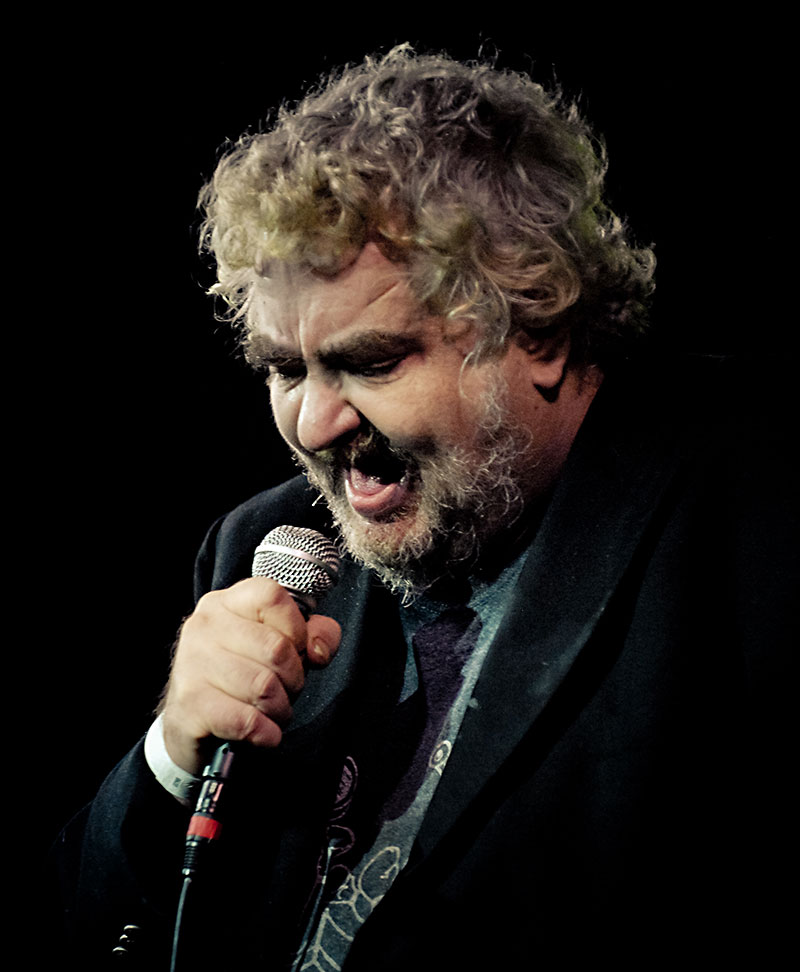 "People call it Jeremiah, like Jeremiah from the Bible, but it's not really the frog's name," clarified Daniel Johnston about the happy, tentacle-eyed amphibian famous from both his 1983 cassette Hi, How Are You: The Unfinished Album and the mural at Guadalupe & 21st Street. "I didn't have a name like that for the frog. I always called it the Innocent Frog.

"He's full of innocence the way I was back then."

The inimitable artist – whose lo-fi songs have been covered by Tom Waits and championed by Kurt Cobain, whose drawings of ducks, boxers, and Captain America sell in art galleries worldwide, and whose schizophrenia and manic-depression were explored in the 2005 documentary The Devil and Daniel Johnston – has recently endured a rough go that includes hospitalization, falling, and frequent adjustments to his medication – his sister Margy Johnston told "Playback."

Nonetheless, the singer was upbeat last Friday when speaking by phone from his home in Waller, recalling the day in 1992 he painted the frog on the side of Sound Exchange, an erstwhile record store that kept a box of his cassettes by the cash register.

Former Sound Exchange employee/current Chronicle Listings Manager Mark Fagan says Johnston was a regular at the shop, often with a stack of drawings to sell to employees or trade for Beatles records. He says they supplied Johnston with a ladder and some paint one day, and the mural was done in a half hour. The initial rendition, he says, included flying eyeballs, but the neighboring church complained about the "satanic imagery." They were eventually painted over.

Today, most know the iconic image from its overhanging phrase: "Hi, how are you."

"When I was growing up, after church, everybody shook hands and would say, 'Hi. How are you?'" recounts Johnston. "I always heard it, even at the funeral home when there was some dead person who died of old age. The undertaker said to me, and I was just a little boy, 'Hi. How are you?' That's how that started.

"Then, when I worked at AstroWorld, I found a container in the garbage that held rubber frogs," he elaborates. "It had a picture of a frog and it said on it, 'Hi. How are you?' So I decided to name my album Hi, How Are You."

The Innocent Frog and its accompanying query remains omnipresent as a cultural landmark. You can buy it as a doll, a doormat, or a coffee mug, and now it's being used to frame discussions about mental health. The first-ever Hi, How Are You? Day, coming this Monday, Jan. 22 – Johnston's birthday – literally and figuratively puts a question mark on the artist's trademark phrase. Organizers envision it as a time for people to open up, in-person and online, about their mental well-being, thus eroding stigmas that keep us from talking about our issues.

"The Jeremiah mural has been staring us in the face for 25 years saying, 'Hi, how are you,' and we've overlooked the potential for something much more profound," says Daniel's longtime co-manager Tom Gimbel, who founded the Hi, How Are You Foundation with partner Courtney Blanton.

Blanton says the community's familiarity with Johnston and the Innocent Frog affords a comfortable environment for people to start sharing about their, or a loved one's, depression, anxiety, and mental illness.

"When I think of Jeremiah the Innocent, I'm reminded that people with mental issues are just that: innocent," says Blanton. "We don't choose this."

The effort coalesces at Mohawk with performances from Glass Eye's Kathy McCarty, still noted for 1992's all-Johnston cover LP Dead Dog's Eyeball, Lift to Experience singer/guitarist Josh T. Pearson, and Moving Panoramas with KUTX's afternoon deejay Laurie Gallardo. The gathering, benefiting SIMS and the new foundation, also features an art show including Johnston originals. While the celebrant himself isn't guaranteed to attend or expected to perform, he may yet feel compelled.

"If they're having a get-together in my honor, then I think I should play a few songs when the crowd's there," declares Johnston unprompted. "All I would need is a microphone and an amplifier, and I could bring one of my own guitars."

What would you sing?

"'Casper the Friendly Ghost' and maybe some new ones. I've been working on a new album with [Austin's] Brian Beattie for years, and I hope it comes out real soon."

Rapper Merlyn Wood may be the biggest MC out of Austin, well, ever. Largely unknown while attending the UT School of Architecture, the 21-year-old local (real name William Wood) posted his college withdrawal documents on Twitter in May and headed to California to join his collaborators in Brockhampton, a hip-hop "boyband" founded in San Marcos in 2015 by Kevin Abstract. The collective has released a trilogy of LPs since last spring, gotten booked for Coachella, and has an album (Saturation III) currently charting on Billboard. Brockhampton's Love Your Parents tour hits Emo's Saturday.

The Best Songs on Lolita Lynne's new album, Fools Moon, read like love letters and breakup notes found on a nightstand after waking up alone. "Don't you want to break me in two, or am I another girl who paws all over you?" inquired Lolita Carroll Larriva with sultry, spellbinding delivery on gripping original "I Won't" during last Friday's album christening at Barracuda. Daughter of Tito & Tarantula bandleader Tito Larriva, she enchanted thoroughly with impeccably penned, personal songs delicately executed by an ensemble of trumpet, violin, upright bass, synth, and Latin-leaning beats. The outfit kept the room hushed until detonating must-hear single "Enslaved," which clarifies their genre: brooding lounge pop.

Doom Side of the Moon, the Sword spin-off that transmogrifies Pink Floyd into heavy doom rock, surprised fans with the Encore EP last week. Extension of the full-length The Dark Side of the Moon cover last August, the three-song platter further plumbs the UK psych heroes' larger catalog with epic results, including highlight "Have a Cigar," in which Jason Frey's space rock saxophone breaks orbit and then crashes into bandleader Kyle Shutt's black matter guitar. Encore streams now, while sludge-green 12-inch vinyl arrives in March.