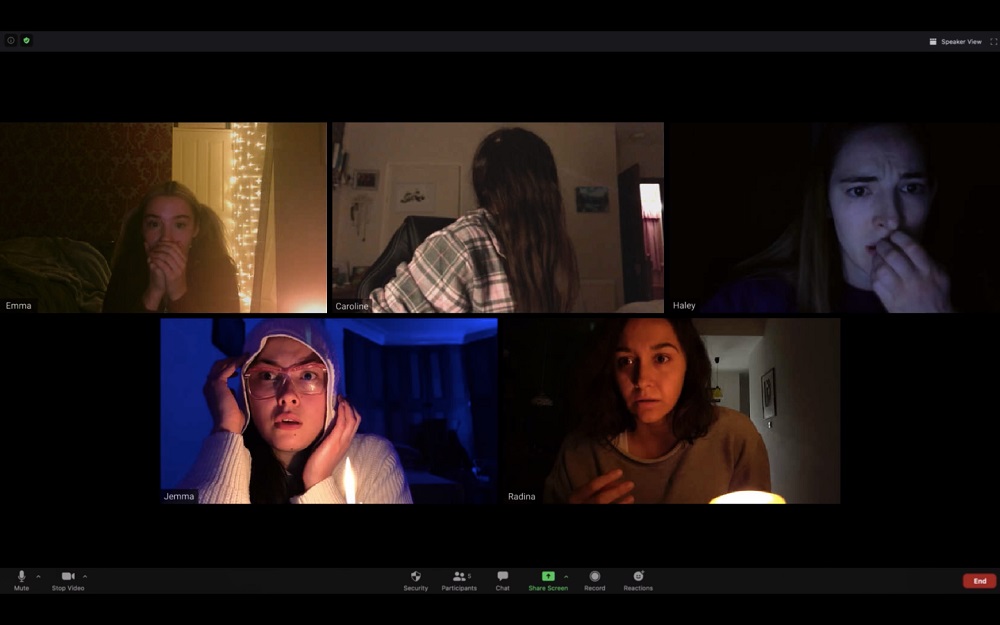 Found footage is a term that is often misapplied. It's become a coverall term for POV cinema (which sounds a little too film-school-pretension for most tastes), and a slur aimed at low-budget horror - as if creating a narrative using a single viewpoint is any less creatively challenging than a multi-camera steup. Host is neither a lazy The Blair Wictch Project knock-off, nor running through established ruts. Instead, it's one of the most brutally innovative horrors of the last few years, and all done through windows on a computer screen.

The format (and don't let anyone tell you otherwise) is most definitely not found footage. Instead, the viewer is the eighth, unseen lurker on a Zoom call between friends. Found footage is about finding a relic: Host is immediate, placing the viewer as a terrified witness to what's happening onscreen in real time.

The other participants are six friends, getting together for a coronavirus virtual party. At the suggestion of Haley (Bishop), they've decided to hold a virtual seance, lead by her regular psychic (Baxter). No one takes any of this too seriously, until little hints - a light, a noise, a movement - suggest that they may have opened the virtual door to something older than the internet, and more malicious (if that's imaginable).

Director Rob Savage (who also cowrote with Gemma Hurley and Jed Shepard) makes one nod to The Blair Witch Project, by having the actors use their own names for the characters. But the more overt influence here seems to be 1992 British Halloween special Ghostwatch. The BBC staged a 'live broadcast' from a home with a supposed ghost: even though it was advertised as a drama, the fact that it looked like a news show and used a coterie of real news and current affairs broadcasters as themselves, people felt it was real (Imagine if the 60 Minutes crew did a reenactment of Poltergeist mid-show, and you'll understand the confusion). It was the immediacy, the intimacy, the recognisability that made it so powerful. Plus, writer Stepphen Volk and director Lesley Manning understood how broadcast TV technology worked, and built that into the fabric of the story. That's what Savage emulates, and it's not just there as set dressing: the narrative and the scares don't work without it. There's the general, ubiquitous experience - the use of lag, dropped signals, image artifacts - but then there are platform-specific terrifying tools deployed, like video backgrounds, and how many windows are on screen at any time.

What's most impressive is how easy Savage makes it look (and ask any director of a POV drama and they'll tell you that the toughest demand is to make it effortless). Everyone's talked about making a Zoom film in lockdown, but he (with each performer in isolation, acting as their own cinematographer, set designer, and assistant director) has created something more than just a bunch of performances in frames. Moreover, what he creates is so lean. The convention of the 90 minute horror often drags films beyond what the story needs, but Savage pulls it all back to the absolute minimum. The result is a breathless but rounded sub-one-hour drama that feels real because it avoids excess exposition. We don't need to know why Haley is the only American in this group of British friends, or why Edward is their token male friend allowed into girls' night: the characters all know each other so well that they wouldn't drag that back story into the conversation. The dynamics are revealed through the interactions, and that lets Savage tell a story that is all muscle and bone, sinew and teeth, perfect build and tension-ratcheting jump scares.

Other films have taken a similar approach to screenlife technohorror, with outcomes both fine Unfriended: Dark Web and foul Unfriended. Even if Savage didn't ground the film so perfectly in the inherent social terror of moment - setting this specifically in the time of pandemic, where Zoom parties aren't a thing, they're the only thing - Host would still be a nerveshredder. With those added modern nightmares, it becomes as perfectly distressing as a needle under your fingernails.

Host is available now on Shudder.