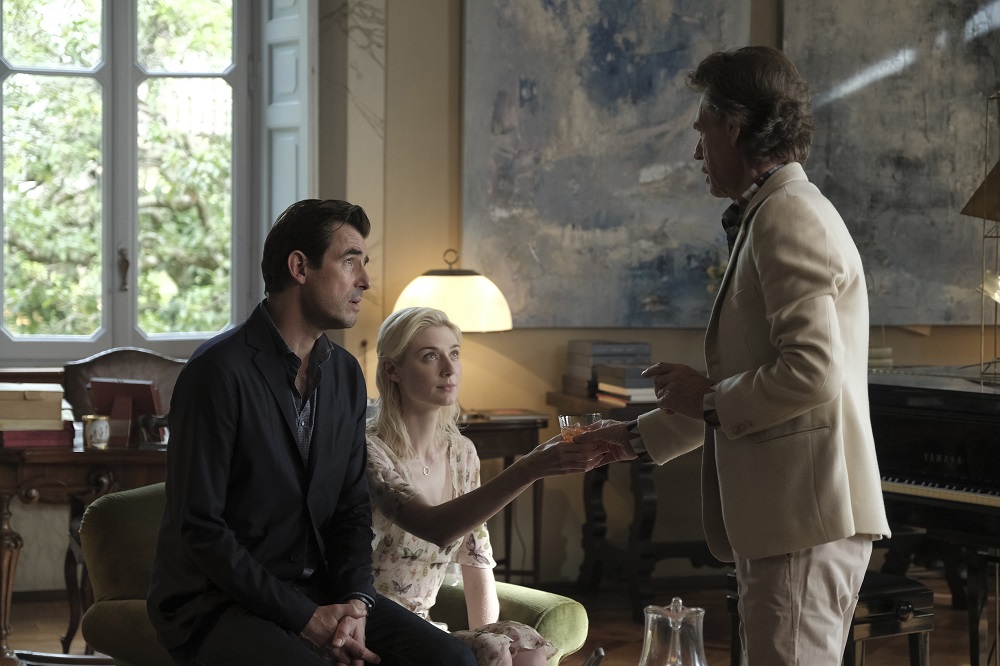 No, before you ask, this is nothing to do with the trademarked colors of the University of Texas.

Giuseppe Capotondi's freeform adaptation of Charles Willeford's 1971 noir novel of art, fraud, and violence in Florida is as much a philosophical treatise on what creates value in a painting as it is about making off with a priceless haul. James Figueras (Bangs) knows how to create the myth of worth: An art critic, washed up in Italy and reduced to peddling copies of his book to tourist audiences semi-convinced of a genius he knows doesn't exist. His mediocrity is disturbed by two intrusions: A less-than-average American tourist, Berenice Hollis (Debicki), who seems riddled with enigmas and attracted to his ragged charms, and an art dealer, Joseph Cassidy (a bizarrely-cast Jagger), who hires him for a strange mission. It seems that a reclusive artist, Jerome Debney (another wonderfully textured late-era performance from Sutherland), once the toast of the art world, is living on a corner of Cassidy's estate. The dealer wants his last, unseen work, and Figueras - desperate to re-establish his own shattered credentials - seems the perfect proxy to enable its procurement, by fair means or foul.

Bang (probably best known to American audiences as the titular bloodsucker in the Netflix adaptation of Dracula) finds himself in the middle chapter of an de facto trilogy about art and the art market. In The Square he was a curator caught up in the clutches of controversy and the outer reaches of what can be called art. More recently there was The Last Vermeer, in which he plays an Allied captain in post-war Holland, exploring whether a painting is a fake or a lost masterpieces. The Burnt Orange has thematic links to both, beginning with Figueras delivering a lecture on the value of provenance: The techincal merit and visual appeal of a work is defined by who made it, when, where, why. grasps the Bang carries the weight of mediocrity with him. But what weighs him down most is that he understands his own lack of importance and heft. When Cassidy mocks him for his middling tastes and mediocre aspirations - and, in doing so, his lack of skills in detecting a fake - he replies with a broken defensiveness.

Unfortunately, the digressions into an unformulaic art heist plot can't cure, and often exacerbate, The Burnt Orange Heresy's habit of dragging interminably whenever it focuses on anything other than James, Berenice, and Jerome. There's an undeniable spark between the lovers - her with her secrets, him an open book of bad habits and needs, the way they adapt nicknames for each other that harken back to earlier crime flick protagonists - even if the script by Scott B. Smith has almost nothing to do with Willeford's original novel. It's not just the shift of location from Florida to Italy, but every interaction. If anything, it's closer to the switchback betrayals and deep depictions of shortsighted motivations of his own book, A Simple Plan, which he adapted for Sam Raimi in 1998.

The problem is in the intersection. Those playful, sometimes academic, often meditative exchanges about identity and worth, in art and in people, sit awkwardly within a crime film that's burdened with obvious betrayals and an extremely heavy-handed metaphor about flies. There's a constant refrain about the multiple masks we wear through our lives: if The Burnt Orange Heresy had just picked one, it might have been a better film. 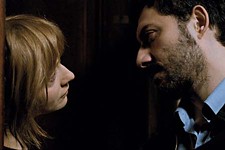