The classic globe-trotting adventure story was the mainstay of Hollywood for decades, but its shared roots in the great white hunter narrative of the image of imperial expansion have made it basically moribund. Missing Link, with its reliance on so many of the genre’s tropes – the red string on a map, the bold explorer in tweeds – might seem forced to subvert those standards. Instead, this delightful stop motion animation doesn’t need to subvert anything, instead finding the wonder of seeing the world with fresh eyes and new friends.

Animation studio Laika’s first four stop motion films – Coraline, ParaNorman, The Boxtrolls, and Kubo and the Two Strings – have focused on a child dealing with the magical mysteries of the world, often as a way of processing the path to adulthood. In Missing Link, it’s finally adults on center stage – even if they are a little emotionally stunted. At his age, Sir Lionel Frost (Jackman) should know better than to chase around the world hunting for monsters, but this jaunty aristocrat is a child of the age of empire, always trying to find a way to be accepted by the explorers' club – even if that fusty institution would rather shoot Nessie and mount the creature’s head on a wall than study it in its habitat. Still, he takes a bet: If he can find Sasquatch, then the club has to accept him.

But this mysterious, elusive creature turns out not to be so elusive. Sasquatch (Galifianakis at his absent-minded, amiable best) is tired of being the only wild man of the woods. Not that he’s that wild: Sasquatch – who would prefer you call him “Susan” – is a bit naive, terribly literal, and just wants to find the Yetis who live oceans away, who he considers his missing cousins.

Laika’s dedication to the art of stop motion, of pushing the boundaries of what tactile puppetry can do, explains in part why it’s taken Chris Butler seven years since his suburban gothic comedy ParaNorman to deliver Missing Link, but it’s been worth every second of the wait. There’s a gravity, a mass, a physicality to stop motion that even the best 3-D CG animation can never match: That's not a criticism, but merely a comment on the effect it creates, especially in the vibrancy of Laika’s house style. When you’re not drawn in by the astonishing beauty and immersiveness of their globe-trotting adventure (and those seconds will be rare), you’ll be wondering exactly how they do it. (Thank goodness for their traditional mid-credits behind-the-scenes sequence to remind you how laborious this whole wonderful process is, and to make it seem even more miraculous.) As the heroes cross the globe in search of somewhere to belong, you’ll feel the dust of the Old West and the chill of the Himalayas just as much as you’ll laugh at Susan’s sweet naivete, cringe at Lionel’s elegant oafishness, roll your eyes along with Adelina Fortnight (Saldana) as their level-headed fellow explorer, or see the darkness in the brutal Lord Piggot-Dunceb (Fry, turning his plummy upper-crust voice to sinister effect). He’s a villain who combines two of Disney’s finest antagonists – Tarzan’s bloodthirsty hunter William Clayton and The Hunchback of Notre Dame’s religious autocrat, the hellfire-bound Monseigneur Frollo – into a uniquely memorable monster.

After all, what distinguishes Laika is that it has always been a little more prepared to take on serious issues than most of its animation peers, with the understanding that even the youngest audience will get the point. Lionel and Susan’s quest for acceptance and a place to belong may be a tale as old as animated time, but the commentaries – on imperialism, isolationism, big-game hunting, the explorer versus the conqueror, conservationism versus trophy hunting – are core to the story. There’s a even a swipe at anti-science thinking (it’s absurd to think that a plot about evolution should be considered radical today, but here we are). Yet the way it’s all laid out makes well-placed stepping stones for even the teeniest of tinies to start down the right path on these issues.

But most of all, Missing Link is a perfect addition to Laika’s thoughtful blend of action, adventure, and heartfelt tales of growing up. 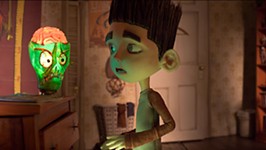 ParaNorman
The animation outfit behind Coraline scores another one for the dark side with this endearingly sweet and spooky ode to the supernatural.