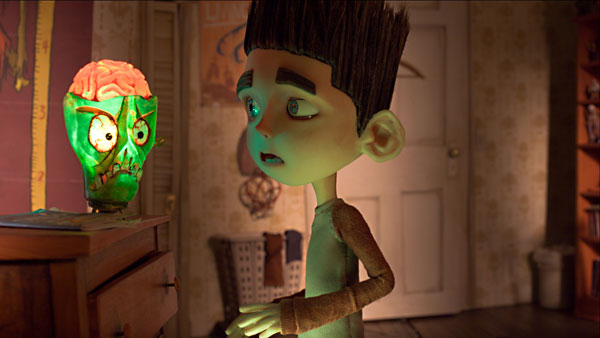 Laika, the animation outfit behind 2009's marvelous stop-motion adaptation of Neil Gaiman's Coraline, scores another one for the dark side with this endearingly sweet and spooky-ookie ode to the living, the dead, and the in-between. Boasting candy-floss colors and a clever, terrorific script – by co-director Butler – ParaNorman pays frequent homage to parent company Universal's legacy of sympathetic outsiders/monsters who, like the eponymous kid hero Norman, tend to get bullied, badgered, and pursued by villagers with flaming torches just for being different. This is one of those extremely rare films we plan on adding to our permanent collection of Halloween screamers when it arrives this autumn on DVD. (And that's saying something.)

Tweenage Norman (Smit-McPhee) can see dead people, and they can see him, too, but this doesn't bother him nearly as much as being bullied by schoolyard thug Alvin (Mintz-Plasse). In between hanging out with his (late) grandmother (Stritch) and watching horror movies, Norman spends time with his equally beleaguered, overweight pal, Neil (Albrizzi), dodging the slings and arrows of daily life and grooving on all thing ghoulie. Until, that is, his mad Uncle Prenderghast (Goodman) informs him that only he, Norman, can save his Salem-esque township from a long-dead witch's curse. Zombies, comedy, and a surprisingly touching dork/jock alliance (via Norman's buff older bro Mitch, voiced by Affleck) ensue.

ParaNorman is notable as much for what it isn't as much as for what it is: It's frightfully free of the saccharine aftertaste of moribund morality that accompanies so much of the major studios’ animated output these days. Norman's stoic, monster-movie geekery is spot-on, and elder "monster kids" who grew up watching Chiller Theatre and such will immediately recognize some of their younger selves in the title character. Laika's stop-motion animation is every bit as inspired here as it was in their rightfully lauded Coraline, and the storyline never wavers from its boneyard-deep message: Being different from others is a good – nay, great – thing, no matter how many villagers (or zombies) are after you.