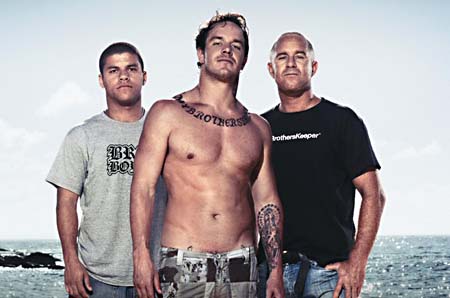 In a world gone mad on instant gratification and resigned to media manipulation, claims of documentary objectivity are being left behind like decaying cars on Alabama highways: relics from a dead time that aren’t bright or fast enough for today’s stimulation-starved viewers. Take the Bra Boys surfing club, for example: Depending on who you talk to, they’re either a second family to dozens of wayward male souls from Maroubra, Australia’s impoverished ocean-side housing projects, or a notorious gang of tattooed thugs ruling the beaches through violence and intimidation. Bra Boys comes down decidedly on the former side of the argument – which seems inevitable considering that its director is Sunny Abberton, one of the leaders of the club and the de facto patriarch of the Abberton clan (four brothers born to a junkie mother who turned to professional surfing and the camaraderie of gang life as their way out of dire circumstances). So you can strike impartiality off the list of this movie’s virtues. That said, the history related here is true: Bra Boys have been involved in countless brawls with other local gangs over the years (footage of which Abberton presents unfiltered); they once got in a melee with a party full of off-duty policemen that resulted in at least 40 hospitalizations; their members took part, one way or another, in the infamous Cronulla race riots that stunned Australia in 2005; and Abberton brother Jai did kill a former club member and throw his body off a cliff. But in Abberton’s movie, the Boys come out smelling like roses every time. Don’t you see? We’re misunderstood defenders of the community! Unheralded heroes protecting the weak! Innocent victims of a corrupt and prejudiced legal system! All-around good guys who just want to surf and drink and dance and get rowdy but who only avail themselves of violence in self-defense! All of this may be true, but with a Bra Boy behind the camera, was the issue really ever in doubt? This raises the question: What’s the goal of documentary film in our post-Michael Moore, 24-hour news, YouTube world, where anyone with a camera can lay claim to the truth? Does truth matter, or even factual accuracy? Or are anthropological curiosity, cinematic seduction, and the power of personality enough? And does any of that matter when you’ve got a subject as damned exciting as the Bra Boys, whose lawless, death-defying tribalism is as good as a shot of adrenaline to a movie viewer’s brain. Let’s hope so, because, in the end, Bra Boys isn’t really a documentary at all but a piece of PR propaganda designed to counteract years of bad press. Beautiful, soaring, exhilarating propaganda, no doubt, but propaganda nonetheless. 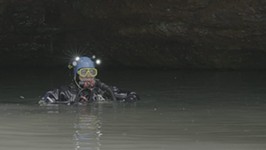 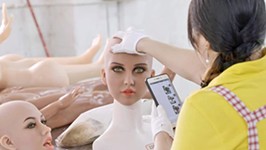